Vice-president Edward Kiwanuka Ssekandi has praised the outgoing Chinese ambassador to Uganda Zhao Yali for his pivotal role played in cementing the cordial ties between Uganda and China.

Ssekandi said Yali, who has been representing China for five years, was not only completing his service in Uganda but had also reached the mandatory stipulated age to serve as an ambassador.

He said Yali was leaving a legacy of distinguished service and exemplary friendship which they were celebrating on Friday at a colourful dinner in his honour at Arirang Hotel in Kampala.

Ssekandi said during Yali's time they had witnessed unprecedented strengthening and deepening of relationship and cooperation between Uganda and China based on mutual respect.

"But most importantly, ambassador Yali has distinguished himself as very talented in commercial diplomacy," he noted. Chinese ambassador to Uganda Zhao Yali, hands over a gift to the Vice President of Uganda Edward Kiwanuka Ssekandi during a farewell dinner for the ambassador

Ssekandi stated that it was during Yali's time that trade between the two countries boomed than never before and that many Ugandan business people had explored different trade centres of China.

"In fact some business people talk of Guangzhou as if it is part of Uganda. China is now very visible in Uganda—look at the ministry of foreign affairs building, the China-Uganda Friendship Hospital in Naguru, the New government building complex and others. All these are Chinese donations to Uganda," he said.

He also pointed out Karuma and Isimba hydro-power projects, Entebbe Expressway, upcoming industrial parks and developments in the oil sector and said all these were very important investments in laying a foundation for Uganda to graduate to a middle income status.

"Ambassador Yali has been a catalyst in all these developments and we thank him sincerely," he said.

The vice-president also said Yali had the affability to be and make friends as he carries out his duties.

"This has been a unique aspect that has enabled him to be a result-oriented diplomat but with a human touch. He has been renowned as a man of a captive smile. No wonder during his time he has stepped up Uganda-China friendship from friendship of small f to Friendship of capital F," he said. 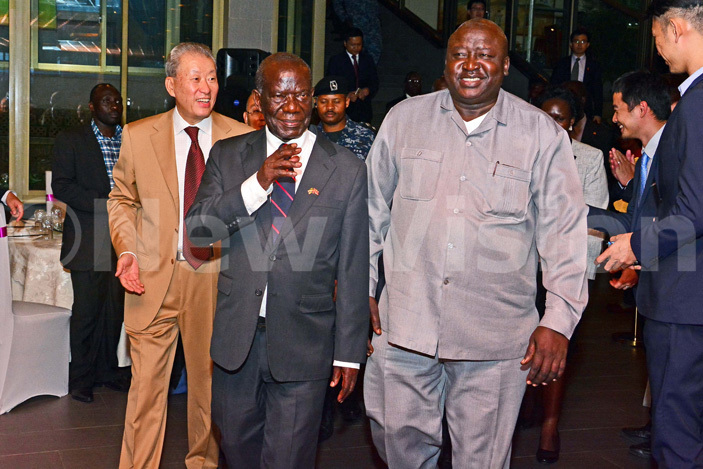 He requested him to remain Uganda's friend forever. "Make it a practice for you and your dear wife to visit Uganda and encourage many Chinese to visit Uganda for investment opportunities and leisure. Be a goodwill ambassador of Uganda in China," he implored him.

To symbolise Uganda-China partnership, Ssekandi raised his own glass of wine at the podium to propose a toast and said: "Long live ambassador Yali and your dear wife. May God bless you and give you more years to serve mankind!"

On behalf of Ugandans, he then presented to him a gift made from Ugandan wool. "And when you look at it all the time you remember Uganda; that you have been here and you have done a very good job," he said to him as he received the gift.

Toasting continued throughout the meal and traditional dancer Annet Nandujja with students from Makerere University Confucius Institute entertained the guests that included leaders of Chinese enterprises and associations in Uganda.

"Authoritatively I can say that having served in the ministry of foreign affairs for the last 14 years, I may have seen approximately four or five Chinese ambassadors coming and going; Zhao has been the most outstanding ambassador in our relationship with China," Oryem revealed.

He said Yali should be given a medal for the hard work and for the fantastic job he did during his time as Chinese ambassador to Uganda.

He said he had also appointed Yali as a special consultant on Uganda in China and requested him to make sure that industrialists who want to come to Africa make Uganda their first choice.

Eng Benon Mugarura, the chairman China-Africa Friendship, Uganda, said during Yali's time they managed to attract many investors to Uganda.

He also said they had established relationship in education and some Ugandans had been sponsored by Chinese government to study in China. "We would like to thank Yali for the cooperation and please keep up and keep in touch. You are our brother and you will continue being our brother," Mugarura said.

Reeling off several names of ministers present and deputy Chief of Defence Forces, Gen Charles Angina, Yali, who was the chief guest, thanked Ugandan government and the people of Uganda for their valuable support and assistance that enabled him accomplish his mission in Uganda.

He said he had enjoyed close working relationship and a personal friendship with President Museveni, Ssekandi and other Ugandans.

Yali, who said he would leave by the end of this month, noted that the China and Uganda mutual beneficial cooperation had yielded good results.

"Mutual political trust between our two countries has been strengthened and the frequent exchange of high level visits has been witnessed.

He said economic and trade relations between the two countries had been expanded and that from January 2012 to June 2016 Chinese companies had invested 253 projects in Uganda and created 45, 000 job opportunities.

He said when he goes back to China he would continue to follow the development of Uganda and make personal effort as a retired ambassador in pushing forward China-Uganda traditional friendship and cooperation.

"I accepted to be a goodwill ambassador of Uganda in China. In China I will be a promoter, a sell man of Uganda. Wherever I will go I tell a story about Africa and Uganda. I will tell them that Uganda is one of the best destinations for investment," he vowed.

He said the time had come for him and his wife to leave Uganda he described as beautiful.
"The time has come for me and my wife to say goodbye to Uganda and to say goodbye to all the friends present tonight. My wife and I will miss you. We will miss Uganda. Long live the relationship between China and Uganda. Omukwano gwa China ne Uganda guwangaale. God bless you, God bless Uganda," he said.

He then also presented a gift to Ssekandi.

Reactions: Should you go with your man to the salon?