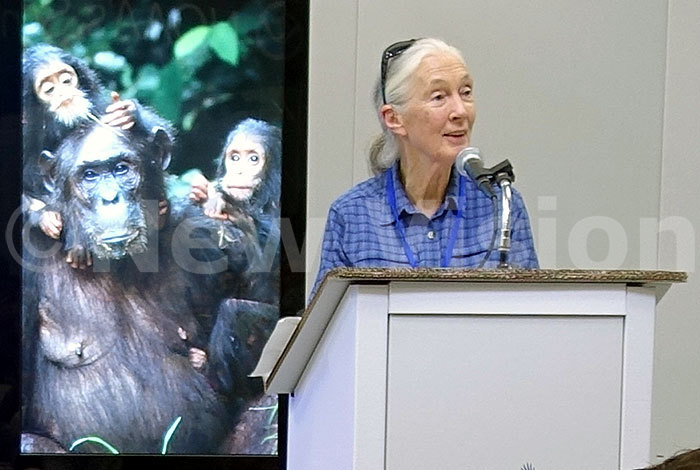 PIC: Primatologist Jane Goodall speaks at a session of the International Union for Conservation of Nature World Conservation Congress in Honolulu, Hawaii. (AFP)

Best known for rolling with chimpanzees in the African wild and revealing the apes' true nature as never before, Jane Goodall is now embracing modern technology in her mission to save the planet.

And at 82, the British primatologist said she has more energy than ever, particularly due to her work with young people around the world.

"I do have hope for the future, even though I think I have seen as much as anybody of the harm that we are inflicting on this planet," Goodall told attendees at the International Union for Conservation of Nature's World Conservation Congress in Honolulu.

"We are coming up with new technology all the time that will enable us to get in greater harmony with nature."

She was the first researcher to give names -- rather than numbers -- to the apes, and was the first to observe them using tools, a capacity that was until then thought to belong only to humans.

The initiative, led by her co-worker Lilian Pintea, has allowed people living in Gombe National Park in Tanzania to see high-resolution digital maps of their forests from above for the first time.

Seeing how these landscapes have changed since the 1970s, with trees dwindling and important chimp habitat lost, has encouraged them to protect their forests, better manage their own resources and replant trees, he said.

"The reason why this change happened was because we merged and integrated this perspective from above with the local understanding about the nature of the ecology in the right context at the community level," Pintea said.

Goodall herself said she is not involved with technical details -- that is all handled by Pintea, an expert in mapping tools who previously worked at the World Bank.

But she said she is in awe of the power of US space agency technology to make connections with the most primitive cultures.

"I find this a very fascinating juxtaposition of ideas," she said. 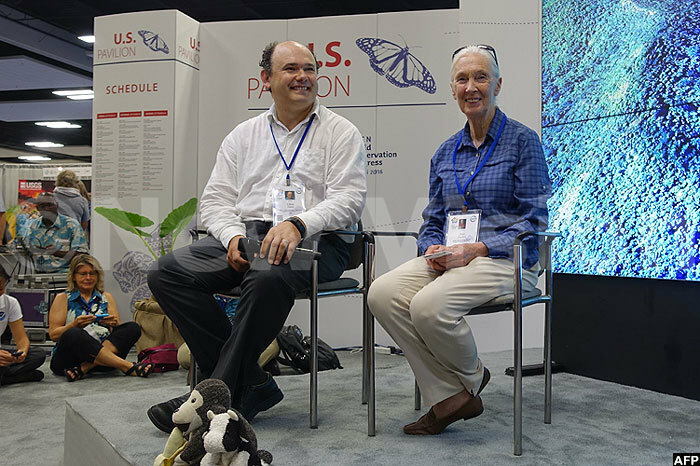 Goodall and Lilian Pintea, vice president of conservation science at the Jane Goodall Institute, prepare to speak at a session about mapping technology and chimpanzee forest restoration at the International Union for Conservation of Nature World Conservation Congress in Honolulu, Hawaii

Goodall said she travels 300 days of the year, and is inspired by meeting young people, particularly through a program she began in 1991 with a dozen students in Tanzania.

Called Roots and Shoots, the program encourages kids to come up with ideas to help people, animals and the environment, and is now a major movement in nearly 100 countries.

She also touted the power of social media to connect people around environmental causes.

"Social media used in the right way can bring together people around the world in unprecedented numbers," she said.

Goodall spoke at several sessions during the IUCN World Conservation Congress this weekend, opening at least one of them by stepping to the microphone and mimicking the greeting call of a wild chimpanzee.

The packed room cheered and applauded in response, and a few women wiped away tears. 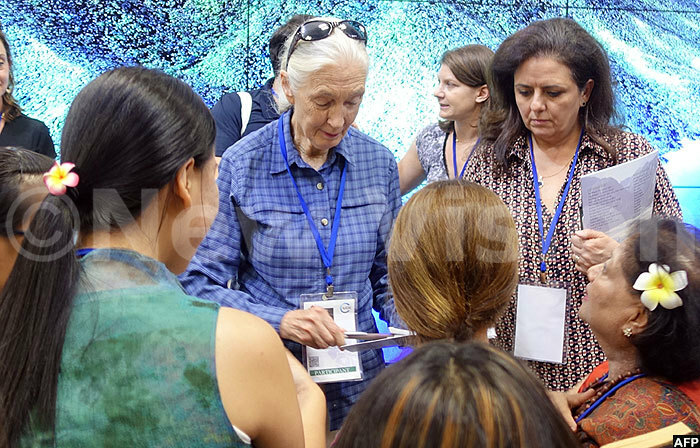 She is also featured in a new movie about the perils of climate change, called "Time to Choose," written and directed by Academy Award winner Charles Ferguson.

"You can see how far Jane has come out of her comfort zone," said the film's executive director Jeff Horowitz, remarking on Goodall's move from the wilderness to the forefront of modern technology.

Goodall "is generally known to strike up a conversation with everyone around her," he added.

"Jane's calling in her life is to help people understand what is important about our home."

Seated next to Horowitz as he introduced a screening of the film, Goodall, who is a vegetarian, urged people to eat sustainably and consider how much damage meat-eating incurs on the planet.

She also weighed in on the US presidential race.

As Horowitz spoke about his belief that most Americans understand that climate change is a real problem, Goodall interjected, "Trump doesn't."

"Trump doesn't," she repeated, drawing more cheers from the crowd.

Soon, she opened the floor to questions. Someone asked if she ever found it difficult to face the enormous task at hand.

"I'm finding it easier to get more passionate," she answered.

"I speak from the point of view of being 82. Each year I live, I am closer to the end," Goodall added.

"There is such a lot to do. I'm absolutely galvanized to use my remaining time."