The woman the world came to know as Mother Teresa of Calcutta was called a lot of things in her lifetime.

She was the "Saint of the Gutters" and an "Angel of Mercy." But also a "religious imperialist" and, in the words of British author Christopher Hitchens, "a fanatic, a fundamentalist and a fraud."

For all the eloquence of her critics, she was always far more revered than reviled.

On her death in 1997, Britain's Queen Elizabeth II predicted Teresa would "continue to live on in the hearts of all those who have been touched by her selfless love."

Since then however it has become apparent that the private Teresa was a more complex personality. The austere persona she displayed to the world with her gaunt, masculine face, masked a lighter, albeit troubled, soul.

For long periods, she was plagued by doubts about the faith that drove her mission to provide comfort to the dying.

"There is so much contradiction in my soul," she wrote to the Bishop of Calcutta in a posthumously published letter dating from 1957. "Heaven means nothing to me, it looks like an empty place." 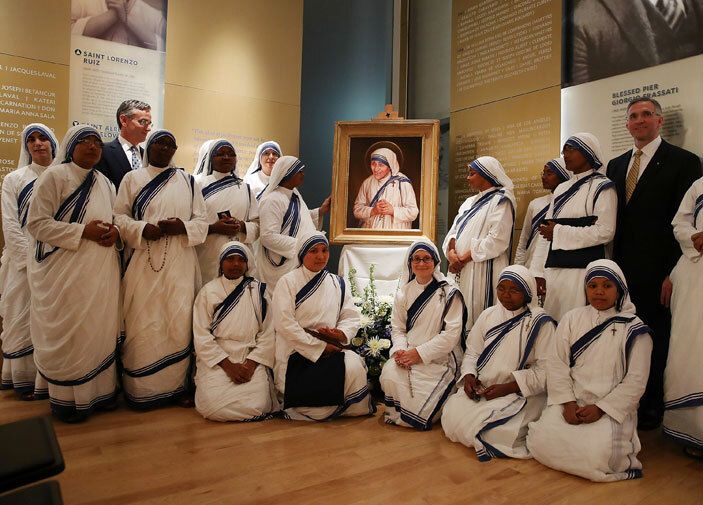 Sisters of the Missionaries of Charity, gather in front of the official canonization portrait of Mother Teresa, along with artist Chas Fagan (L), during a portrait unveiling ceremony at The Saint John Paul II National Shrine, September 1, 2016 in Washington, DC. Mark Wilson/Getty Images/AFP

Two years later, she wrote to a priest friend saying: "If I ever become a saint, I will surely be one of darkness; I will continually be absent from heaven -— to light the light of those in darkness on earth."

As of Sunday, the saintly tag becomes official thanks to a fast-track canonisation process that reaches its conclusion on the eve of the 19th anniversary of her death in what is now Kolkata.

Baptised Agnes Gonxha Bojaxhiu, Teresa was born into a Kosovar Albanian family in 1910 in Skopje, then part of the Ottoman empire and now the capital of Macedonia.

Her father, a businessman who was involved in the region's byzantine politics, died when she was eight.

By the time she was 12, according to biographers, Agnes was already a regular visitor to Catholic shrines and knew that she wanted to dedicate her life to missionary work.

At 18 she enrolled in an Irish order, the Sisters of Loreto, spending a brief period in Ireland learning English before her departure for India in 1929.

There she spent two decades teaching geography to the children of well-to-do families before founding her own order in 1950.

In 1979, her work in the Calcutta slums was rewarded with the Nobel peace prize. In her acceptance speech she made a fervent defence of her approach to helping the poor, which was by then coming under increasing critical scrutiny.

To those who said birth control was vital to combatting poverty, she replied that abortion was "direct murder by the mother."

To those who said her Order should promote development, she replied that she was a missionary, not a social worker.

"We may be doing social work in the eyes of the people, but we are really contemplatives in the heart of the world," she said. "For we are touching the Body of Christ 24 hours."

Teresa could come across as an ascetic figure and as a strict task-mistress to those under her. "She spoke her mind," Pope Francis recalled in 2014. "I would have been a little bit scared had she been my Mother Superior."

Those who knew her best however paint a different picture of the chocolate and ice cream-loving nun.

Father Brian Kolodiejchuk, a member of her Order who promoted her sainthood cause within the Vatican, recalls a maternal, easily-amused character who could sometimes be found bent over in laughter while discussing the day's events with fellow nuns.

"You felt that she was a mother," he said. "She was not very good at telling jokes but she had a sense of humour and could really find the funny aspects in ... daily life."