“I want to make an appeal to your leaders [South Sudan] to behave responsibly and stop punishing innocent civilians."

“I want to make an appeal to your leaders [South Sudan] to behave responsibly and stop punishing innocent civilians."

ADJUMANI - Draped in a South Sudanese traditional cloth, United Nations High Commissioner for Refugees (UNHCR) boss Filippo Grandi stood under the dazzling sun's heat at Pagirinya refugee settlement in Adjumani district on Monday afternoon and issued a clarion call to politicians in the troubled world's youngest nation to give peace a chance.

Speaking at a refugee settlement located less than 50km away from the South Sudan-Uganda border, Grandi, who is in Uganda to see for himself the humanitarian crisis created by a civil conflict in South Sudan, said the political leaders in Juba should behave "responsibly" and stop ignoring the plight of innocent civilians displaced to Uganda.

"I want to make an appeal to your leaders [South Sudan] from here [at Pagirinya] to behave responsibly and stop punishing innocent civilians. I hope you can go back when peace returns," he said. 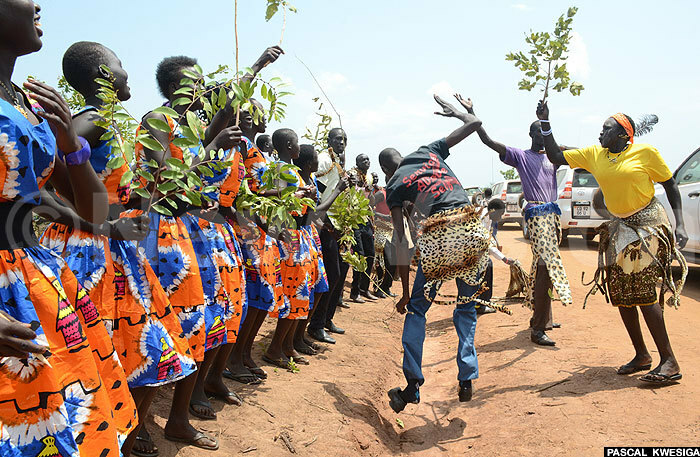 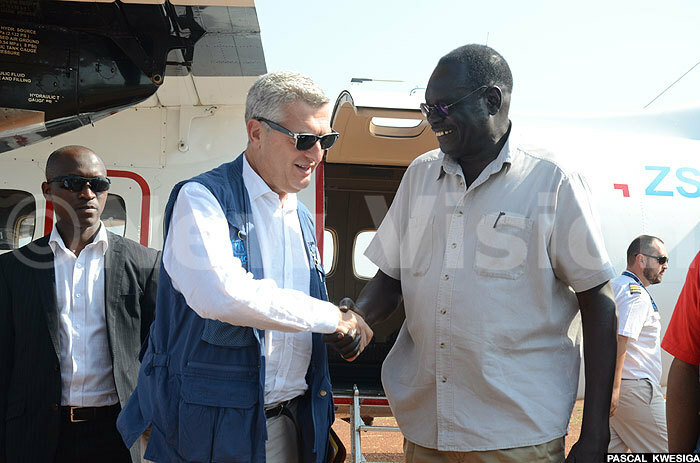 According to information from UNHCR in Kampala, over 100,000 refugees from South Sudan have fled to Uganda since July 8 when two government armies - one taking instructions from the country's former first vice president Dr. Riek Machar, and the other under the command of president Salva Kiir - fought fresh fierce battles again.

The clashes between the two armies that were supposed to be integrated under the August 2015 comprehensive peace agreement erupted just a month before the anniversary of the pact that was thought to have ended two years of fierce fighting that broke out in December 2013.

Currently, the number of South Sudan refugees in Uganda today, including the ones who started fleeing in July and those that fled the December 2013 fighting, is over 220,000. 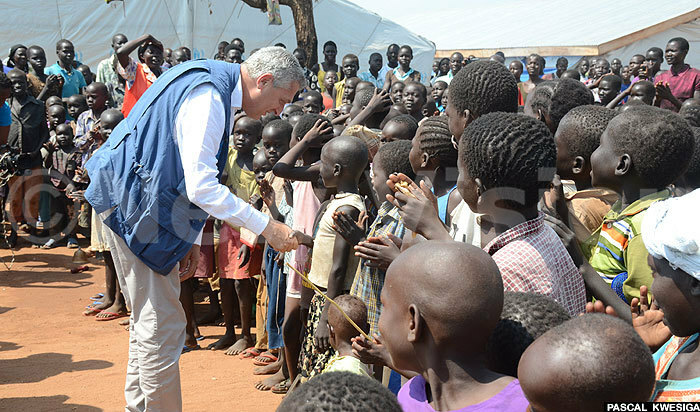 "I want you [refugees] to give Uganda a big applause for taking in people from destroyed countries. Uganda is a unique positive example of generosity in the while world. I have never seen anywhere in the world people getting settled with land allocated to them in just two months," said Grandi.

Unlike other refugee hosting countries that run camp systems that restrict refugees to camps without land for agriculture, Uganda has a settlement system that offers refugees land to establish a house and for cultivation. In Uganda, refugees are free to move across the country, establish businesses and get similar services received by Ugandans.

The UNHCR boss, who had earlier listened to horrific stories from some refugees at Nyumanzi refugee transit centre, was taken aback by the fact that Uganda has received between 800 and 1,000 refugees from South Sudan daily in the last two months and it continues to welcome more.

"I have heard stories of rape, murder and abduction. What should not be ignored is Uganda's generosity. It is in the middle of an unstable region and being stable, it is compelled to accept refugees."

Grandi said the number of refugees Uganda has been receiving daily in the past two months has potential to bring down a government.

"In Europe, these numbers could bring down a government. I really want to thank President Yoweri Museveni and his government. Uganda needs all the support from the international community and donor community." Uganda is currently hosting over half a million refugees, with the biggest number coming from South Sudan (69%) and DRC (17%). The number is expected to grow to over 600,000 refugees by the end of the year.

The visiting UNHCR boss urged the donors and international community to commit more financial resources to the refugee crisis in Africa and desist from focusing only on crises in other continents that affects them (donors) most.

"We need resources for emergency response and long-term programmes for refugees. About 65% of the budget to refugee crises is devoted to other areas and only about 20% to 30% in this region. Uganda needs all our support," Grandi added.

Despite limited funding that has compelled the authorities to reduce food rations to refugees, he said, the immigrants are better off in Uganda than anywhere in the world.

Meanwhile, the UN resident coordinator, Rosa Malango, said Uganda is one of the most generous countries in the world. She expressed optimism that a regional protection force as approved by the UN Security Council will be deployed in South Sudan to reinforce the UN mission in peace-keeping operations. The South Sudan conflict that has been fought along tribal lines has ruined the five years of its independence from Sudan in 2011.

The minister for refugee for relief, disaster preparedness and refugees, Hilary Onek, said Uganda cannot close its borders to people escaping conflicts in their homes countries, but cautioned refugees against breaking Uganda's laws. 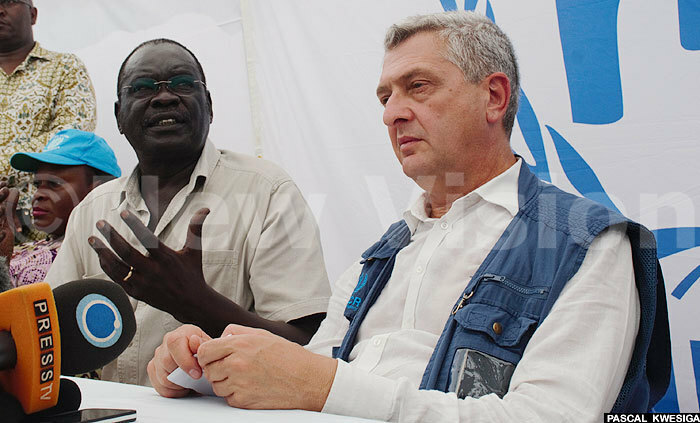 "There is a rule of law in Uganda and we have jailed some refugees for raping girls. Here, we do not tolerate that. That is why we are peaceful despite our diversity," he said. "But our prisons serve as transformative and corrective centres."

Uganda, he explained, welcomes refugees because Ugandans were also hosted by some neighbouring countries during the Amin regime.

Onek said Uganda's approach to refugee settlement seeks to transform refugees so that they can contribute positively to the development of Uganda and their countries when they return home.

He cited the Rwandan president Paul Kagame as one of the former refugees in Uganda who has transformed his country despite having lived in exile for years.

How Uganda spends on refugees

The department of refugees in the Office of the Prime Minister receives about sh1b each financial year. The money is spent on salaries of staff and the department's operations. But Uganda also spends on refugees indirectly, among others, through providing security in settlements, roads, health and education services.

In a memorandum of understanding, the refugees called for special road construction equipment, better health and education services, food, recreational facilities, jobs, firewood and motorcycles for their leaders. 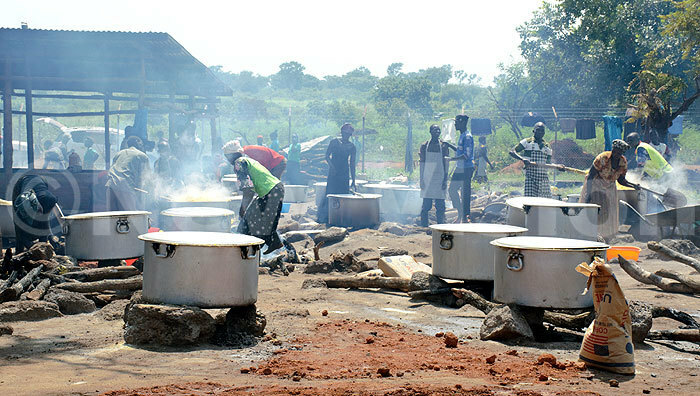 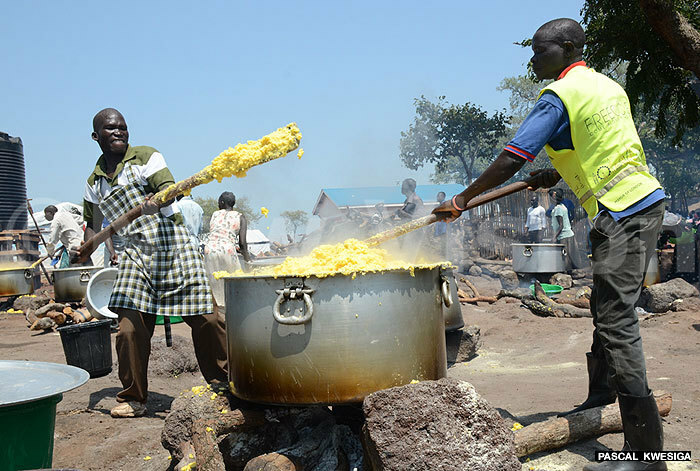 What other refugees say

Juspin Ekuye, 20: "We would like the UNHCR to provide us with better schools and hospitals. Some of us may not be able to go back to South Sudan because the war is not about to end. We need services that will enable us integrate faster."

George Omoro, 29: "We want schools, hospitals and a university as well as footballs. I do not think I will go back to South Sudan. I want to become a Ugandan because there is no difference between Uganda and South Sudan."

Florence Andrua, 30: "We want the UN and other stakeholders to do something for peace to return to South Sudan. It is better to go back home instead of going to Yumbe district. Let them do something to bring peace so that we return to our country."

Emma David, 16: "I was in Primary Eight in South Sudan, but I am now out of school. The earlier peace returns to our country the better because I would like to go back to school. We need better services in various areas. We also need to live in proper homes." 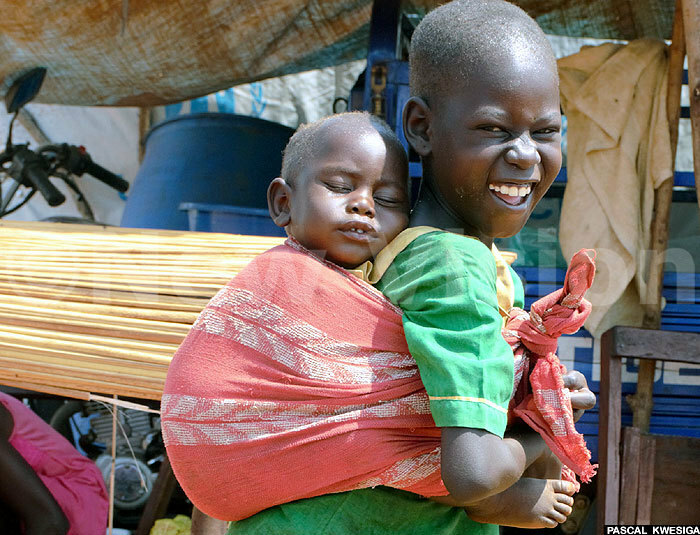 Annet Aniko, 8, carries a baby on her back at Nyumanzi

Jackie Jua, 17: "The living conditions are not good in the settlement. We are congested [at Nyumanzi] and we are being forced to go to Yumbe district. We want to go back to South Sudan but they cannot allow us to leave. We want to go back and die in our country now."

Florence Aciro, 30: "Food given to us is very little. I have just failed to get porridge because it is finished. That is the kind of life we are living. I wish the political situation in South Sudan can improve so that we go back before the conditions get worse here."

Candia Irene, 30: "I am contemplating going back to South Sudan soon because of the poor living condition. I am speaking to you on an empty stomach right now. There is little difference between Uganda and South Sudan."