Oulanyah calls for new measures to combat ...
Next Story

“We have evidence that these people are poachers who were looking for market to sell the ivory."

“We have evidence that these people are poachers who were looking for market to sell the ivory."

The Police are holding five people arrested last week in West Nile over illegal possession and selling of ivory from elephants that are regarded as endangered species.

According to Julius Odeke, the Media officer at the Natural Resources Conservation Network (NRCN), the suspects were arrested after undercover wildlife crime burst infiltrated the ivory ratchets.

Odeke named the suspects as Charles Limbake and Odesh Romano who are currently behind held at Nebbi Central Police Station. He also named Mande Adriga, Ferdinand Guma and Robert Eguma as the suspects who were arrested at Arua and appeared at Arua Court last week.

"We have evidence that these people are poachers who were looking for market to sell the ivory," said Odeke, adding that NRCN had intercepted them with the help of the Police.

Three of the poachers from Arua (pictured below), according to Odeke were charged at Arua Court on Monday last week. 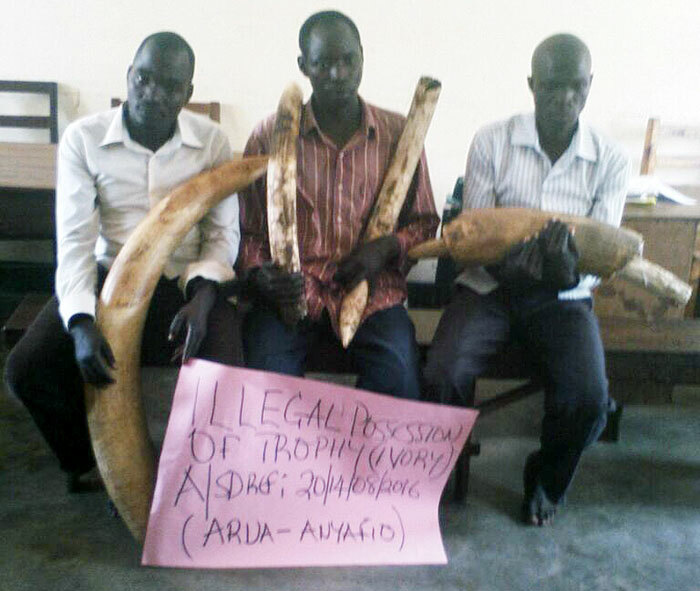 Odeke said the five people were in possession of trophies contrary to the Uganda Wildlife Act and international laws such as the Convention on International Trade in Endangered Species of wild flora and fauna (CITES).

Elephants are listed under Appendix 1 on the CITES list meaning that elephants will disappear if trade in ivory is not stopped and their destruction of their habitat does not controlled.

Uganda has about 5,000 elephants, according to recent census conducted by the Wildlife Conservation Society (WCS) and the Uganda Wildlife Authority (UWA). The census covered three of the largest reserves namely Queen Elizabeth National Park, Murchison Falls National Park and Kidepo Valley National Park where most elephants stay in Uganda.

Less than 2,000 people remained in Uganda after wanton poaching that prevailed in the 1970s and 1980s during the period of civil unrest and political turmoil.

Globally, the population of African elephants than half a million and this has rescued from 4-5 million which was the estimated population in the 1950s and 1960s, according to the Africa Wildlife Foundation (AWF).

Abiaz Rwamwiri, the Communications Officer at AWF said elephants are part of the global heritage that should be conserved for posterity. He also said elephants contribute more money to the economy through tourism than the poached ivory and that world is losing a priceless treasure.

The ivory extracted from the elephants is exported to Asia mainly China and Indonesia where rich people use tooth picks of ivory and stumps made out of ivory as status symbols. This instable demand for ivory coupled with the increasing wealth of the middle income class in China is pushing elephants to the brink of extinction.

Why abattoirs will be moved from Kampala