Over 800 turn up for free disability, reha...
Next Story

African leaders meeting in Nairobi, Kenya have agreed to use President Yoweri Museveni's paper on bottlenecks facing Africa's development as a blue print to guide the continent.

The decision was arrived at following Museveni's presentation at the African Peer Review Mechanism (APRM) meeting at the Intercontinental Hotel on Friday where he explained the 10 bottlenecks to Africa's growth and development. The meeting was chaired by host, President Uhuru Kenyatta.

The motion to adopt the paper and task the APRM secretariat to expand it into a blue-print for the continent was moved by South African President Jacob Zuma. The proposal was unanimously supported. Earlier, both Presidents Macky Sall of Senegal and Ellen Johnson Sirleaf (Liberia) had also spoken in support of the presentation.

Museveni told the meeting that he had arrived at the 10 bottlenecks after watching the development scene in Africa for 50 years.

"I have picked some ideas which are responsible for our lagging behind. The problem seems not to be addressing all issues in a comprehensive way," he said.

The first bottleneck, said the President, was ideological disorientation, which had fanned vices like tribalism and sectarianism.

"A lot of chaos in Africa is because of misidentification. We need to ask, is identity more important than interests? Ask, who buys what you produce, is it your tribes mate or religious mate?"

Using his own example as a cattle-keeper, President Museveni explained that people consuming his products like milk and beef were not his fellow cattle-keepers since they have similar products but other Ugandans and East Africans.

"Therefore misdefinition of what is important has been a problem," he said.

The second bottleneck, observed Museveni, is a weak state exemplified in a weak army, adding that it is a result of the first obstacle.

"When you want to build an army and you look for people from your tribe, you should ask, can a sectarian army command respect of a whole country? In such circumstances, when you get a small rebellion the army collapses. You then bring in the UN who are armed tourists." 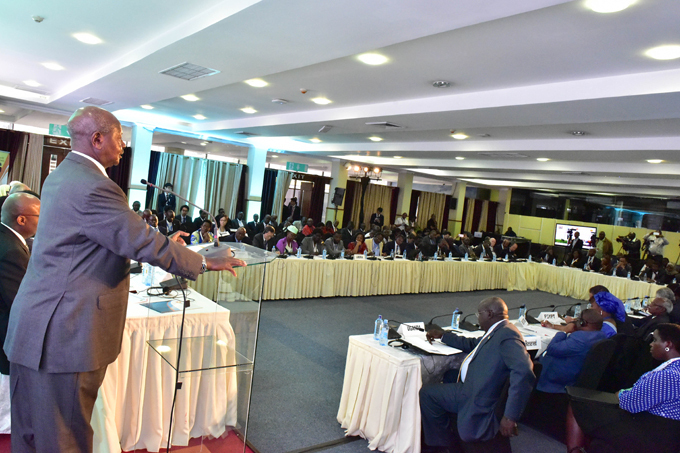 The President commended the international community for speaking about the third bottleneck; human resource underdevelopment. He, however, said the issue had been raised in isolation of the other bottlenecks.

"They do not care about dams, roads and the railway. As a consequence, only South Africa and Libya under Gaddafi had high electricity consumption. Importantly, poor infrastructure causes very high costs of doing business. You can't attract investments, how then do you eradicate poverty if people are not employed," he asked.

Because of poor infrastructure, the next bottleneck is failure to industrialize, the President said. This, he added, had forced Africa into exporting raw materials and ultimately donating a lot of revenue to the West. Citing the Ugandan example where a kilogram of unprocessed exported coffee goes for $1 while the processed coffee in the West fetches $14, President Museveni asserted that Africans were the real donors—and unfortunately were donating their jobs too.

The next bottleneck, according to the President, is fragmented markets, a product of colonialism.

"Colonialism cut Africa into small countries with small populations that are not developed enough to support production. Without a united market you can't attract investments."

He commended African leaders for trying to bridge this gap by creating regional blocs and integration hence a bigger market.

Using the Ugandan case, he said the country was producing 2.2 billion litres of milk but consuming only 800 million, while it was taking in only one million tonnes of maize out of the four million.

"These two industries would collapse if we had no East African Community because that is where we sell the surplus," he said, adding though that there were still forces fighting integration that must be dealt with decisively.

The seventh bottleneck is under-development of the services sector. Museveni said this was partly because Africa has suffered bad publicity through wars, poor infrastructure, among others, compelling professionals to shun the continent. This, he said, had affected tourism, education, health, the banking sector among others.

The laissez-faire attitude that is crippling the agriculture sector in Africa, creating another bottleneck, must be fought, the President told the meeting. He said in the Tropics, many farmers were getting on with the minimum basic of producing for consumption (subsistence) and not commercial purposes. Coupled with this is the increasing fragmentation of land, making the land share diminish with successive generations.

"Agriculture must be modernized. We must talk of income security not just food security. We should also agree with Egypt on the question of irrigation for other countries sharing the Nile."

The other obstacle, according to the President, is undermining the private sector, adding that it has been persecuted through policy like Idi Amin did with expulsion of Asians or through corruption. He noted that most Asian Tigers like Singapore, Malaysia and South Korea had developed through a private sector-led approach.

The last obstacle, Museveni noted, was democracy but added that most of Africa had addressed this and it was prevailing across the continent.