The TV women told to lose weight first
Next Story

The Catholic mission health facility is the only major hospital between Masaka and Kampala.

Old Kampala DPC, ASP Mohammed Kirumira (left) did some washing too, together with musician Bobi Wine and several other people. (Credit: Mathias Mazinga)

The Catholic mission health facility is the only major hospital between Masaka and Kampala.

The exercise was one of the activities to raise funds for the construction of an accident ward at the hospital.

Located at Nkozi, 82km on the Kampala-Masaka Road, the 74-year-old Catholic mission health facility is the only major hospital between Masaka and Kampala. It receives an average of 20 accident victims a week and hence the urgent need for an emergency ward. Catholic nuns got down to some car-washing during the fundraiser. (Credit: Mathias Mazinga)

In the same spirit, he also urged motorists to be mindful of their duty to safeguard the lives of their passengers and pedestrians as they dive.

Kirumira later pledged to donate sh2m on behalf of the Police. He also donated sh150,000 in cash.

Delivering his speech at the function, the Metropolitan Archbishop of Kampala, Dr. Cyprian Kizito Lwanga, who was the chief car-washer, asked government to fund the development projects of faith-based hospitals. Lwanga argued that the services that mission hospitals like Nkozi are giving are supposed to be provided by the government, which was why it was not fair to ignore the needs of the same hospitals.

"Imagine we are struggling to get sh500m. Government should give us this money. Is sh500m anything to government?"

The Church leader also asked drivers to be careful on the road. He amused people when he said that he was donning a white cassock to challenge Uganda's car-washers - to be clean when they are washing cars.

Dressing shabbily, Lwanga argued, damages the reputation and dignity of the car-washing business. 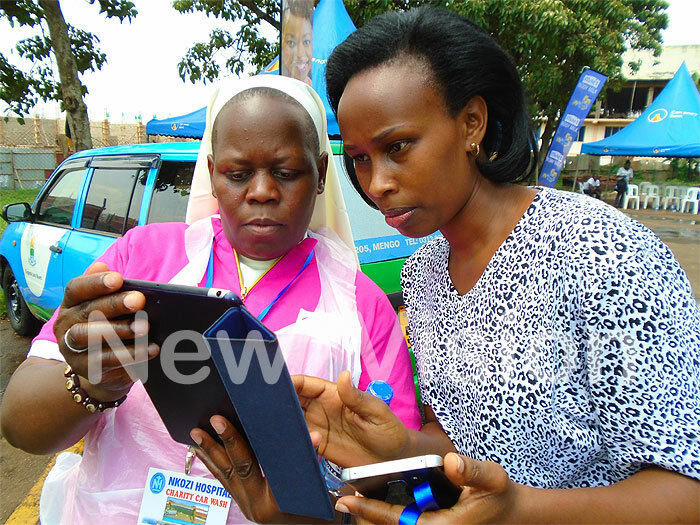 Bobi Wine appeared to be enjoying being a part of the noble cause. (Credit: Mathias Mazinga)

Standard Chartered Bank's chief executive and MD, Herman Kasekende, donated sh10m towards to cause. He also delivered sh10m from the Emmanuel Katongole, the CEO of Cipla Quality Chemical Industries.

Over sh650m is needed for Nkozi Hospital's Accident ward according to Sr. Teddy Nakyanzi, the administrator of the hospital.

200,000 jobs to be created from commercial tree planting