Malac pointed out that the use of open fires reduces economic and other opportunities for women and girls who usually bear the burden of collecting firewood.

The Ambassador of America Deborah Malac inspects a locally made cooking stove as Derrick Kiwana of Centre for Research in energy and energy conservation, Makerere University explains to her during the closing of a summit on cookstoves at Kulika Training Centre in Wakiso district. Photo by Francis Emorut

Malac pointed out that the use of open fires reduces economic and other opportunities for women and girls who usually bear the burden of collecting firewood.

Ugandans should embrace new clean cooking technologies in order to curb harmful cooking practices. The call was made by the ambassador of America, Deborah Malac who said exposure to cookstove smoke affects 97% of Ugandans, contributing to 13,000 premature deaths annually.

Malac pointed out that the use of open fires reduces economic and other opportunities for women and girls who usually bear the burden of collecting firewood. She noted that the adoption of new clean cooking technologies will go a long way in reducing the environmental impact of harmful cooking practices. 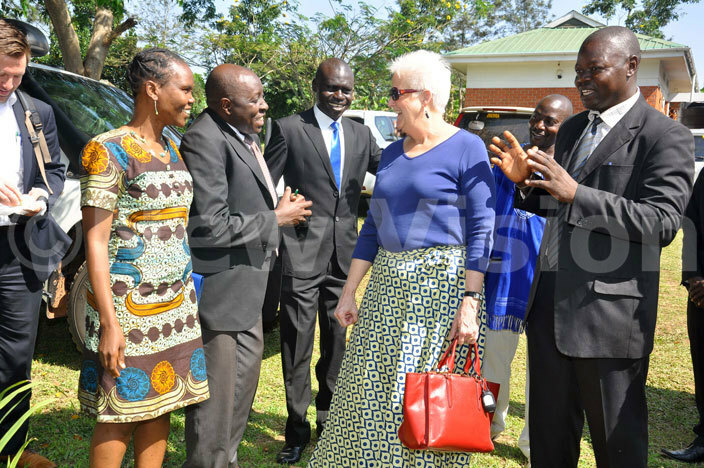 "Finding remedies to dangers and drawbacks of cookstoves is therefore, imperative to resolving the broader issues of Ugandan's economic development," Malac said.

The American envoy was speaking during the closing ceremony of design summit on cookstoves at Kulika Training Centre in Wakiso district on Friday.

The ambassador cited Karamoja region where USAID in partnership with Mercy Corps helped to train local entrepreneurs to make renewable energy briquettes and community leaders in Southwest Uganda who were trained in constructing energy-efficient stoves.

"These initiatives are not just important in improving the health of Ugandans and the environment of the country they are also beneficial to the broader East African Community," Malac said. The cookstoves summit which attracted participants from Uganda, Kenya and Rwanda was convened by International Development Design Summit (IDDS) in partnership with Global Alliance for Clean Cookstoves and Uganda National Alliance on Clean Cooking (UNACC).

Participants and residents of Wakiso were trained in designing new clean cooking technologies for better health of communities, increase household incomes and conservation of the environment.

In advocating for clean cooking technologies and innovations Malac reminded her audience how advances in computing, transport and energy technologies have transformed the world.

"We see how these technologies can spur economic growth and how they have the potential to lift millions of people from the depths of poverty," she said

"Our ultimate goal here is to provide Ugandans with the tools they need and the skills they want to create the healthy and prosperous society they deserve," she stated.

The mayor of Namayumba Town Council, Nelson Kasenene Kalyango agreed with the ambassador on adopting new clean cooking technologies saying it will help to avert premature deaths and conserve environment.

Kalyango pointed out that poor environment practices such as bush burning, felling of trees for charcoal, timber and firewood needs to be curbed.

"It's timely for all stakeholders to find viable ways of reducing hazardous cooking practices in order to conserve environment," Kalyango said.