Twins festival: I sold 20 cows, 15 goats to save my quadruplets

This Sunday, Sunday Vision will host the 3rd annual Kampala Twins Festival at Kyadondo Rugby Grounds. Gates open at 10:00 and you can get in for a minimal fee of sh10,000.

This Sunday, Sunday Vision will host the 3rd annual Kampala Twins Festival at Kyadondo Rugby Grounds. Gates open at 10:00 and you can get in for a minimal fee of sh10,000.

PIC: The excited children with their mother after receiving items. Photos/ Gladys Kalibbala

When we finally reached their compound carrying the package sent to them by New Vision readers, the quadruplets who were playing with friends came running towards us with wide smiles. The vehicle was parked over 500 metres away because of the thick bushes leading to their home.

A short while later, their parents George Rwakabishe and Joyce Muteteli residents of Kamuchope, Najjanankumbi village in Kyankwanzi district joined them. Indeed it would be rude to deny Muteteli her claim to her late young sister’s quadruplets after looking after them ever since they were born.

She calls them her children and she is the only mother they have ever known.
The parents thanked Vision Group for continuously publishing their plight. This has enabled readers to support them.

“We appreciate so much that Vision Group has not only stopped at publishing our stories, but they also offer transport to bring the items the readers offere,” Rwakabishe said.

He thanked Rhoda Kalema (former Kiboga Woman MP) who introduced them to Vision Group when their quadruplets were sickly and barely a year old.

“Kalema has supported us ever since they were babies, especially during the period they used to fall sick all the time,” he adds.

Two Good Samaritans; Lawrence Lugwana and Paul Kawooya, who last year gave this family mattresses, bed-sheets, blankets and towels for each quadruplets, this time sent them exercise books, slippers, clothes, a lamp, two basins, a blanket for their parents, two pairs of bedsheets, a carton of soap, sugar as well as a five-litre jerrycan of liquid soap. 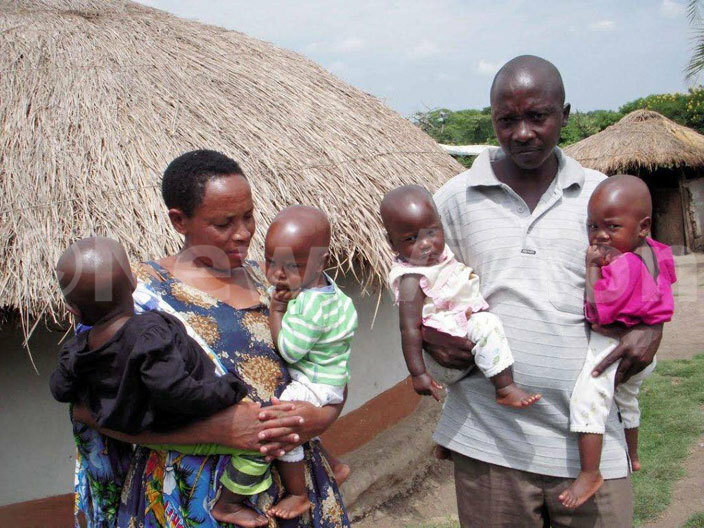 Their birth
In 2009, Rwakabishe (32 at the time) married Scovia Kateteyi 25, (biological mother of the quadruplets) and young sister of Joyce Muteteli (current wife).

Rwakabishe says when Kateteyi became pregnant a year after their marriage, she was sickly and spent most of the time in hospital.
“Her condition worsened in the seventh month with her feet becoming swollen. She could not sit or walk un-aided,” Muteteli says.

The family sought medical attention in Kampala. Rwakabishe rented two rooms for three months in Kamwokya to ensure Kateteyi gets proper care as he could not afford to keep her at hospital all the time.

Both Muteteli and Rwakabishe were by her side most of the time as Muteteli could not carry her alone. Because they did not have any other income and needed money for medical bills and upkeep, Rwakabishe sold all he had at home.

“Eventually, I ended up selling all the 20 cows and later the 15 goats we had in order to save her life and our children,” he says sadly.

Unfortunately, when she finally underwent a caesarean section in 2010 and delivered the quadruplets, her life remained fragile.

“She was in coma for over seven hours,” Muteteli says.
When they were finally discharged from hospital, Kateteyi only slept at their home for one night. She died the following day in the hands of Muteteli who was nursing her at about 6:00pm.
Kateteyi’s quadruplets (three girls and a boy) named Meron Kansiime, Anthony Ninsiima, Justine Kamusiime and Winnie Asiimwe (now six years) were left in the care of Muteteli. Kawooya (left) and Lugwana (right) donated items to the quadruplets

Raising the babies
Because Kateteyi was weak when they went back home, she had been taken directly to her parents’ home not far from Rwakabishe’s place. Muteteli, who had separated from her husband, took care of her little sister’s babies.

Rwakabishe says when the babies were about a year old, he was not comfortable when his family demanded he picks his children from the in-laws and distributes them among his family members.

“I could not look after them single-handedly, yet separating them tormented me. I was also afraid to marry another woman so fast fearing she may mistreat my children who were sickly most of the time,” he says.

While still in that dilemma, Rwakabishe says an idea he does not regret struck him.
He thought of marrying his sister-in-law, Muteteli, although he feared she may refuse because of the age difference between them.

“The babies had grown in her care and I could not think of any other person who could love them like her,” he says. Fortunately Muteteli accepted his proposal.
“My late sister’s children had automatically became mine. I realised I could not stand it if any woman came into this family and mistreated them. Since I am a Born-Again Christian, my condition was that we exchange marriage vows in church before I became his wife, which he did,” Muteteli says. 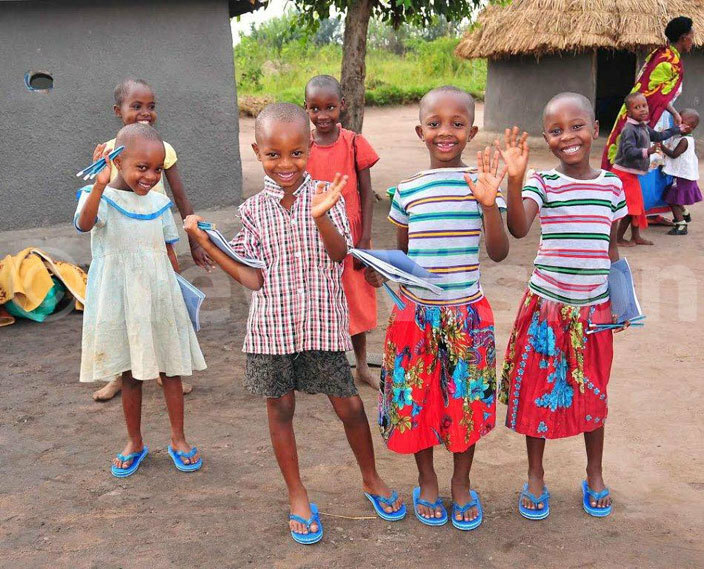 The excited children after receiving items

I broke 12 flasks by the time they turned one year
Many mothers will just push a breast into the mouth of a crying baby in the middle of the night.

For Muteteli, that was not an option. She says whenever one woke up and cried, the rest would follow suit. She cannot count the times she had to wake up during the night to feed the babies. In exhaustion, she says she knocked many flasks down.

“Until recently, ours has been a small hut where we had little space so I would always keep the flask near the bed. Whenever one of the babies cried at night, I would wake up hurriedly, forgetting there was a flask nearby. By the time they turned one year, over 12 flasks had been broken,” she says.

Muteteli says while two girls are shy, the third girl and boy are stubborn. Rwakabishe, who thanks all those who have contributed towards the upkeep of his children, further explains that if he could get a motorcycle, life would improve tremendously.

“At the moment, I do not have any income and since we live in a rural setting. A bodaboda can help generate money to support the family,” he says.

This year, he was able to buy 22 iron-sheets (using his own money) which he used to replace the grass-thatched roof.

To assist the family, email sunday@newvision.co.ug

You can also join the conversation on our twins facebook page: KAMPALA TWIN FESTIVAL

Twins festival: Born together, working together

Ugandans in the diaspora told to unite