Mother of five hacks husband to death
Next Story

He was attacked his father-in-law wielding a hoe handle

He was attacked his father-in-law wielding a hoe handle

A bodaboda rider of Karuma Town Board, Kiryandongo district is nursing injuries after he was attacked and seriously injured by his father-in-law for failing to pay sh500,000 for marrying his daughter. 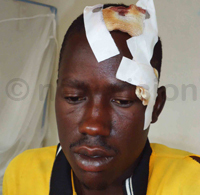 Moses Odoc a resident of Karuma in Mutunda Sub County was reported to have been attack and hit several times on the head by Nixson Okullu his father-in-law wielding a hoe handle.

Okullu accused Odoc of dodging payment of the dowry many times which led to his wife later leaving him.

When contacted, the officer-in-charge of the outpost however decline to comment, referring New Vision to the DPC.

However a police officer at the outpost speaking on condition of anonymity said Okullu was released on bond since he is a headteacher of Comboni Primary School and needed to be at school ahead of pupils' exams.

Is Unplugged losing its shine?