MENU
Olympics: Brazilians ask 'Where are the medals?'
Previous Story

Trump lashes out at 'crooked media'

"My rallies are not covered properly by the media. They never discuss the real message (...)," says the Republican presidential candidate.

"My rallies are not covered properly by the media. They never discuss the real message (...)," says the Republican presidential candidate.

Donald Trump, clearly angered by news reports that he has grown depressed and sullen over his fading presidential prospects, has issued some of his sharpest attacks on the media.

"I am not running against Crooked Hillary Clinton," the Republican presidential candidate said in a speech late Saturday in Fairfield, Connecticut. "I'm running against the crooked media."

Trump seemed particularly upset with a New York Times article that quotes unnamed associates of his as saying that in private "his mood is often sullen and erratic." Republicans close to his campaign were quoted as saying he was "exhausted, frustrated and still bewildered" by the political process.

The real estate tycoon returned to his message on Sunday, tweeting: "My rallies are not covered properly by the media. They never discuss the real message and never show crowd size or enthusiasm."

Later, amid a flurry of further tweets on the subject, he added: "It is not 'freedom of the press' when newspapers and others are allowed to say and write whatever they want even if it is completely false!"

Trump has complained for months about media coverage. He has stripped a long list of news organizations -- including the New York Times, BuzzFeed, Politico and The Washington Post -- of their credentials, and vowed that as president he would make it easier to sue news outlets.

"Trump is right that most of the media want him to lose," wrote The Wall Street Journal editorial board Sunday, noting that is "true of every Republican presidential nominee. The difference is that Mr Trump has made it so easy for the media and his opponents." The national news outlet recommended the Republican party "write off the nominee as hopeless" if Trump fails to act more presidential by Labor Day, in which case it said Trump should "turn the nomination over to Mike Pence," the Republican candidate's running mate.

Despite Trump's complaints media monitors say he has received more extensive coverage than any candidate in years.

A prominent American journalist, James Fallows of The Atlantic magazine, suggested Trump's very criticism reflected a degree of desperation, tweeting on Sunday: "I've seen winning campaigns and losing ones. 100% Iron Law: campaign saying 'our problem is the media' is campaign on way down."

But Paul Manafort, the Trump campaign chairman, pushed back against that notion during an appearance Sunday on CNN, saying, "The campaign is moving forward and very strong. We raised over $132 million in the last two months."

He noted that Trump had visited key battleground states such as Pennsylvania, Ohio and Florida repeatedly and was "starting to get traction in those states."

However, recent polls have shown Trump's numbers sagging badly in those battleground states, notably hurt by his critical comments about the Muslim parents of a fallen US soldier, and what some saw as his suggestion that "Second Amendment people" -- gun lovers -- take their dislike for Clinton into their own hands.

Manafort repeated the Trump claim that his Second Amendment remark was meant purely as an exhortation to vote. 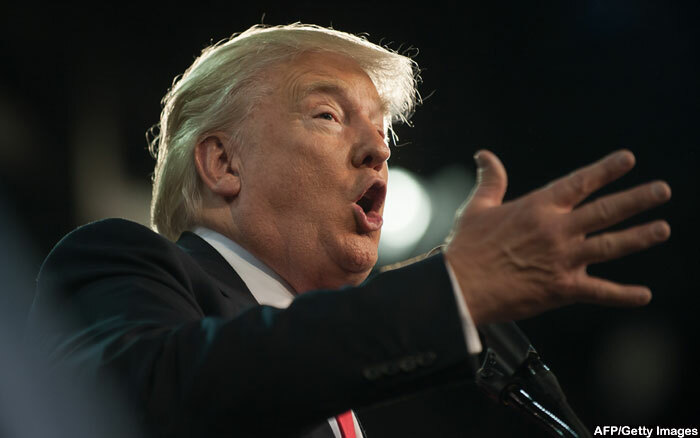 But even one of Trump's top advisers, Senator Jeff Sessions of Alabama, conceded Sunday that the candidate needed to communicate "more effectively."

"He's got to wrestle in his own heart, how does he communicate who he is, what he believes, the change he thinks he can bring to America," he said on ABC.

"He does need to communicate -- and I think he can -- more effectively."

The CNN interviewer also asked Manafort about mounting pressure on Trump to release his tax returns after Clinton released hers on Friday.

The channel broadcast video of Trump urging Mitt Romney, the Republican candidate in 2012, to release his returns at the time, saying, "If you didn't see the tax returns, you would think there is almost, like, something wrong."

Manafort repeated Trump's explanation that he is under audit by the Internal Revenue Service.

"When that's completed, he'll release the returns," Manafort said, adding that Clinton's returns showed income coming from "people who benefited from her State Department term as well," referring to her time as secretary of State.

"I haven't seen stories on that yet."

FUBA playoff degenerates into a brawl!