UPDF officer arrested over theft of singer...
Next Story

The unidentified driver was reportedly initially besieged by a group of youth as he tried to flee.

The unidentified driver was reportedly initially besieged by a group of youth as he tried to flee.

PIC: The scene of the freak accident that claimed the lives of five people in the outskirts of Kampala. (Credit: Eddie Ssejjoba)

KAMPALA - The police are still hunting for a driver of a milk-transporting truck that rammed into a crowd in a busy roadside market in Kagoma, along the Kampala-Bombo Highway, killing three people on the spot.

Two other people died on the way to hospital.

The accident occurred when the driver of the milk tanker lost control and rammed into a crowd in an evening market.

Witnesses said the unidentified driver who was transporting milk to Kampala city Wednesday late evening was besieged by a group of youth as he tried to flee the scene but he allegedly surrendered his wallet that had money and was let free.

By the time police arrived, he had long gone into hiding. The milk truck hit this electric pole as well, dangerously lighting the late evening night with sparks amid the pandemonium. (Credit: Eddie Ssejjoba) 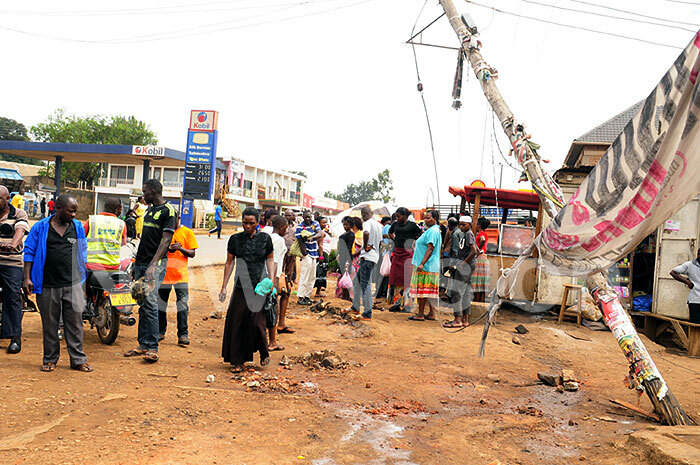 Witnesses say the driver had first dropped off a traveller at a filling station metres away. (Credit: Eddie Ssejoba)

The officer in charge of traffic at Kawempe Police Station, Daniel Chemonges, identified one of the dead as Salim Kibuule, who had parked on the roadside.

He had left his wife and children inside the car and had gone to buy potato chips at one of the stalls but the "flying" truck hit him as he paid for the items, killing him instantly.

Others who died in the accident include a taxi driver , Ssalongo Gerald Nsamba alias Bigambo, Justus Niwamanya, one only identified as Henry and a male adult who had not been identified yet.

Hadija Nakarangwa who roasts gonja (plantain) was critically injured and was still receiving treatment at Old Mulago Hospital by the time of writing this.

Residents said the place is always busy in the evening with many vendors cooking and frying snacks. They also serve food to customers who sit on benches in the open and under umbrellas but all scampered for safety when they saw the milk truck bulldoze into the market. It hit an electric pole and scattered all the tables and fire stoves and food. This boda boda rider saw the milk truck crash into the unwitting crowd who were going about their business. "People scampered for safety," he said. (Credit: Eddie Ssejjoba) It was costly crash for many of the local business people, including the owners of these boda bodas. (Credit: Eddie Ssejjoba) Robert Kibuli, a Mobile Money vendor, said he saw the truck coming and dived away. He soon afterwards heard a big bang and electric sparks after the truck hit a pole. He said he saw injured people crying for help but everyone was scared and first took cover.

Julius Ssempijja, who makes chapattis, said he had just sold four to a customer who was hit by the truck, but he survived when he saw the vehicle coming and jumped away. His customer was killed.

Sumayiya Babirye, who makes potatoes chips, said she sustained injuries as she fled the scene. She was standing behind her charcoal stove when suddenly everyone started shouting for help.

Another witness, Shakira Nankya, said she was crossing the road when the truck hit everything in place. She sustained a few bruises. Another person who was at the scene, Muhammad Kitara, said he collapsed and was only pulled from the scene moments later. FROM LEFT: Sumaya Babirye was making potato chips at the time. Robert Kibuli escaped but his shop was rammed into. kitara Muhammed witnessed the freak accident and is now asking government to build humps on the road. (Credit: Eddie Ssejjoba)

Lawrence Zziwa said that moments before the deadly crash, the truck driver had dropped a passenger at a gas-filling station and was driving towards Kampala when he lost control.

Meanwhile, another accident occurred hours later, at about 3.00am on Thursday morning, when an Isuzu car carrying sand from Bombo Road hit a stationary Tata Lorry at Maganjo, two kilometers from the second scene of the earlier accident.

Three occupants in the Isuzu truck died, including the driver, Ibrahim Kasajja. Their bodies were taken to Mulago hospital, with two still unidentified.

Police's Chemonges said that in another accident at Kawanda, a man identified only as Hajji Musa was hit by a speeding commuter taxi as he crossed the road going for prayers at a nearby Mosque.

He died instantly. The driver, Robert Mutabule was rushed to Mulago Hospital in critical condition. 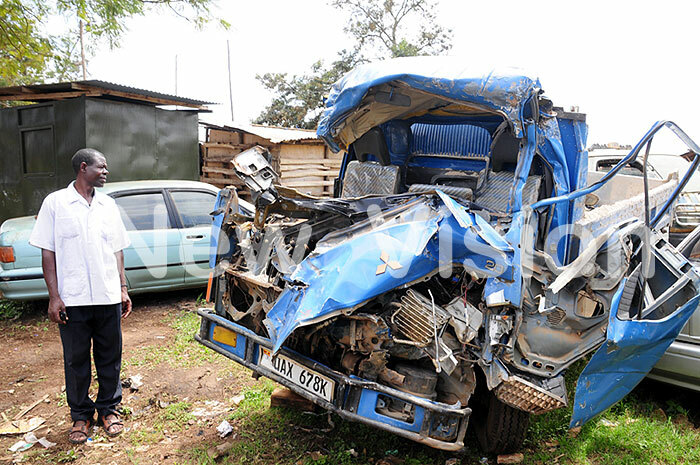 Chemonges warned motorists against driving at high speed in busy trading centers, saying the recommended maximum speed at such busy spots is 30km/hr. He however said many motorists drive beyond 80km/hr and end up failing to control their vehicles, causing accidents.

Residents at Kagoma appealed to authorities to remove the roadside market, which they said attracts crowds, moreover on busy highways. They are requesting for construction of humps in the area to compel drivers to reduce speed.

What you may have missed at Namugongo