AG's office wants fund to help with menstr...
Next Story

The Kyamadidi Vs Ngabirano ruling had pulled hundreds of supporters.

The turnout was huge, with majority of the people being supporters of Vincent Mujuni Kyamadidi. (Credit: Aloysius Byamukama)

The Kyamadidi Vs Ngabirano ruling had pulled hundreds of supporters.

The Mbarara High Court adjourned judgment of two election petitions and the hearing of another on Thursday amid tight police deployment at the court premises in Mbarara Municipality.

The court was to deliver its final verdict on an election petition petition filed by former Rwampara MP Vincent Mujuni Kyamadidi against Charles Ngabirano and Mbarara electoral commission.

Another ruling was for a petition by Moses Beinemigisha who lost the Kiruhura District LCV seat to incumbent Rev Samuel Katugunda.

At the same time, the court was to resume the hearing of the election petition filed by former Igara East MP Michael Mawanda Maranga against Andrew Martial and Bushenyi electoral commission.

All the three were under Justice Winfred Nabisinde.

The Kyamadidi Vs Ngabirano ruling had pulled hundreds of supporters who by 7.30am local time had gathered outside the court premises ready to enter and hear the judgment. 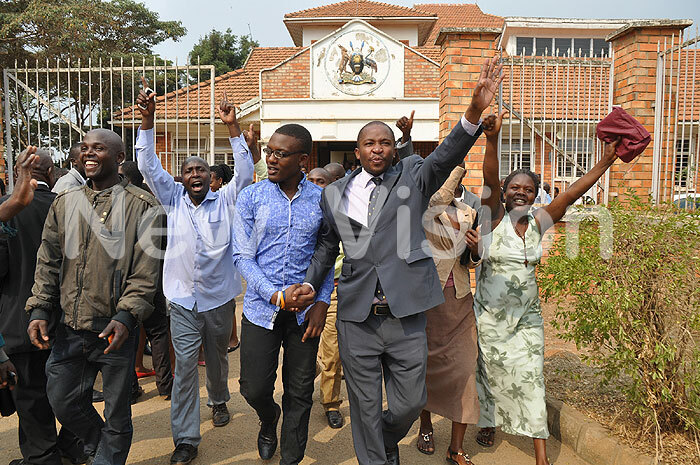 Kyamadidi, wearing a grey suit, emerged out of the court accompanied by scores of his supporters. (Credit: Aloysius Byamukama) 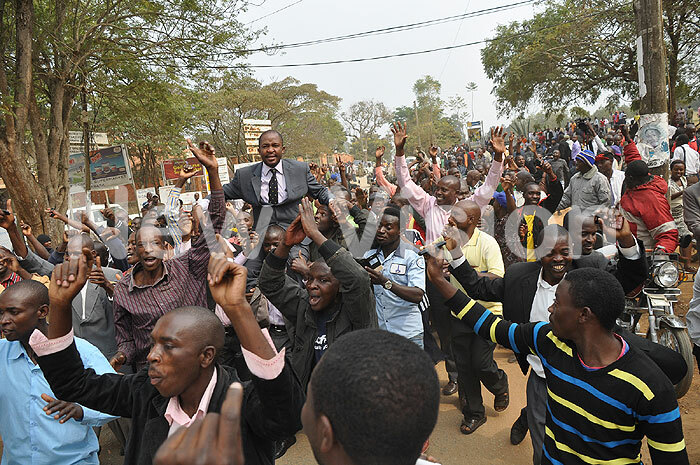 Although the final ruling was delayed, Kyamadidi's supoorters did not stop short of cheering him and singing songs. (Credit: Aloysius Byamukama) 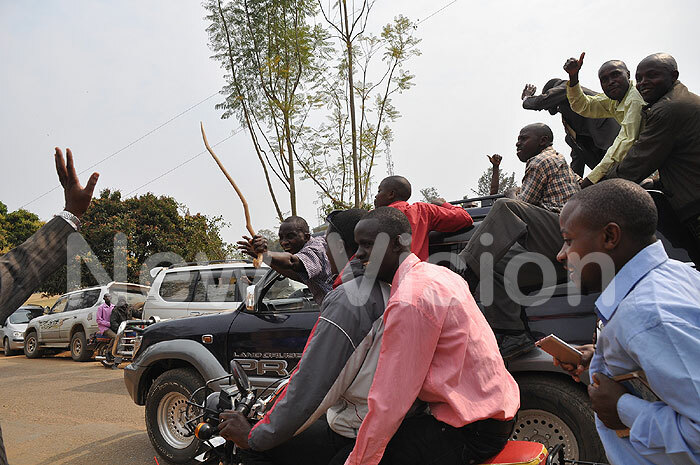 Police at the court gate had to battle with the supporters who were vigorously trying to force their way into the courtroom, but still, those who had entered the court room also had to be pushed out.

But after an hour of anxious waiting inside the courtroom, the few supporters and counsel of all the parties saw Magistrate Grade One Emanuel Niyokwizera emerge from the chambers, take the judge's seat and announce the adjournment.

"We apologize for the delay but the judge is indisposed. She is a visiting judge and she could not make it here, so this session is adjourned," Niyokwizera told the court.

Kyamadidi's lawyer Ngaruye Ruhindi said he was disappointed and that they had wasted their time and money getting to the court.

Both cases' judgment day has been adjourned until August 17 while the continued hearing of the petition by Michael Mawanda resumes on August 19, 2016.