Expelled Ugandans to be resettled in Kyegegwa
Next Story

Why breastfeeding is the best

Breast is best; it is safe, clean, healthy, sufficient, on time and cost effective. It is baby's first vaccine, boosts Intelligence Quotient, and increases their chance of celebrating their fifth birthday to mention but a few benefits.

For mothers, breastfeeding prevents breast and ovarian cancers, reduces the risk of diabetes, and improves birth spacing. Breastfeeding also stimulates release of the hormone oxytocin, which produces contractions that help the uterus return to its pre-pregnancy size.

But times have changed and so have mothers who want the best for their babies. So, some are choosing to give them less than the breast. Globally, only 37% of infants younger than six months of age in low and middle-income countries are exclusively breastfed for at least six months. In the high income countries, even fewer babies breastfeed.

In Uganda, it is 37% of mothers who do not breastfeed exclusively for six months and most of these are in urban areas.

There are many reasons as to why mothers fail to breastfeed.
A series of articles published early this year in the Lancet, a respected medical journal, highlighted women's work as a major obstacle to optimal breastfeeding. For working women, exclusive breastfeeding may not only be impractical, it is also exhausting.

Dr Alicia Dermer, an American clinical Associate professor in a 2001 article stated that on average, breastfeeding mothers use 200 to 500 calories per day to produce milk. "To use up this many calories, a bottle-feeding mother would have to swim at least 30 laps in a pool or bicycle uphill for an hour daily," she writes.

Pross, a relations officer with a microfinance institution was one such mother. With an 8 to 5 job, it had to take sheer determination to exclusively breastfeed for six months at a time when statutory maternity leave in Uganda was only 45 days.

She invested in a breast pump and cooling bag. At the time it cost sh250,000 (then about 125USD). She would excuse herself from the office at break time, lunch time and at 3:00pm to relieve her full bust in the corner of the office kitchen. Cutting her lunchtime short, she would save an hour and break off early. Her day's collection in addition to an early morning express was sufficient to keep her baby the following day till she returned in the evening.

"But it was exhausting," she admits. "On several occasions I wanted to give up but I also understood and could appreciate the benefits. My baby was never sick and yet I was away at work. I knew I needed her to stay healthy if I was to concentrate on my job," she explained.

This was a cost her family could not afford. Pross' husband was facing a rough season in his business. Her monthly salary was important income to keep the family afloat through that spell. Though times were better when she had her second and third child, she repeated the routine.

"I had seen first-hand what breastfeeding had done for my number one when the economics were not in our favour and I was willing to go through with it for all my children, she said.

Not all women are as determined. Even if they were, the environment is not always supportive of exclusive breastfeeding.

Take Prudence for example. The 23-year-old supermarket attendant can only afford a 20-minute break from her station at lunch time. With a high unemployment rate, a slight appearance of laxity could cost her a job. So she breastfed exclusively during the three-month maternity leave and returned to work where there was no space or room to breastfeed or even express breast milk.

She has to give her baby diluted pasteurised milk during the day and breastfeeds in the evening and all night.
"I hardly sleep at night but that is the sacrifice I have decided to make for him," she says.

Grace and Prudence's choices may not be the ideal. Like many urban women, they were not able to achieve the WHO recommendation to exclusively breastfeed for six months even if they wanted to. 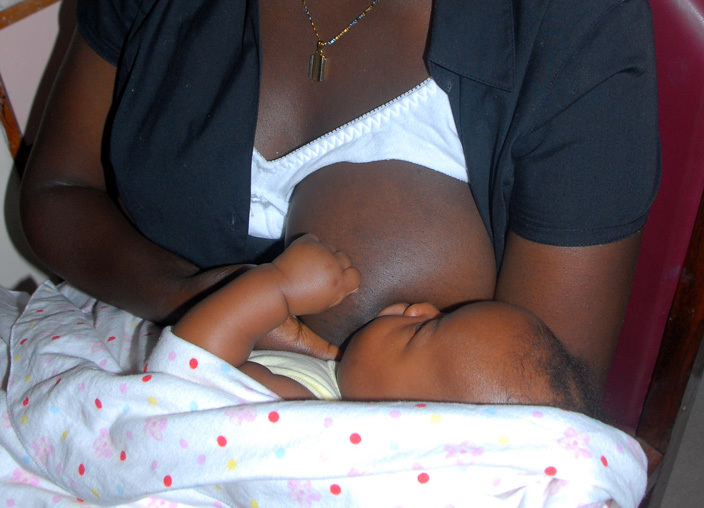 Was it worth the effort?

Studies show that each additional month of paid maternity leave decreases the infant mortality rates by 13%. Breastfeeding could avert over 800,000 child deaths annually and 20,000 deaths of women due to breast cancer if mothers breastfed optimally.

The Lancet Series suggest that in low-income and middle-income countries like Uganda, "the improvement of breastfeeding will contribute to the unfinished agenda of preventable infant and child deaths."

Apart from saving life, breastfeeding has social-economic gains as well. Writing in the Lancet breastfeeding series early this year, researchers stated that there is evidence that longer breastfeeding duration is associated with a 2•6 point increase in intelligence quotient (IQ) score.

Using 2012 data, they estimated that about $302billion annually (0.49% of world gross national income) is lost due to lower levels of intelligence when mothers do not breastfeed. At $231.4bn high income countries lost most. Eastern and southern Africa lost 100million USD of Gross National Income in 2012 due to limitations in ability to learn as a result of not breastfeeding.

Milk substitutes, on the other hand are expensive. Breastfeeding saves money. It is estimated that families worldwide spend $54billion annually on buying milk formula. In comparison, Uganda's Gross Domestic Product in 2014, at $27bn, was half that amount.

Because breast milk does not need any further preparation, it saves energy and water and is therefore gentle on the environment. Studies estimate that to produce one kilogram of formula powder requires more than 4000 litres of water along the production process.

Disposing of packaging materials for milk substitutes also impacts the environment. It is estimated that the USA alone disposes of 550 million cans, 86 000 tons of metal, and 364 000 tons of paper from milk substitutes to their landfills. In Asia, it is estimated that five countries annually generate almost 2.9 million tonnes of greenhouse gases from over 700,000 tonnes of milk formula sold.

Breastfeeding is therefore more than an individual mother's business; it is a public health good.  However, the Lancet Series argue that it has been limited to "more narrowly-defined agendas, such as nutrition."

How then do we get more mothers to breastfeed?

Pross believes in the power of social support. Her mother was her best champion, always finding nutritious foods, stepping in at home to help her with her babies as often as she could.

"I always had someone to consult when I found a challenge, like when the milk seemed to reduce. Mother would get me to eat all kinds of vegetables to boost my milk supply," she says.

In other actions, employers could make workplaces "family-friendly" by providing private and hygienic nursing spaces in or near workplaces, providing flexible working arrangements, nursing breaks for mothers.

Policy makers also have a role to play in ensuring adherence to international conventions and country laws, regulations and policies to support breastfeeding.
Each one of us can do something. What is your action?