Appearing before Commissions, State Authorities and State Enterprises (COSASE) committee, REA officials said they have not compensated individuals for the last two years.

They also complained that the bill has been accumulating year after year to the current bill of sh18b and there is no budget for the activity so far.

REA deputy executive director Godfrey Werikhe expressed concern that with the upcoming projects, the situation is likely to get worse.

"The compensation bill has continued to grow from year to year and the problem is likely to get worse as more projects that are lined up for implementation using funding from development partners kick off this financial year," he said.

He told the MPs that where the issue has reached, the Ministry of Finance either provides adequate funds to settle the debts or government amends the law to make the way leaves for rural electrification projects free as the case in other African countries. 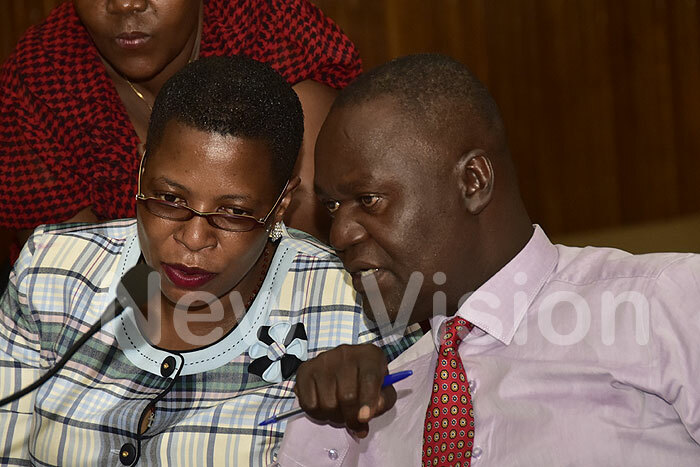 The chairman of the COSASE committee Abdu Katuntu (right) and his deputy Anitah Among interact during a health break of the committee session. (Credit: Maria Wamala)

When electricity transmission bodies undertake construction of rural electricity lines, destruction of crops and trees take place. They are required to pay the affected persons after the chief government valuer has valued the cost of the property.

REA director of Finance Patrick Kyakwagala however noted that although most projects are donor funded, compensation and taxes are supposed to be covered by government under counterpart funding.

But MPs insisted that as an agency of government, the peasants should be paid. "These are poor people's crops and trees that you destroy. How can you take all these years without paying them?"  MP Abdul Katuntu asked.

Mbarara Municipality MP Michael Tumusiime wondered whether the Agency had also budgeted for the individuals' interests on the money and whether had a debt recovery arrangement since a number of organizations owed them money.

MP Kashari South Nathan Itungo expressed concern that a number of people have been cheated of their money by scrupulous individuals.

He presented a letter where individuals in his constituency raised sh100m through a fundraising for power lines.

But REA officials denied knowledge of the payment but said they would investigate the matter.

Get your own fitness equipment

Get your own fitness equipment