MENU
Where have all the donkeys gone?
Previous Story

PIC: "We now see clearly that Somalis are taking over responsibilities in the country," said Ambassador Madeira. (Credit: AMISOM)

MOGADISHU - The Special Representative of the Chairperson of the African Union Commission (SRCC) for Somalia, Ambassador Francisco Madeira has commended Uganda for its role in pacifying and stabilizing Somalia.

Ambassador Madeira made the remarks at a medals award ceremony held in Mogadishu, for Ugandan Contingent's Formed Police Unit (FPU) that completed a year's tour of duty.

"Uganda is in the right path; Uganda is doing the right things; Uganda is sacrificing for Somalia but more importantly, Uganda is playing its part in the overall African Union objective of creating a united African Union," said Ambassador Madeira, who also commended the country for the spirit of  Pan Africanism. 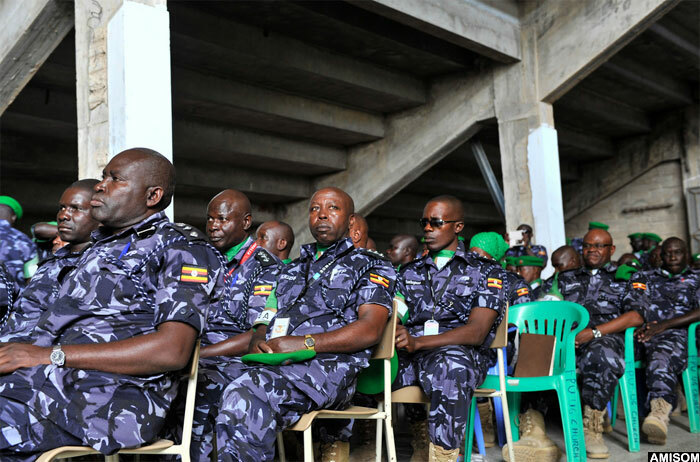 The ceremony was held in Somalia's capital Mogadishu. (Credit: AMISOM)


Madeira noted that Somalia had undergone major transformation, thanks to the role played by the Ugandan army and police, which, he noted, have helped in the establishment of the country's state institutions.

Uganda's Ambassador to Somalia, Prof. Sam Turyamuhika, spoke of the strong historical ties the two countries have enjoyed over a long period of time and pledged the country's continued support in pacifying Somalia.

"As long as the conditions allow, especially in respect to the police force, the co-operation between the Uganda Police and the Somali Police Force will go on even after we have formally withdrawn from AMISOM co-operation enablement," the ambassador added.

Christine Alalo, the Deputy AMISOM Police Commissioner hailed the Ugandan contingent, the fourth to serve in the peacekeeping mission, for a job well done. "I want to thank the Government of Uganda for allowing its personnel, the police to serve in Somalia towards peace building," Alalo said. The Uganda FPU Contingent Commander, Aliria Samuel Abbedi, hailed both AMISOM and Somali Police Force leadership for their support over the last one year, which enabled the officers to work tirelessly in improving security of Mogadishu and other towns.

Ambassador Madeira hailed the Ugandan contingent for excelling on the job. "You can now go home and say mission accomplished. You have accomplished your mission."

The FPU is tasked, with among others, public order management, providing operational support to the Somali Police Force and protecting  staff working for AMISOM, United Nations and African Union.

Mbuya: Pay to view the lake