Home
NEWS
Media
Supplements
Tenders
Notices
The refugee team was selected by the International Olympic Committee in June to compete under the Olympic flag.

The refugee team was selected by the International Olympic Committee in June to compete under the Olympic flag.

PIC: International Olympics Committee (IOC) 2016 olympics refugees team members run along a dirt road at a high altitude training camp, at the foot of the Ngong' hills, approximately 35km southeast of Nairobi, on July 25, 2016, in preparation for the 2016 Rio Olympic games. (AFP)

There will be more South Sudanese competing at the Rio Games in the Olympics refugee team than for the African state that will be taking part for the first time.

Five South Sudanese runners who make up half of the refugee Olympic Team arrived in Rio on Friday. For the likes of James Nyang Chiengjiek the troubles of home have cast a shadow over the tough preparations for the Games which start August 5.

South Sudan is allowed to send three runners who will take part with special invitations.

The refugee team was selected by the International Olympic Committee in June to compete under the Olympic flag as the world struggles with its biggest migrant crisis since World War II.

Apart from the South Sudanese there are Syrian swimmers Yusra Mardini and Rami Anis, Ethiopian marathon runner Yonas Kinde and judokas Yolande Bukasa Mabika and Popole Misenga, who come from Democratic Republic of the Congo and live in Brazil.

"The team has been training well in Ngong and I hope they perform well in Rio," said the athletes' Olympic co-ordinator Tegla Loroupe, referring to the town southwest of Nairobi where they have been training.

Beyond their sporting talent, the quintet's childhoods also bind them together. All come from families that fled civil war that broke out in Sudan in the 1980s and lasted until 2005.

None have lived in South Sudan since it split from its northern neighbour in 2011, but the pain of the new country's five years of on-off fighting since plays on their minds. 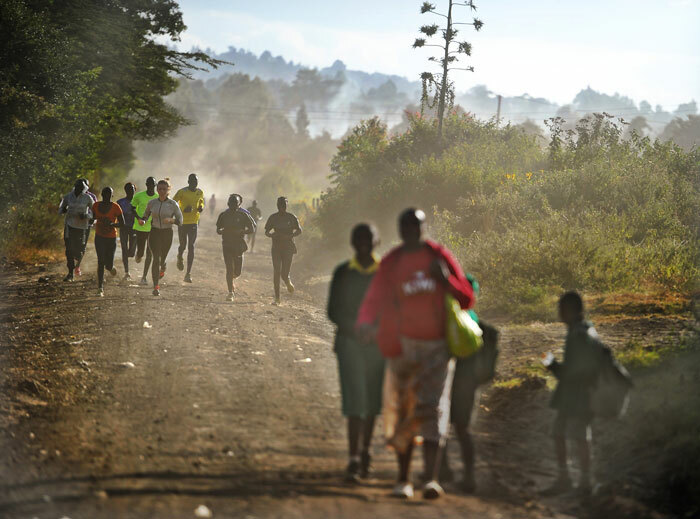 "It is so sad that our country is going backwards instead of moving forward," Chiengjiek, who will compete in the men's 400 metres told AFP.

"We hope our leaders will use our participation at the Olympics to bring peace to our people, since sport has long been considered a unifying factor," Chiengjiek added.

The athletes are training at Ngong, some 40 kilometres (25 miles) from the capital, following intensive two-week sessions running alongside elite Kenyan athletes.

Piech Bur Biel sought shelter with his mother and older brother in the Kakuma camp in 2002 aged seven. He believes that Olympic success could offer a chance to find his father.

"I may not be a good runner now," the 21-year-old said, modestly, "but it is my duty to go back and bring up others in my country," to an Olympic level. He wants to inspire the next generation of athletes to represent South Sudan.

After competing in the men's 800m, he hopes to return to Malakal, South Sudan's second largest town, undeterred by reports of army and rebel forces mobilising.

Biel had suffered from a lack of confidence that trainers say they had to worked hard to overcome.

Kenyan coach Joseph Domongole told AFP transforming athletes with raw ability into highly disciplined Olympians had been as big a mental challenge as it was physical.

"It wasn't easy at the beginning. We had to go through so many challenges to mould them and make them believe they can be good athletes," Domongole said.

A strategy of running cross-country before unleashing them to run alongside Kenyan athletes in competition had paid dividends, he said.

Chiengjiek agreed. "It was a big privilege to eat and train together with the Kenyans who are considered the best in the world. We now go to the Olympics with more confidence to face other top athletes. We will not be scared at all."

Domongole declared himself "very happy" with his proteges, who could now take on the world's best despite precious little training. "Normally it takes between two to five years to make a good athlete," Domongole said proudly.

He also believed the importance of their efforts would continue long after the Games.

"After the Olympics they will go back to their people as peace ambassadors and community builders," the coach said.

"Since they all come from different ethnic groups, they will serve to send a strong message that even though they were refugees, they can succeed in becoming good sportsmen."