Pope Francis to pay 'silent' visit to Ausc...
Next Story

Hillary Clinton and Donald Trump traded insults at opposite ends of the country Friday, taking their fight for the White House to rival battleground states and portraying starkly different visions of America.

Clinton followed her historic acceptance speech on Thursday as the first woman presidential nominee for a major party with a rally in Philadelphia before embarking on a bus tour of Rust Belt states Pennsylvania and Ohio.

In Colorado, a key state out west, her Republican opponent promised "no more Mr Nice Guy," trashing Clinton's speech as "average," calling her a liar and promising to end the migration of Syrian refugees.

"I'm starting to agree with you," the 70-year-old told supporters chanting "lock her up, lock her up" in Colorado Springs. "I'm taking the gloves off," he said. "Just remember this Trump is going to be no more Mr Nice Guy."

Just over 100 days before the election, Americans are being asked to choose between two sharply polarized visions -- and between two monumentally unpopular candidates.

"I can't think of an election that is more important, certainly in my lifetime," Clinton told supporters at the rally in Philadelphia.

The 68-year-old Democrat portrays Trump as a threat to democracy, seeking to woo moderate Republicans repelled by the former reality TV star and shore up a coalition with progressives on the left of her party. 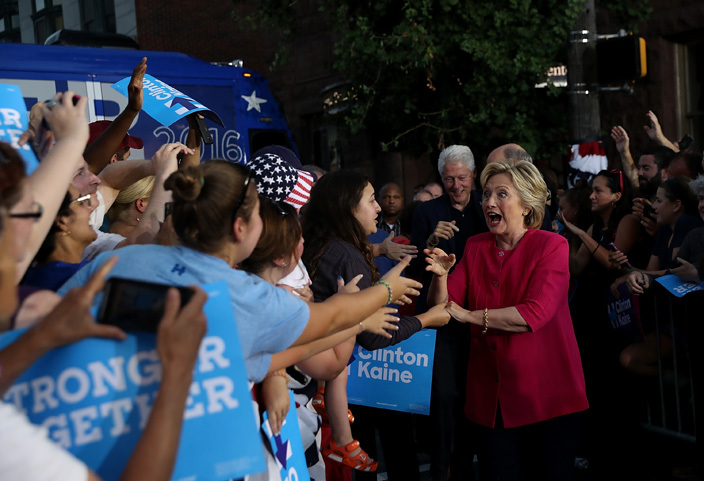 "Donald Trump painted a picture, a negative, dark, divisive picture of a country in decline," she said.

"I'm not telling you that everything is peachy keen -- I'm telling you we've made progress, but we have work to do."

She promises to focus on parts of the country that have been "left out and left behind" -- constituencies where declining living standards, fears about safety and lost jobs have fueled support for Trump.

Trump, who has never previously held office, portrays himself as the law and order candidate -- the outsider who will shake up an out-of-touch Washington, restore jobs, cut the deficit and end illegal immigration.

"This country, if they choose her, this country will not be in good shape," Trump told ABC News on Friday.

"She doesn't know how to win, she's not a winner," he said in an excerpt of the interview set to air Sunday.

In Colorado, Trump goaded Clinton on her failure to hold a news conference since December and accused her of lying to the FBI over its investigation of her email scandal as secretary of state.

"We're going to stop the Syrian migrants from coming into the United States," he said referring to the killing of a French priest, whose attackers proclaimed allegiance to the Islamic State extremist group.

Trump's campaign, which has trailed in fundraising behind Clinton, released a new ad Friday saying that in Clinton's America "things get worse" with taxes going up, terrorism spreading and voters losing jobs, homes and hope.

Trump also posted a social media clip mocking Clinton's husband and former president Bill Clinton for appearing to doze off during her speech.

Clinton needs to win over disgruntled working class voters, who have formed the backbone of Trump's base. She has derided the real estate mogul for making so many of his products overseas and for alienating women, Hispanics and Muslims.

On her bus tour, she is accompanied by her husband, her running mate Virginia Senator Tim Kaine and his wife Anne.

The so-called Rust Belt states are vital parts of almost any strategy to garner the 270 electoral college votes needed to win the presidency.

"We're going to be drawing that contrast between Hillary Clinton's plans for our country and Donald Trump's empty promises," Kaine said Friday.

Experts predict that "negative partisanship" -- voting against a candidate -- will play a major role in deciding who makes it to the White House.

Clinton's unpopularity is second only to Trump's, with a disapproval rating of 55 percent compared to his 57 percent, according to recent averages.

When it comes to voter intentions, Trump and Clinton are in a statistical dead heat, according to the most recent poll average from RealClearPolitics.

Schools may close during UNEB exams