Somali female athletes jog during a training session at Banadir Stadium in Mogadishu.

In the remodelled Banaadir Stadium, situated in the heart of Somali capital, Mogadishu, a group of track and field athletes go through their paces in the blistering mid-morning sun. Of the group, two of the athletes will represent Somalia in the 2016 Summer Olympics, which commences early next month in Rio de Janeiro, Brazil.

Maryan Nuh Muse and Mohamed Daud Mohamed will fly the country's flag when they participate in the track and field races.

It will not be the first time Maryan is representing her country in track and field competitions. She has represented Somalia at regional, continental and international youth competitions held in Kenya, Republic of Congo, Botswana, Tanzania, Ethiopia and China among other countries.

The athlete will be competing in the 400 metres race and believes she has what it takes to reach the finals and even win a medal.

She says; "A number of countries will be participating among them Jamaica and United States; but I am hoping to shine. We don't have the same training facilities, theirs is better than ours. I know they are determined to win but we are also equally determined." 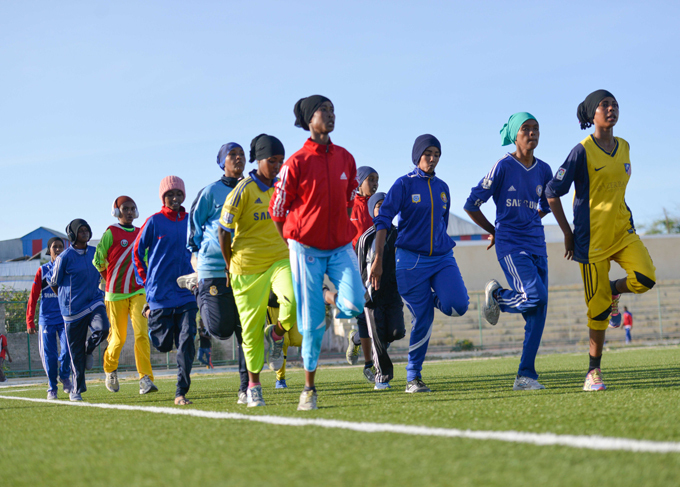 Her colleague, Kenyan-born Mohamed, was until recently a soccer player. He has since transitioned to become a middle distance runner for 5,000 metres. The Rio games will be his first appearance at an international athletic event.

"I am improving by the day and I hope to improve on my finish time. Running is hard and all athletes aim to win. My objective is to win; but there are different ways of winning. It is not about being first, second or third. If I set a new personal record, it is a win for me," Mohamed Daud Mohamed explains.

The two will face stiff competition not only from other Somali-born athletes that have since changed citizenship to run for other countries such as British champion Mo Farah, and Canadian Mohamed Ahmed, but also the crème de la crème of Kenya and Ethiopia.

In addition, Somalia's representative in the 2012 London Olympics, Mohamed Hassan Mohamed, defected to Europe after the end of the games.

Somalia athletics coach, Mohamud Adow Nur, offers perspective on the departures of several Somali-born athletes that run for other adopted countries, while others go to exile.

"During the 1970s, top athletes would be enlisted into the military. It was prestigious. Then in the 1980s, athletes would be awarded scholarships for further studies abroad. When the Government collapsed in the 1990s, the objective of the athletes was to work hard and escape the hard life," explains Nur. 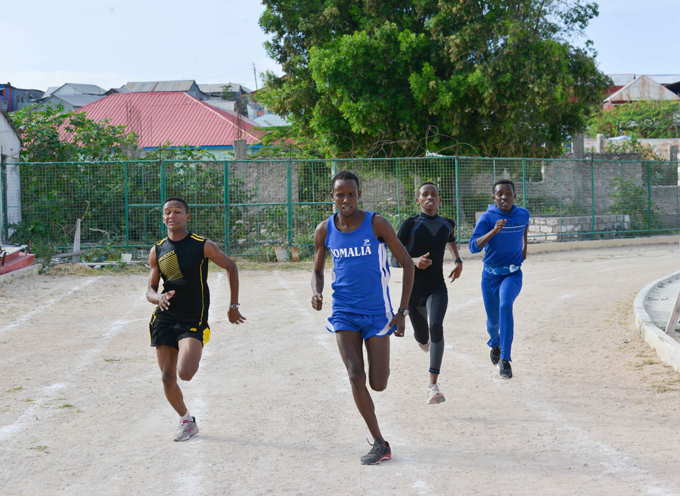 Mohamed races with other athletes during training at Banadir Stadium.

Somalia is recovering from a long war that has ravaged much of the country leading to the collapse of the critical institutions. The once well-established sports sector that nurtured and horned many young sportsmen also collapsed, leaving many with no training facilities. With the restoration of peace, Mohamud is hopeful Somalia will recover its past glory as an athletics powerhouse.

At the Banaadir Stadium, the athletes assemble daily for training sessions. The facilities are shared with footballers who train for various interregional soccer tournaments.

Despite the challenges, Khadija Aden Dahir, the President of the Somali Athletics Federation is hopeful things will change for the better.

"You can see our stadium. It lacks a modern track for athletics. When athletes are training, they get injured because it has gravel. We have contacted many organisations for support and we are still hopeful that help will come," Khadija adds. Coach Nur acknowledges that the duo might be far from being medal hopefuls; but will be worthy competitors.

All told, the two athletes will be aiming for the stars in Rio de Janeiro.

The vibrant sporting activities being witnessed in Somalia today is as a result of the relative peace being enjoyed in the country.

The African Union in Mission in Somalia (AMISOM), working with Somali security institutions have restored normalcy in almost every facet of life in Somalia, including in sports, which was hitherto banned by militant group Al Shabaab.

As a dividend of peace, sports has given thousands of young people in Somalia a second chance in life. Many of them engage in sports to steer away from illegal activities, such as terrorism.

The status of investment and UIA's checkered path over 25 years