MENU
Baby dies after being given 'laughing gas'
Previous Story

"This election, and every election, is about who will have the power to shape our children for the next four or eight years of their lives."

"This election, and every election, is about who will have the power to shape our children for the next four or eight years of their lives."

When her husband first ran for president in 2008, Michelle Obama cautiously entered the political arena, fully supportive of his candidacy yet wary of the country's partisan battles.

Two terms later, the first lady known for her wit, style and tact has emerged as a political force, and on Monday she electrified the Democratic National Convention with an impassioned endorsement for Clinton that brought the crowd to its feet.

With a determined look and a big smile, the current first lady lauded the former first lady, making the link between the woman who would be America's first female president and her hopes for her two teenage daughters, Sasha and Malia.

"The hateful language they hear from public figures on TV does not represent the true spirit of this country," Obama said, in a thinly veiled swipe at Republican presidential nominee Donald Trump, who will battle Clinton at the polls on November 8.

"We know that our words and actions matter not just to our girls, but to children across this country," said the 52-year-old Obama, a Harvard-educated lawyer.

"This election, and every election, is about who will have the power to shape our children for the next four or eight years of their lives," she said.

"Hillary Clinton has never quit on anything in her life." 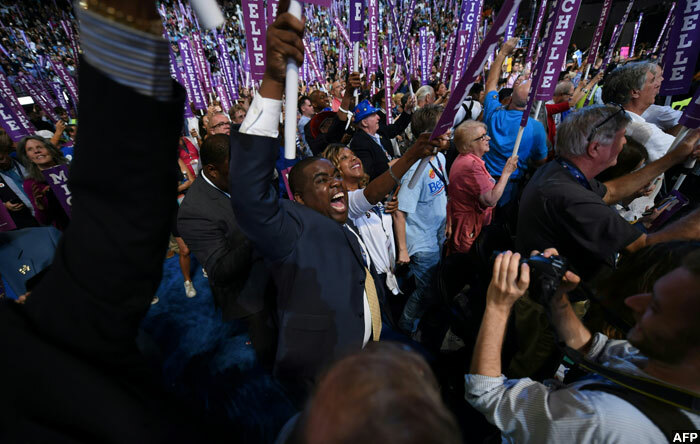 Armed with popularity ratings above 60 percent, Michelle Obama knows how to captivate an audience: at the 2008 convention in Denver, Colorado, she stepped into the national spotlight with remarks that stressed her husband Barack's commitment to American values.

That speech resurfaced last week thanks to none other than Trump. The billionaire's wife Melania introduced herself as a political spouse with words that borrowed from Michelle's 2008 speech.

At the 2012 convention in Charlotte, South Carolina, Michelle said that even after four years as head of state, her husband was the same man.

"I have seen firsthand that being president doesn't change who you are -- it reveals who you are," she said.

In stumping for Clinton, Michelle has set aside any gripes left over from the tense 2008 campaign that saw her husband and this year's Democratic nominee exchange barbs.

"Because of Hillary Clinton, my daughters -- and all our sons and daughters -- now take for granted that a woman can be president of the United States," she said Monday night to the packed arena in Philadelphia.

The Obamas know that a Clinton administration is the best way to preserve the president's accomplishments, including health care reform, the Iran nuclear deal and renewed relations with Cuba, said Peter Slevin, a Northwestern University professor who wrote the first lady's biography. 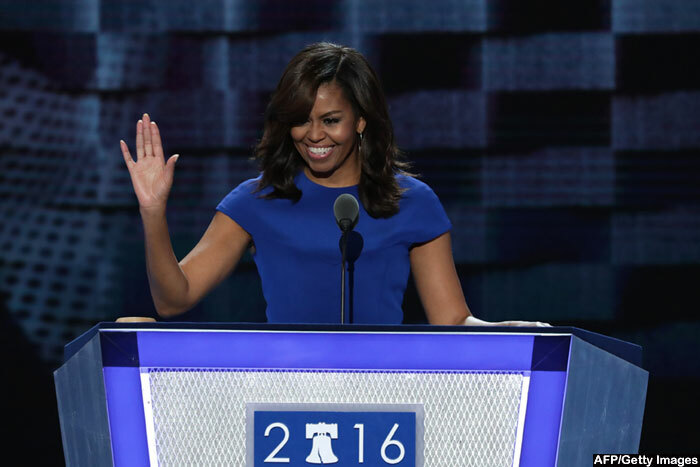 Her reputation as a political superstar has fueled rumors that Michelle might have her own presidential ambitions.

But she has no plans to follow the lead of Clinton, also a former first lady who later become secretary of state.

"Though she has proven to be very good at delivering political messages, at pushing policies that are important to the administration, I think she just could not bear the idea of running for office and raising money and doing all the things you have to do if you are in office."

The first lady told a group of children in April that a White House bid was not in the cards.

"Hillary Clinton is an impressive woman. I will not do what she has done -- I will not run for president," she said. "But there are other things that I want to do to stay involved in working in public service."

Her husband Barack has also tried to cut through the speculation that the Obamas might try to keep living at the White House.

"There are three things that are certain in life: Death, taxes and Michelle is not running for president," he said earlier this year.

Clinton 'must become' next US president - Sanders

The gun seems to have become the symbol of peace in Uganda!