She is an 800-metre runner who was banned over drug cheating. He worked for Russia's anti-doping agency.

Together Yuliya Stepanova, 30, and her husband Vitaly unleashed a flurry of damning accusations that helped take down Russian athletics and led to the World Anti-Doping Agency's report that uncovered state-run doping across several Olympic sports in Russia.

The International Olympic Committee, however, decided on Sunday that Stepanova would not compete in the Rio Olympics next month despite her role as a whistleblower.

The IOC also neglected to impose a total ban on Russian competitors for the Games, instead leaving it up to individual sports federations to decide whether Russian athletes can go to Brazil.

In 2014, the couple appeared in a German television documentary, where video and audio recordings they made secretly lifted the lid on systematic doping fraud and corruption in Russian athletics.

The Stepanovs claimed that officials within the now-disgraced Russian athletics federation supplied banned substances in exchange for five percent of an athlete's earnings.

Stepanova added that it was also common for Russian athletes training outside Russia to avoid out-of-competition testing by using false names. 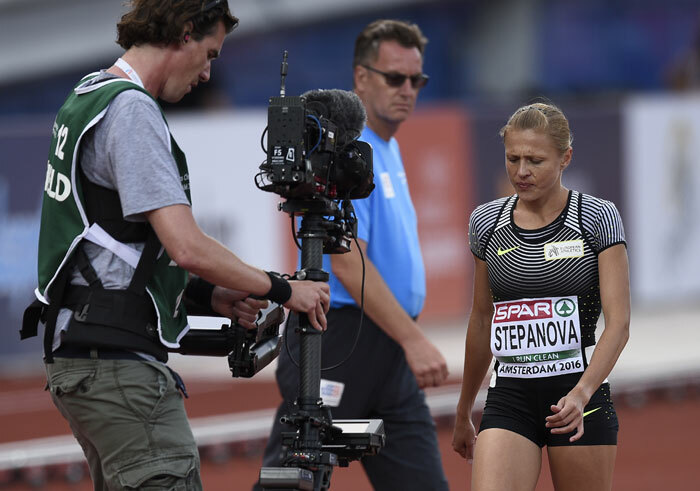 Stepanova will not compete in the Rio Olympics next month despite her role as a whistleblower. (AFP)

In response to the allegations the (WADA) set up an independent commission to investigate.

It produced a bombshell report last November backing up the claims of state-sponsored doping and paving the way for athletics' international body, the IAAF, to suspend Russia.

The Stepanovs' actions have come at a high personal cost.

Following the startling revelations they were demonised in Russia as traitors, but by then they had already fled the country.

The couple left their homeland for Germany with their then eight-month-old son and now split their time between Canada and the United States.

But Stepanova was hailed by international sports authorities for speaking out.

Stepanova, who served a two-year doping ban before turning informer with her husband, was also left out of the Russian Olympic squad named last week for Rio.

"The pressure was very hard, I had a lot of people who did not believe me," Stepanova said, speaking at the European championships in Amsterdam earlier this month, where she was afforded a muted reception by the crowd as she took part as a "neutral".

Stepanova added: "The thing which Russian media did not believe is the fact that we're telling the truth. They thought we wanted revenge, that's the idea Russians have got from my story.

"Russia still does not believe in this, that the doping stories are really not true."

Stepanova insisted that she had received a warm welcome from fellow athletes.

"When I was sitting in the changing room, all the girls from the direct opposition I had today came up to me and said thank you for what you've done and being brave. They have supported me a lot, I do feel supported by European athletes," she said.

Stepanova, however, denied that Russian President Vladimir Putin had called her a traitor and also had "no comment" when asked if she thought her life was in danger.