Otinga, the Acholi leader who has fathered...
Next Story

If you found the whole experience too nauseating, there is a sick bag hanging by the entrance.

Here, customers being served a drink from a squat toilet at the "Jamban Cafe" in the city of Semarang on Java island, Indonesia. (AFP)

If you found the whole experience too nauseating, there is a sick bag hanging by the entrance.

If this finds you eating, you may want to put that plate or glass of juice aside . . .

A toilet-themed cafe where customers dine on meatballs floating in soup-filled latrines may not be everyone's idea of haute cuisine, but Indonesians are flocking to become privy to the latest lavatorial trend.

Guests at the "Jamban Cafe" sit on upright toilets around a table where food is served in squat loos.

On a recent visit to the venue, in Semarang on Java island, traditional Indonesian "bakso" -- a type of meatball -- bobbed in a murky soup in one toilet, while a second contained a brightly-coloured, alcohol-free cocktail.

For those who found the whole experience too nauseating, there was a sick bag hanging by the entrance.

Other places, such as Taiwan and Russia, are home to similar themed restaurants, but Indonesia's modest version has a key difference -- it aims to educate people about sanitation and encourage the increased use of toilets.

"I was disgusted at first, but I eventually ate some of the food out of curiosity," said customer Mukodas, a 27-year-old who, like many Indonesians, goes by one name.

"I think the idea is pretty interesting because if you try to have a campaign without a gimmick like this, the information won't stick." 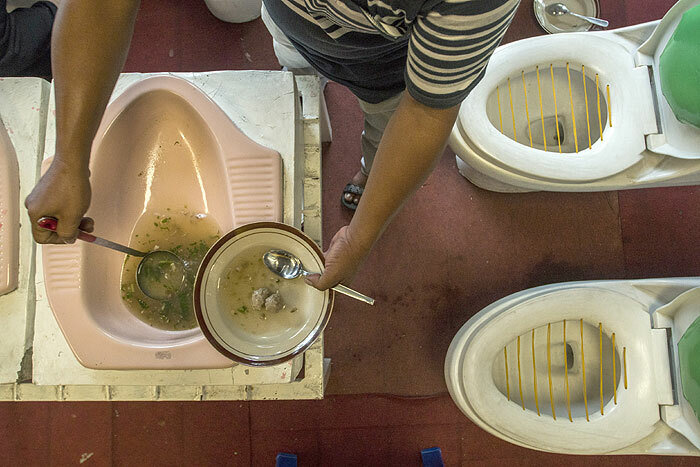 Meatball soup. From a squat toilet. Anyone? (AFP)

Another customer, 15-year-old Annisa Dhea, conceded she initially found the toilet treats "a bit unappealing" but felt somewhat reassured after "the owner told me that the food was clean and hygienic".

The café -- whose name "Jamban" means toilet in Indonesian -- has been open since April and currently only welcomes small groups who book ahead.

Owner Budi Laksono, a public health expert who used to work for the local government, hosts discussions with customers and shows them videos as he seeks to encourage people to use dedicated facilities for their bodily functions.

Millions of Indonesians live below the poverty line and the country has one of the world's highest rates of open defecation -- defecating outside and not in a designated toilet -- a practice blamed for spreading disease.

"This café serves as a reminder that many people in Indonesia still do not have toilets," said Laksono, 52.

However he admitted that his unusual approach had sparked some controversy in the Muslim-majority country.

"Many critics say the café is inappropriate and against Islamic law," he said.