Crested Crane on way to extinction
Next Story

Read the New Vision to know why FDC has quit the Inter-party Organisation for Dialogue (IPOD). FDC is the biggest opposition party, so will IPOD still make meaning if FDC has pulled out?

Find out why Speciosa Kazibwe has lost her bid to be the chairperson of the African Union, and which candidates are still in the race. Also find out why the elections have been suspended after the second round of voting.

In an update on the Sudan fighting, the Uganda border is still closed. Then how is Uganda rescuing its nationals from the war-torn country? Do not miss a copy of the New Vision.

Famous Catholic preacher JB Mukajjanga died of a blood clot, according to doctors. Then why is the Police still holding onto his car? Read the New Vision to have the latest news.

Former Vice-President Gilbert Bukenya says he has quit politics for farming.  But instead of practicing what he studied, which is public health, why has Bukenya decided to go into farming? Get his full explanation inside and why he says farming is better than politics.

A soldier who has been linked to eight murders has been killed in a shootout. We have a list of murders, how the soldier was involved and how he was killed. 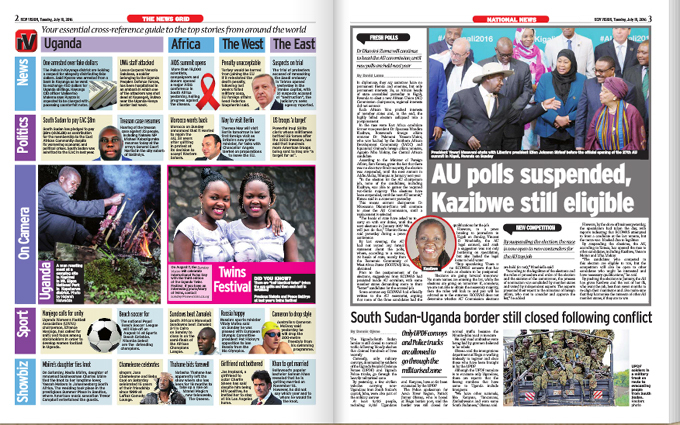 Traders in Kampala have asked the capital city authority to evict the vendors who are back on the streets. The vendors had been kicked off the streets, so how did they come back? Read the background to what is happening and how the vendors are a threat to honest trade and security.

Egypt has again rejected an agreement signed by 11 countries on how to share the Nile waters. Egypt wants powers to approve every proposed project on the Nile. Find other demands from Egypt and what the other countries, including Uganda, have decided to do about these demands.

Mbogo Progressive Secondary School in Mukono town has been closed over poor hygiene and lack of a licence to operate. The school was so filthy, the district health inspector said. New Vision has the full story and pictures.

Over 300 people have lost millions to a fake micro-finance bank in Kagadi town. We have the details of how the managers of this fake bank fooled so many people and fled with their money. Who are the suspects, have they been arrested or not, and do the poor people have any hope of recovering their money? New Vision has the full story.

Uganda has deployed more troops in Somalia in spite of releasing a timetable to withdraw from the war-torn country. Find out why Uganda is sending more troops to Somalia. We have the number of soldiers sent and where they will be deployed.

Kalangala district has stopped over 200 Rwandans from fishing at Kasekulo. Find out why the Rwandans have been banned from fishing, and how the district is enforcing the ban.