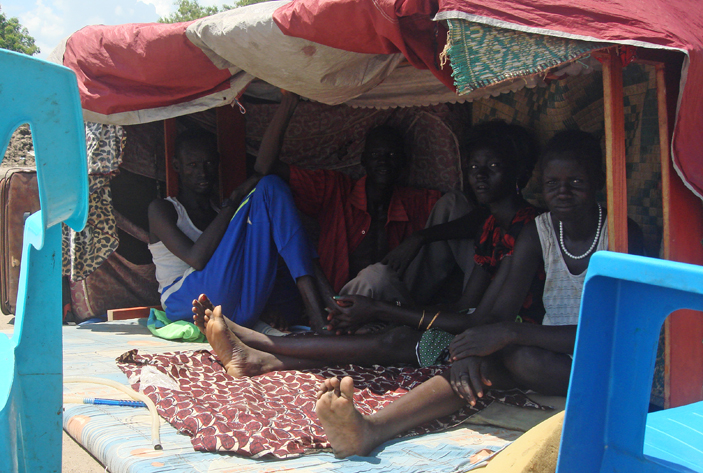 People resting in the shade at the UN compound in the Tomping area in Juba. AFP Photo

Corpses are still being collected around burned out tanks in South Sudan's capital Juba, a week after intense battles left hundreds dead and a peace deal in tatters.

The latest clashes in a war that broke out in December 2013 pitted soldiers loyal to President Salva Kiir against troops backing his long time rival Vice-President Riek Machar, who technically ended his rebellion to forge a unity government in April.

A shaky ceasefire has held since late Monday, when Machar's men were forced to flee after government troops in tanks and helicopter gunships pounded their positions with overwhelming firepower.

But what's next for South Sudan? And is there any remaining hope of peace?

Is the peace deal dead?

Juba is mostly calm but many fear a return to conflict.

A string of peace deals signed since the start of the war failed to stop the fighting, and critics point out that placing two rival armies in the same city was a recipe for disaster.

Building trust between rival forces, and reining militias back in will tricky, while governance in the country will remain in limbo until new political and military deals are struck.

Even getting Machar and Kiir to talk face-to-face will be tough, and striking another deal daunting.

What can international pressure do?

Critics say talk of an arms embargo is too little too late in a country awash with weapons, while UN sanctions already slapped on top commanders from both sides did nothing to stem the violence.

More peacekeepers may not make the UN mission any more effective. The UN has been widely criticised for failing to intervene between the two sides, instead hunkering down inside its bases, where over half of the peacekeepers are tied up guarding 160,000 civilians sheltering behind razor wire.

Will a regional military force be deployed?

Regional bloc IGAD raised the possibility of deploying an "intervention brigade" with a more aggressive mandate, but Kiir is not having it. "We will not accept even a single soldier," he said.

Machar has not been seen in public since the July 8 shootout at the presidential palace on the eve of South Sudan's fifth anniversary of independence.

His spokesmen say he left Juba, while he himself told the BBC he remains in the city. Kiir, who says he has spoken to Machar, has called for a meeting to salvage peace.

Machar lost some of his most loyal troops in the battle -- those who survived are reported to have fled the city -- and his authority over his generals and troops is also in question.

In Machar's absence from Juba some top opposition leaders, such as Taban Deng Gai, have said they can negotiate without him, raising the possibility of further splits.

Will the humanitarian crisis worsen?

With over 55 aid workers killed since December 2013, the recent violence in Juba -- which included deliberate attacks on international compounds -- may prove the last straw for some agencies, leaving huge gaps in lifesaving services.

Over a third of South Sudan's population are expected to face severe food shortages over the coming months, and there is a real risk of what the UN has termed a "hunger catastrophe."

The UN as well as several aid agencies and embassies have pulled out "non-critical" staff.

The economy is in ruins, inflation has eroded savings and salaries, and without another round of massive international support there is little cash to rebuild. But there is not much appetite among donors to add to the billions already poured into failed development projects.