Steven, a young orphaned boy from the recent fighting in Juba who has lost his family from the fighting in Munuki stands in a Juba street. AFP Photo

The smell of rotting bodies drifts across the central hospital in South Sudan's capital Juba, victims being taken for mass burial, shot during violence threatening a return to all out war.

The latest batch of 17 bodies was collected from the streets after baking in the sun for days, and brought to the hospital's morgue for identification. The corpses were put into body bags then lifted onto a large truck.

They join more than 200 already buried in mass graves by the Red Cross.

"We are doing what we can," said Andrea Catta Preta, from the International Committee of the Red Cross (ICRC).

Some sat quietly in the shade of a tree, heads between legs, retching at the foul stench.

'They drove a tank through houses'

As during the much of the civil war that started in December 2013, killings during the latest fighting happened along ethnic lines. Survivors and witnesses reported that gunmen asked what language people spoke and then shot them if it was that of a rival tribe.

Those who fled described wanton destruction.

"They drove a tank through houses," said 27-year old Jacky, a mother of three sheltering in the compound of the St. Theresa Catholic Cathedral. "Mine they burned."

There was widespread looting too and the ransacking of the main warehouse for the UN's World Food Programme (WFP), where more than 4,500 tons of supplies were stored, enough to feed 220,000 people for a month. 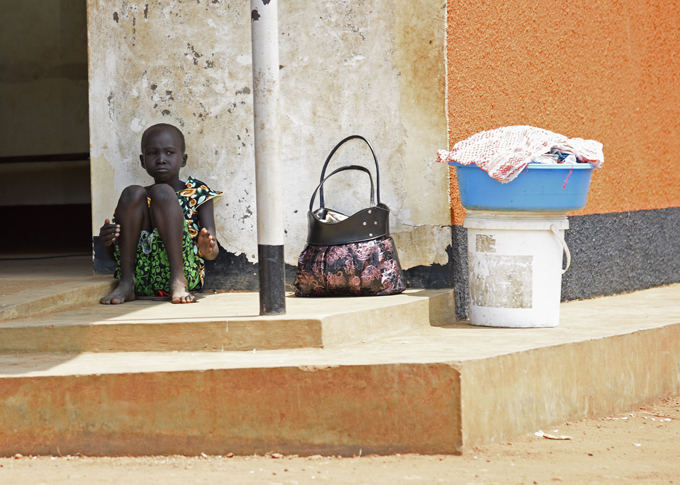 There is no precise official toll of how many died, either in the recent fighting in Juba or in the wider war that began in December 2013. Overall, tens of thousands is the best guess.

The latest violence echoed the start of the civil war with fighting starting in Juba, and marks a fresh blow to a struggling peace deal aimed at ending the bitter conflict that began when President Salva Kiir accused ex-rebel and now Vice President Riek Machar of plotting a coup.

Hundreds died in this last spasm of violence, which began with a shootout at the presidential palace on the eve of South Sudan's fifth anniversary of independence.

Posters celebrating the anniversary are, like the gates of the presidential palace, riddled with bullet marks, the concrete walls they're stuck to pocked with fist-sized holes.

Scorched trees on the main avenue showed the intensity of the battle.

"Sincerely speaking, there are conflicting versions how it began," army spokesman Lul Ruai Koang said Friday in his office inside the heavily fortified army headquarters guarded by tanks. Each side has accused the other of starting the fighting, he said.

"What is important, is that we are committed to the peace deal, we are hopeful it can work."

'The dead lined the streets'

Fighting at the presidential palace escalated into battles between two rival armies. For now, Machar's troops "have been pushed out" of the city, Koang said. "We are not pursuing them."

Approaching army headquarters, along a smooth highway towards the outskirts of Juba, signs of the battle were everywhere. 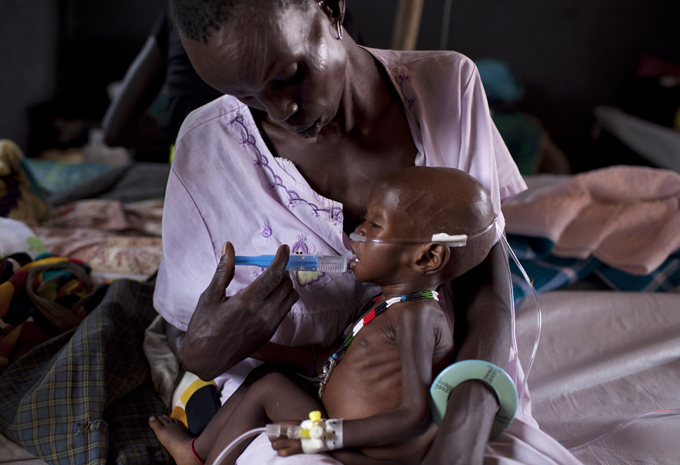 A child suffering from severe malnutrition being assisted by medical staff in a medical camp run by international humanitarian organisation Doctors without Borders in Minkamman, South Sudan. AFP Photo

An unfinished six-story building, occupied by Machar's troops, has door sized chunks of concrete smashed out of it by explosions while the tin roofs of nearby houses are punched in by artillery shells.

The World Health Organization (WHO) says at least 300 died in the city where a tense calm has held since a ceasefire on Monday.

Residents who fled said whole districts were left in ruins, with houses torched or simply smashed by tanks.

But Red Cross officials are still trying to access parts of the city hardest hit by the fighting -- which involved tanks and helicopter gunships firing into densely populated areas -- and many fear the number killed could be far higher.

Soldiers said it was some of the most intense fighting they had seen.

"I have been a soldier since I was a child," said 50-year-old Richard Bida, a lieutenant, seeking food handouts at a church in Juba after he too was forced to flee the fighting.

"I have never experienced a battle like that. It was soldier on soldier, and then soldier on civilian. The dead lined the streets."

South Sudan: what hope for peace?