The NRM district chairpersons also supported a proposal spearheaded by the Kyankwanzi woman MP, Rosemary Nankabirwa that Article 102 (b) of the constitution be amended to lift the 75-year age limit

The NRM district chairpersons also supported a proposal spearheaded by the Kyankwanzi woman MP, Rosemary Nankabirwa that Article 102 (b) of the constitution be amended to lift the 75-year age limit

A total of 120 district chairpersons of the National Resistance Movement (NRM) on Wednesday made several requests to President Yoweri Museveni, who is also the party chairman, including requesting him to stand again in2021 general elections.

The NRM district chairpersons also supported a proposal spearheaded by the Kyankwanzi woman MP, Rosemary Nankabirwa that Article 102 (b) of the constitution be amended to lift the 75-year age limit for any Ugandan to contest for President.

The endorsement of Nankabirwa's proposal was contained in the memorandum of all chairpersons, which was read to Museveni by Eng. Twaha Sonko, the party's district chairperson of Kalungu. This was during a dinner at Hotel Africana, which the chairpersons organised to thank Museveni for what they described as "his good leadership" to the party and the country.

Under the theme, "Igniting the centrality of district chairpersons in the performance and growth of NRM to help Uganda achieve the middle income status," the chairpersons also asked Museveni and the party's secretary general, Justine Kasule Lumumba, to avail them with vehicles in order to boost the monitoring of government programmes in their areas. 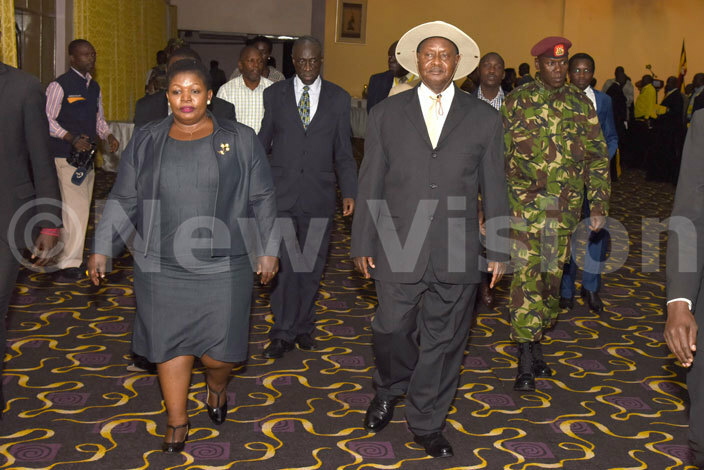 Kampala Central NRM chairperson, Salim Uhuru, said: "We, the district chairpersons have taken this initiative with the sole aim of improving our party by making suggestions that will not only make us fulfill our mandate as indicated in NRM constitution, but also make the national party leadership tap into our potential and capabilities for the overall benefit of the party and our involvement in Government programs."

Museveni made the pledge to give every NRM district chairperson a vehicle in September 2015 during the National Executive Council meeting at Entebbe State House.

The party district chairpersons also requested Museveni to include them in the Central Executive Committee of the party.

"We request that the chairperson of this forum or any other district chairperson be among the five central executive committee members nominated by the President," Sonko said.

Other requests included provision of a mobilization fund to their offices, providing them with official identity cards and including them in the national and district protocol.
They also aggregated challenges faced by all districts.

"These were reached at by collecting views from as many chairpersons as possible and then identifying the most cross-cutting among the districts. We acknowledge that some districts due to their peculiarities may have other concerns but what is presented here provides a ‘bigger' picture of all the districts," Sonko said.

They stressed the issue of lack of transport means, lack of reporting and communication mechanism with the party chairman, lack of financial facilitation to the district office, elections management and candidates' indiscipline.

Others were lack of permanent homes for the district offices, lack of coordination with the NRM electoral commission and lack of recognition of district chairmen by local government and other key government officials.

Parliament parties over the years