Kinaawa residents stumble upon a dead man
Next Story

Uganda has sunk 75 boreholes in various districts with a grant provided by the Arab Republic of Egypt.

The money used to sink the boreholes is part of the $30m grant (sh101b) Egypt has offered Uganda to undertake projects geared towards promoting prosperity and sustainable water management in Uganda.

Part of the grant will be spent on setting five valley tanks in selected parts of the country and dredging River Nyamwamba in Kasese.

The Egyptian minister for water resources and irrigation, Mohamed Abdel, handed over a bulldozer, an excavator and two trucks which will be used to set up the valley tanks in Lyantonde, Rakai, Oyam, Soroti and Apac districts.

The ceremony took place at the National Forestry Authority headquarters in Kampala on Tuesday.

During an earlier meeting with the minister for water and environment, Sam Cheptoris, at the ministry headquarters in Luzira, a Kampala suburb, Abdel said part of the grant will be spent on dredging River Nyamwamba and reinforcing its banks with robust infrastructure.

A number of people have died and property lost to floods from River Nyamwamba in the recent past.

"We have a good bilateral cooperation with Uganda dating back to 1940s when we contributed $250m (sh844b) towards the building of Owen Falls Dam," the minister said, "We will continue to provide support to projects aimed at promoting prosperity and sustainable water resource management,". 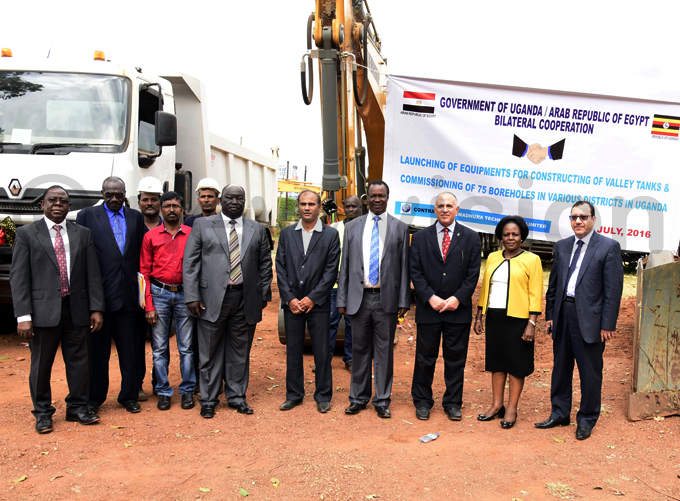 In 1999, Egypt assisted Uganda in eliminating a weed that had blocked the ‘exit' of Lake Kyoga.

However, Egypt's interventions aimed at assisting Uganda to harvest rain and foster sustainable water resource management are partly intended to reduce pressure on River Nile and water bodies that serve as its tributaries. River Nile is the only water source for the North African country.

Cheptoris commended the Arab Republic of Egypt for its bilateral assistance to Uganda, stating that the ‘unending' relationship between the two counties is ‘sealed' by the waters of the Nile.

"Our relationship cannot end. It can only be strengthened. Your interventions will go a long way in supporting our efforts to increase access to safe and clean water," he added.

There has to be solution to Kasese floods