The affected families petitioned President Museveni, urging him to intervene in the land wrangle.

The affected families petitioned President Museveni, urging him to intervene in the land wrangle.

KAMPALA - The State House land tribunal has started to arbitrate in land wrangles where as many as 80 families are facing eviction from Musajjalumbwa residential flats in Mengo, Kampala, following the imminent expiry of the lease of the land on which the flats sit.

Recently Edward Sempebwa, who is the late Ereneste Sempembwa's son, through his lawyers Sebalu and Company Advocates gave them a notice of intention to evict them from the flats by October this year.

The tribunal is a government body that has been set up by President Yoweri Museveni under his constitutional right to protect the rights of peasants that are increasingly facing evictions from their land.

"President Museveni has urged Parliament to appropriate money in the land fund. It will eventually resolve this issue. The tenant will borrow and pay off the landlord. This is a fair solution," said Bananuka.

Tribunal chairman Ochieng said: "This will give you bargaining power to renew the lease as a registered company but not fighting as individuals."

The affected  families petitioned President Museveni, urging him to intervene in the land wrangle.  In the petition received by State House on June 22 and signed by over 60 families, the residents argued that they bought the flats from the lease holder, the Aga Khan Ismailia Community.

In their petition they argued that the administrators of the estate of the late Sempembwa - the land owner - had instructed them to relinquish their legal rights they have acquired after buying the flats.

Abdurahiman Adam, the vice chairman of Musajjalumbwa flats, said they protest the eviction, arguing that "we are no longer mere tenants but had since bought the flats from the AgaKhan Ismailia Community."

The first hearing of the tribunal took place at State House land arbitration office on Friday at Nakasero Kampala. Over 30 petitioners accused Mohamod Alibhai, the director Rubaga Building Company Limited (RBCL) on behalf of the Agakhan Ismailia Community, for duping them into buy the flats, which they described as contrary to the lease agreement. 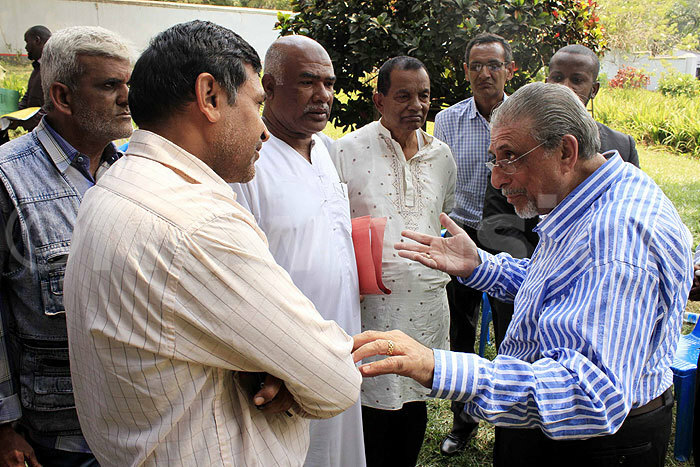 The tribunal is expected to meet the administrators of the estates of the late Sempembwa to give in their views about the renewal of the lease of the land under contention.

Led by  their leader Ilamdin Pehlwan, who is also the Musajjalumbwa village chairperson,  they explained that Alibhai neither disclosed to the buyers that RBCL was not the legal land owner nor did he inform them that the 49-year lease from Sempebwa was due to expire.

Alibhai denied selling the flats to the tenants, saying he only sold shares of his company RBCL to the interested tenants.

The tribunal told the residents to register with RBCL that manages the flats on behalf of the AgaKhan Ismailia Community to legalize their status in the company as shareholders.

The land under contention has four blocks of flats located on Kibuga block 12, plot 656, along Musajjalumbwa road, which were constructed by the AgaKhan Ismailia Community after signing a 49-year lease with the late Sempebwa in October 1967 at a premium of sh30,000.

The flats are seated on a two-acre piece of land.

RBACL was managing the flats on behalf of the AgaKhan Ismailia Community.

Whereas the Sempebwa family wants to repossess the land after expiry of the contract, the flat occupants claim they bought the flats and therefore should be granted the opportunity to renew the lease.

The Musajjalumbwa village is a designated polling center by the Electoral Commission, inhabits Ugandan-Asian community, Somalis and indigenous Ugandans who have lived with their families for over 25 years.

This follows a longstanding land ownership dispute over who should get the new lease from the administrators of the estates when the lease expires in October this year.

Another school closed over indiscipline