Cancer patients to leave for Nairobi in tw...
Next Story

A new way to shield Africa against malaria

The new net is being developed at the Institute of Tropical Medicine at Nagasaki University.

The new net is being developed at the Institute of Tropical Medicine at Nagasaki University.

Researchers have developed a new kind of mosquito net that could help reduce the spread of malaria in Africa especially in the areas around the Lake Victoria basin.

Unlike the old type where a person has to spread on top of the bed, the new model is to be fixed in the roof such that it is not removed whenever the person feels like.

This was revealed to a group of journalists on a press tour to Japan courtesy of Japan International Cooperation Agency (JICA).

The new net is being developed at the Institute of Tropical Medicine at Nagasaki University, in Nagasaki Prefecture at the far west end of Japan.

Osamu Kaneko, the vice dean at the institute, said they decided to develop a new type of mosquito net because it was discovered that the people were misusing the old type.

"In one of our pilot studies in Kenya, we discovered people were using nets for fishing, sheltering chicken, covering grass-thatched huts and many more. This was because people were not seeing any value in having to tie the mosquito net every night as they went to sleep and it was burdening.

"In the process they ended up using the net for a wrong cause. That is why we developed a new form that is fixed on the roof and it is properly treated with insecticide that can last up to eight years," said Osamu.

The new mosquito net can be removed from the roof and after washing, it's then fixed.

"I believe this is more convenient and I know people will embrace this when we finally complete our study. We are currently trying the effectiveness of the nets in Kenya and after everything is finalized, they will be ready for everyone."

Prof. Noboru Minakawa, a medical entomologist, explained that in the pilot study of the new mosquito nets' effectiveness, they fix the nets in the roof top and they cover the sleeping area right from the roof.

"Malaria is responsible for a huge burden of death and disease in large areas of the tropical and sub-tropical world. Unfortunately, those countries hardest hit by the disease are often amongst the poorest. Despite continuing efforts, there is still no effective vaccine against the disease." 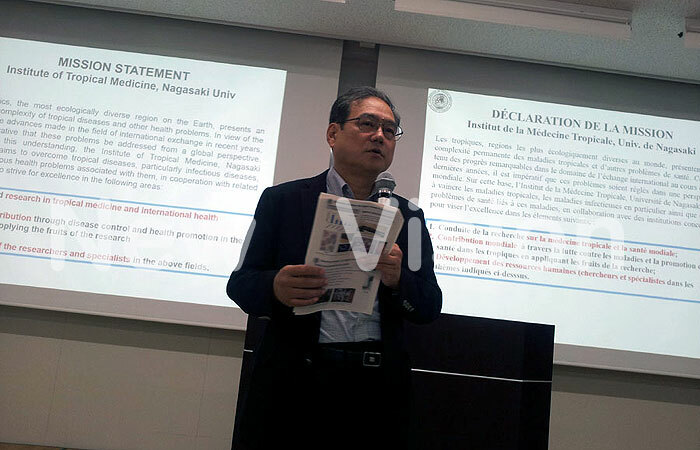 In order to design and implement effective disease intervention strategies, he said, one of the key priorities in malaria research should be the strengthening of understanding of the basic biology of the parasite.

"We are currently investigating some fundamental aspects of the parasite's life cycle, such as the mechanisms behind red blood cell (RBC) invasion and the phenomenon of cytoadherence of parasite-infected RBCs using human malaria parasite plasmodium falciparum and rodent malaria parasite," said Minakawa.

About 3.2 billion people - nearly half of the world's population - are at risk of malaria.

In 2015, there were roughly 214 million malaria cases and an estimated 438, 000 malaria deaths. Increased prevention and control measures have led to a 60% reduction in malaria mortality rates globally since 2000.

According to the malaria indicator survey of 2014/2015, malaria remains one of the most important diseases in Uganda, causing significant morbidity, mortality and negative socio-economic impact.

Children under the age of five and pregnant women are at high risk because of low immunity against the disease.  Hospital  records  suggest   that  malaria  is  responsible   for  30  to  50% of   outpatient visits, 15 to 20% of admissions, and  9 to 14% of inpatient deaths.

Blick and Yasser take their classroom fight to Busiika track