In a shocking story, some MPs paid a conman to help them lobby for ministerial posts. We give you the names. Find out who this crafty Ugandan is and where he works to have been able to fool the MPs? Also, find out how much the MPs lost in the bogus deal. New Vision has all the embarrassing details.

Read about the dramatic shooting of a man who tried to grab a gun from a Police officer in Kampala. Was he on drugs or insane? Get what the Police have so far found out about this daring man.

Find out why the Nakawa Chief Magistrate has decided to visit Kizza Besigye in Luzira Prison next week. Do not miss the details inside.

Do you know how many districts are stuck with faulty X-ray machines, and others which lack chemicals for processing the films? Get the grim story in the New Vision. 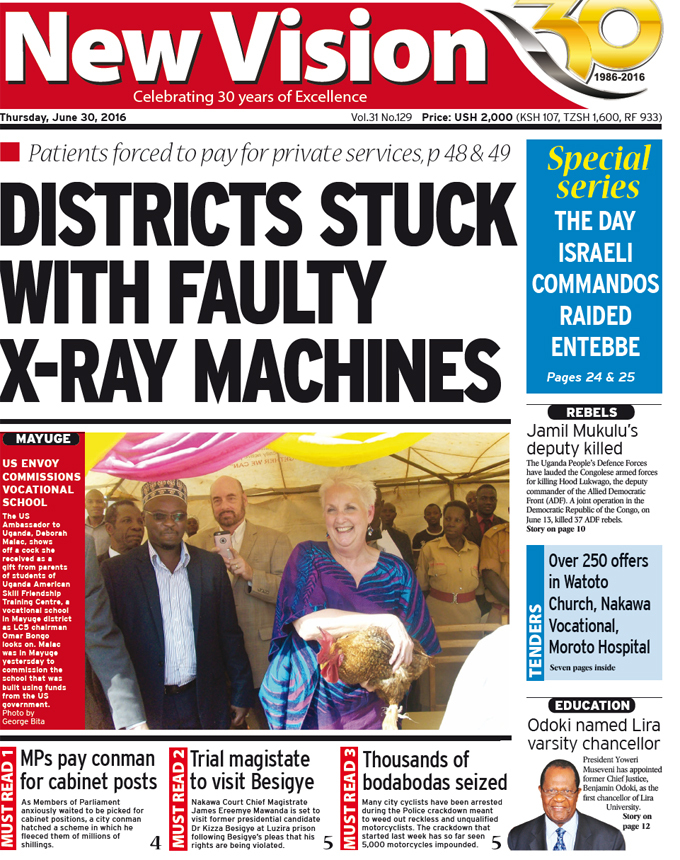 The DPP has dropped charges against a university student who accused a Catholic priest, Fr Jacinta Kibuuka, of threatening her and demanding sex. Get a copy of the New Vision to know more.

The body of former foreign affairs minister Wanume Kibedi has finally arrived home. Get the burial arrangements inside.

Read the detailed story on how rebel leader Jamil Mukulu's deputy was killed in a fresh assault on ADF rebels in Congo. New Vision analyses the likely impact of his death.

A Ugandan has won a global award for his effort to eliminate hunger and malnutrition. Find out what he did and how did it to deserve an international award.

Get the reasons for the post-election conference which has been scheduled for MPs.

Museveni appoints four ministers to help Speciosa Kazibwe campaign for Africa's top seat. We have the details on how they will assist the former vice-president to get the African Union top chair.

UPC wants cooperative unions revived. The party says how this can be done. UPC explains what cooperative unions are and how they used to benefit the people. But is it possible to revive them and are they viable anymore? Read the story and decide for yourself.

We bring you a story on why the reopening of Mulago hospital has been delayed for seven more months.

An 18-year-old boy will be able to see in seven days after 10 years of blindness. It will not be through a miracle but a medical operation. He talked to the New Vision about his excitement and what he what he wants to see for the first time in 10 years? Do not miss this great story inside.

In Busoga, the Kakira Sugar Works boss, Kamlesh Madhvani, has blamed the current food shortages in the region on the mushrooming sugar factories. But he owns the largest sugar factory in the country, so why is he blaming others? Get his explanation and what he thinks should be done to avert a food crisis.