Israel's Prime Minister Benjamin Netanyahu is due to visit Uganda for the anniversary.

Israel's Prime Minister Benjamin Netanyahu is due to visit Uganda for the anniversary.

Skimming above the choppy waves through the dark the four planes swooped in low over Lake Victoria, packed with over 200 elite Israeli commandos on a daring raid to free hijacked hostages.

Landing soon after midnight at Uganda's Entebbe airport on July 4, 1976, it took the paratroopers less than an hour to storm the base and free over 100 passengers aboard an Air France plane, an operation that has gone down in special forces legend. The plane had been hijacked a week earlier on June 27.

Four decades later, Israel's Prime Minister Benjamin Netanyahu is due to visit Uganda for the anniversary not only to mark the operation and boost now-friendly ties between Uganda and Israel, but also to pay a deeply personal tribute.

The commando leader, the only Israeli soldier killed in the raid, was his older brother, 30-year old Lieutenant-Colonel Yonatan Netanyahu.

As an operation, it was "a difficult one", remembered Amir Ofer, then a sergeant major and now a businessman, visiting Uganda earlier this month as part of preparations to mark the anniversary.

Uganda and Israel are planning the memorial to be one of reconciliation, preserving the bullet scars in the walls of the old terminal at Entebbe, still the airport for the capital Kampala, some 40 kilometres (25 miles) to the north. 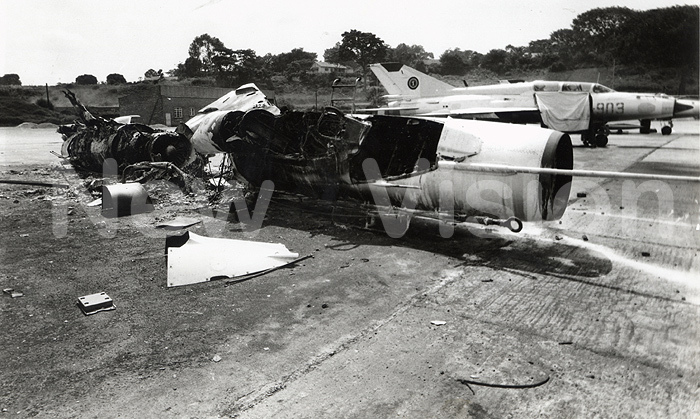 MIGS destroyed during the raid by Isreal commandos

Earlier this month, some of the retired commandos who took part in the raid visited the scene of the extraordinary rescue, standing alongside Ugandan officials, including the son of their then enemy, dictator Idi Amin.

"We had short time to prepare for it," said Ofer, noting the more than 3,500 kilometres (2,200 miles) between Uganda and Israel, with a 48-hour ultimatum before the gunmen would start killing hostages. "The clock was ticking away after the terrorists gave their ultimatum."

An Air France plane en route from Tel Aviv to Paris had been hijacked by two Palestinians and two Germans in Athens, and ordered to fly to Entebbe with 250 passengers aboard.

Uganda's Amin, who had cut ties with Israel in favour of cash handouts from Libyan dictator Moamer Kadhafi, allowed the hijacked plane to land.

On arrival, Jewish and Israeli hostages were separated and others freed, leaving about 100 hostages and crew members guarded by the hijackers.

Neither the hijackers nor Ugandan troops ever expected special forces could stage a raid from so far away, taking the airport by complete surprise.

"We fanned out without any one realising that we were an enemy force," Ofer said, describing how they rushed out of the plane after touching down in the dark. The initial force roared out of the plane in a black Mercedes that looked like Amin's personal car, but their cover was blown when they had to shoot a Ugandan guard.

"Within minutes of our arrival, we were able to arrive at the terminal, killed the terrorists and within an hour we were on our way back to Israel," Ofer added.

All but three of the hostages were freed in the raid while 20 Ugandan soldiers and seven hijackers were killed, along with several Ugandan citizens.

One other hostage, a 75-year-old Israeli woman who had been transferred to a hospital, was subsequently killed on Amin's orders. 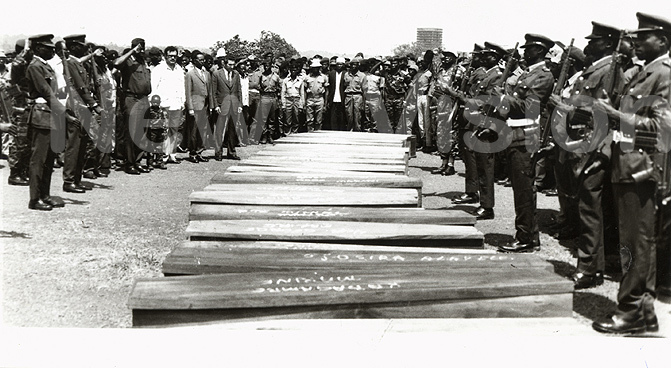 Prayers were held for the soldiers killed in the raid. President Idi Amin was there

Enemies in 1976, the raid today is hoped to help build ties between the two nations.

The raid "will forever remain at the heart of all those that got involved," said former Israeli sergeant-major Alex Davidi who also took part in the raid.

Bonifence Byamukama, from the Uganda Tourism Board, said they were "working on a monument in order to preserve the history" of the operation, including the bullet scars in the walls.

Netanyahu's planned trip, the first by an Israeli premier to Africa since Yitzhak Rabin visited Casablanca in 1994, is a culmination of years of rapprochement and is hoped will boost links with African nations, particularly on security issues.

Galvanised by a growing demand for Israeli security assistance and his government's search for new allies, Netanyahu has put a fresh focus on improving ties on the continent.

Amin's son Jaffar, a 10-year old boy when the raid took place, welcomed the commandos to Uganda this month as a "sign of reconciliation", remembering the stories his father told after he was deposed and forced into exile.

Amin, whose eccentric eight-year regime helped his name become a shorthand for African dictatorship and violent misrule, said he had been "close" to the soldier who shot dead Yonatan Netanyahu.

The officer, named as Captain Rafael Osacha, reportedly died quietly in retirement in the 1990s.

Jaffar recalled what his father had said when he asked why he had not sent fighter jets to shoot down the departing Israelis.

"My father said of the Israelis, 'Son, those are the children of God, when they start to fight, they never stop,'" Jaffar said.

"To him, he felt they had come to rescue their people, they had accomplished their mission, so he let them go."