Sickle cell prevalence at national level stands at 13.3 percent trait and the disease burden at 0.73 percent.

Sickle cell prevalence at national level stands at 13.3 percent trait and the disease burden at 0.73 percent.

KAMPALA - The Government of Uganda has opened a sickle cell clinic at Bundibugyo Hospital in Bundibugyo district to help curb the high prevalence rate of the disease in the district.

Bundibugyo is among the high burden districts with a prevalence of 21.7% of trait and 1.9% of disease. In every 100 people in Bundibugyo, 22 have got sickle cells trait.

However some districts have prevalence above 47 percent, they include Gulu, Kampala, Lira, Jinja, Tororo, Masindi.

Speaking during the World Sickle Cell Day celebrations that were held in Bundibugyo on Monday, Sarah Opendi the state minister for health general duties noted that the clinic has been long overdue.

"The clinic will start with immediate effect; it will be screening both children and old.  This should have been established here earlier but you know this disease is among one of the neglected diseases in the world, but now we are awake," Opendi said.

In Uganda, 15,000 to 20,000 babies are born with sickle cell disease annually and 80 percent of them die before making five years.

According to the ministry of health, sickle cell prevalence at national level stands at 13.3 percent trait and the disease burden at 0.73 percent.

Opendi challenged Ugandans to embrace early screening of the disease and follow the advice given by health workers.

"If you find you and your partner have sickle cells do not produce, if you have already produced and you are lucky the child is not having the disease stop, and for those who are already affected follow medical advice."

She challenged couples to always be screened of the disease before agreeing to produce children.

"Sickle cells can be prevented. It has no cure and its treatment is very expensive so let us embrace preventive measures," Opendi said.

Bundibugyo has for long been known to have a high burden of sickle cell dieseas since a study conducted in 1949 which put the trait among the Bamba in Bundibugyo at 45 percent.

"Treatment can cost up to shs 30 million, and there are few Ugandans who can afford this. It is therefore incurable in Uganda."

Several people turned up for the function and were screened of the disease.

Clevin Tabilihangi a mother of six noted that her last born has a got sickle cells disorder which she said is a big challenge to the family.

"My son is 13 years; he was diagnosed with the disease at the age of three. But this disease is very devastating. It is frustrating his studies and his life. As a family we have spent all our money trying to treat this child," Tabilihangi said.

She spends most of her time going to hospital to get treatment for his son. 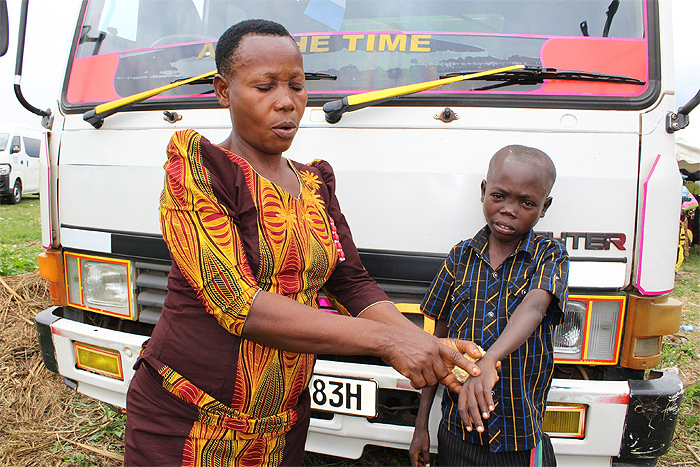 Clevin Tabulihangi with her 13-year-old son is having sickle cell. (Credit: John Nzijah)

Tibilihangi is not alone several parents are struggling to take care of their children spending every coin to treat the incurable disease.

Stephen Aguma notes that the money he has spent treating his 12 year old son is morethan what one can pay for tuition at Makerere University.

"It is very expensive, buying drugs all the time, transport costs to health facilities. I tell you it costly than paying school fees for a student at Makerere," Aguma said

This is what almost every parent or family with sickle cell child goes through. It is always a painful moment according to the parents.

Sickle Cell disease if one of the most common inherited diseases worldwide and pain is the most important symptom of the disease. The pain is often described as deep, distressing and aching.

Josephine Babungi, the district Woman MP challenged Ugandans to donate blood which will help the affected people have better life.

"Many of our colleagues frequently need blood. This blood can only be voluntarily got from me and you I call upon you donate it to them," Babungi said.

She also urged government to increase on funding to lower health facilities in order to have services reach the people.

Christopher Kibanzanga, the state minister for agriculture urged the community not to stigmatize the affected people but offer them care and support.

"Let us not victimize or get tired of taking care of our children even though there is no cure. I know God will pay us for doing good things," Kibanzanga said.

With few screening centers and little knwolegde about the disease, sickle cell remains one of the biggest health burdens the government of Uganda must address.