The colorful event was held at the Kingdom administration block at Mucwa.

"I warmly welcome all the clan representatives that have been elected to the Kingdom supreme council" King Oyo said in his first address to the Kingdom Parliament.

The King tasked the newly sworn in members of the Kingdom parliament to be united and work for a common cause of developing the Kingdom.

"As legislators it's your responsibility to ensure that Toro makes progressive development in development education, agriculture, unity and peace" the King stated. 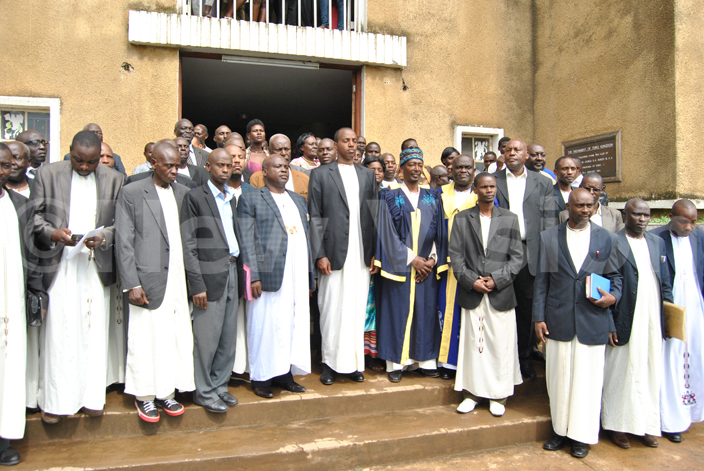 King Oyo in a group-picture with members of the new-Kingdom parliament.

He added that "it's your role to ensure that all the kingdom assets are retuned from the Central government to benefit the people of Toro".

The kingdom Prime Minister Bernard Tungakwo warned the new members to the Kingdom's supreme organ against being misled or corrupt but to always work towards conserving and protecting the dignity of Toro.

"As clan representatives you should be accountable and trust worthy to the people of Toro. Love your Kingdom and always deliberate on development not individuals" Tungakwo said.

The Prime Minister said that the Kingdom is going to use the already available resources to fight against poverty amongst the citizens of Toro.

He also appealed to them to be responsibly monitor all Kingdom projects in their areas of jurisdiction.

Soul Mugasa was elected unopposed as the kingdom speaker. He will be deputized by Silver Kasoro.

Speaker Mugasa emphasized the need of bringing on board other interest groups in the Kingdom that are not being recognized by the 1999 kingdom constitution.

"Your majesty for proper representation of your subjects, there is urgent need of bringing on board other key players in the Kingdom which the current kingdom constitution does not recognize these include religious denominations like the Pentecostal Churches and the Faith or Unity" Mugasa.

Mugasa also tasked that the county chiefs to operationalize all the kingdom's lower structures.

"In this new term of office the Kingdom will not tolerate lazy chiefs who do not hold meetings at county and sub county levels" Mugasa said.

Poaching: The hunted to turn hunter