Day of the African Child

Children such as these need the the law to protect them

In March, Uganda approved a new comprehensive children's law that moved beyond covering the basic rights of children to giving children fundamental rights meant to further protect them.

According to Martin Kizza, the executive director of the National Council for Children, the old law only covered basic rights such as access to education, food, shelter and healthcare, but now it gives a child civic rights.

A child can participate and influence laws protecting them. This came just before the commemoration of the day of the African Child. It has been celebrated on June 16 every year since 1991, when it was first initiated by the Organisation of African Unity (OAU) now African Union (AU).

The day continues to be marked in honour of those who participated in the Soweto uprising in 1976. School children in South Africa protested against apartheid inspired education resulting into public killing of the unarmed young protesters by police officials.

But the day also raises awareness of the situation of African children and the continuing need for improvement of education.

The national theme for this year's commemoration is Protecting Children's Rights, a Call to Action. Masaka district will host the celebrations at the Liberation Square.

The decision to mark the event in Masaka is to create awareness and highlight the challenges of early marriages and child sacrifice which is rampant in the district. Kizza says at least 33% of children aged between six and 12 years drop out of school before completing studies.

He adds that 60% of teachers are not teaching, while 29 % are in school but not in class. In addition, child abuse still persists in Ugandan schools and violence in schools is still existent, but Kizza says the new law will weed them out.

The new law is the Children's (amendment) Bill 2015 approved in March was proposed by Bernard Atiku, the Ayivu County MP. It now replaces the old law, the Children's Act, 1997, which focused on the basic needs of the child.

The revised children's law now gives children more care and protection. It protects children from abuse and exploitation. The law also protects a child from harmful customary practices such as child marriage and female genital mutilation.

It further protects a child from harmful employment such as work that exposes a child to physical, psychological and sexual abuse and working among dangerous heights and with dangerous machinery.

According to the new law, a child can only start paid work at the age of 16. Children are also protected from violence under the law as it provides the right to access child protection services and addresses issues such as sexual abuse and exploitation, child sacrifice, child labour, child trafficking and institutional abuse of children.

When it comes to care, someone else will be allowed to adopt a child only if there are no relatives willing to look after that child and other care options have been exhausted in the country. Non Ugandans can only adopt a child after that.

They will have the child in temporary care for at least 12 months and the adoptive parents must provide periodic reports on the child. An adoption agency is to be created to handle adoption applications.

Inter-country adoption is to be a matter of last resort after other alternative care options have been exhausted. It also lists the offences of an administrator of the estate of a child to ensure that children's property is not abused.

The new law also prohibits the death sentence for a person below 18 years and adults whose offence was committed below the age of 18 years.

It equally stops corporal punishment in schools. Breaking this law attracts imprisonment or a fine not exceeding two million shillings. "The new law is fantastic. Do it wrong and you get charged. I am happy that the Government is checking and protecting the child. Some people have hidden motives, especially when it comes to adoption," Kizza says. He adds: "The Day of the African Child is for all stakeholders to take stock, look at gaps and improve on children's protection."

Kizza says it is common knowledge that despite having good laws, enforcement in Uganda is usually the main challenge.

"We are very strategic on implementation this time round and are processing guidelines to implement this law," he says.

Kizza says local governments, which will be charged with implementing the law, will have performance assessment manuals that will be reviewed regularly. "How you have implemented the law will be looked at, if poorly as a local government you will be penalised," he says.

Kizza encourages parental responsibility. He says parents should be aware they have the first role to play even with the children's right in place.

"We have produced a bulletin that shows the key aspect of the law; one part highlights the parents' role," he says. "We are not creating a rebellious generation. We have started with the central region to teach children their responsibility, including staying in school and respecting parents," he adds.

Rebecca Nabossa, a counsellor with Naguru Teenage Centre, says parents must keep explaining situations to children so that they understand their rights and do not misuse them.

In the run-up to the Day of the African Child, NCC and other stakeholders organised a national children's conference during which 110 children from across the country gathered to brainstorm on matters affecting them.

They developed a position paper to be presented to government leaders for action. Post commemoration activities will include orienting a Member of Parliament on who a child is and to sensitise them to support children.

Kizza says the theme hopes to create awareness and bolster support for matters related to children. The Day of the African Child 2016 on the continent is observed under the theme: Conflict and Crisis in Africa: Protecting all Children's Rights. 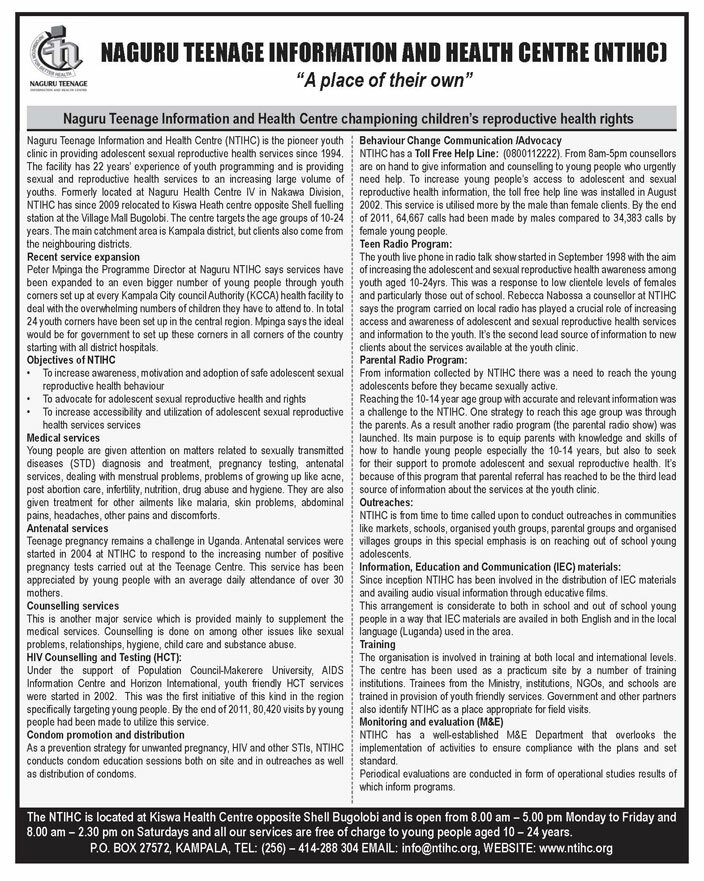