The Catholic Church in Uganda has released the Pope Francis letter "Amoris Laetitia" which means the joy of love.

Releasing the letter, Blume said that "the joy of love" is a pastoral document inspiring and encouraging the Christian faithful by assisting them to understand, appreciate and live the vocation of marriage and the family in the spirit of love, peace and joy amidst their challenges.

He said that Pope Francis calls upon couples to form consciences and not replace them as challenges pastoral agents to contextualize and re-examine some of the approaches used that he describes as inadequate for the experience of marriage and family today.

"This document as the Pope himself states seeks to encourage everyone to be a sign of mercy and closeness wherever family life remains imperfect," Blume said.

He said that Pope's letter underscores the virtue of love as fundamental for a meaningful and lasting marriage and family life.

He said that on his pastoral care towards families Pope Francis highlights the roles and clerics and parents as well as the rights of children while emphasizing marriage and family as the first environment for experiencing relevant education and socialization.

Blume warned Ugandans against copying European cultures which he said l destroy their marriages.He added that importance and beauty of the family and marriage based on mutual love, more pastoral kindhearted approach to individuals, couples and families who find themselves in difficult and irregular situations, overcoming the temptation to just judge and condemn them, call for personal judgment in the light of the word of God, guidance of the church so that the faithful may decide in conscience and take the right decision. 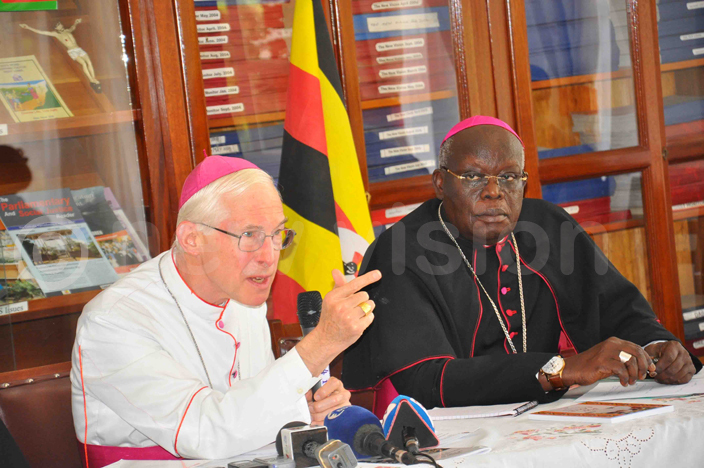 However, Archbishop Odama stated that the challenges and know-hows for the families are migration, unemployment, pornography, abuse of minors, lack of respect for elderly, anti-violence, individualism, poverty, cohabitation, prostitution, abortion, abuse of the dignity and rights of human person, alcohol, ideological denial between wife and husband.

Although, the archbishop Lwanga said that abuse of the dignity and rights of human person by individuals and some cases by those in authority is the cause of most of challenges in families in Uganda.

He added that lack of proper parental care, guidance and education of children, as parents and families have relegated their roles of parenting, and unsuitable use of technologies also has led to increase in people and children accessing pornographic material, prostitution, drug abuse, and other life styles detrimental to the institution of marriage and the family.

Lwanga said that inconsistency between the faith professed and the daily life of many Christians who continue to live a double life which is evident in polygamy, adultery, cohabitation, and fornication.

"Ensure by the help of Pope's letter of love, utilize the media to propagate the church teaching on marriage and family it will assist youth and people to understand live their sexuality as a gift and responsibility according to the plan of God," Lwanga added