US agency endorses plan to cede Internet o...
Next Story

Thefts of the popular motorcycle taxis, commonly referred to as boda boda is one of the notorious crimes in Uganda.

In 2014, Uganda Police investigated 214 cases of aggravated robbery of motorcycles, according to the Annual Crime Report for 2014.

And those figures are just for the motorcycle owners that report the theft of their bikes to Police.

Kato Richard, a telecommunications engineering graduate from Makerere University wanted to help boda boda owners track down their motorcycles once they have been stolen.

"One of the most attractive items to thieves in Uganda is the boda boda bike. Two years ago, I carried out a market survey, we spoke to boda boda people and we came up with a solution to track their bikes," he says.

Kato develop a solution, where a tiny Global Positioning System (GPS) tracker installed on a bike. This tracker is then synched with mobile and web-based applications. So if you are boda boda owner, you can see in real time, where your motorcycle is at one particular time by clicking on an app on your mobile phone.

For clients who do not have access to the internet, the solution provides for the use of the SMS.

After designing the system, Kato entered a deal with a Hong Kong based company to supply him the small trackers that he uses today at his start-up company, JERM Technologies.

"There are some general purpose trackers on the market, but what I went for was a more customized one. One with a longer battery; one that is small enough to be hidden in a bike," explains Kato, who is also currently pursuing a masters in power systems engineering degree at Makerere University.

How the solution works

Position of the GPS tracker on the bike is so random to make it difficult for a thief to disable the device.

"The chip uses the Google maps coordinates and returns them to our server, and then we relay that to the client's device," explains Kamya Henry, the lead Information Technology support engineer at JERM Technologies. 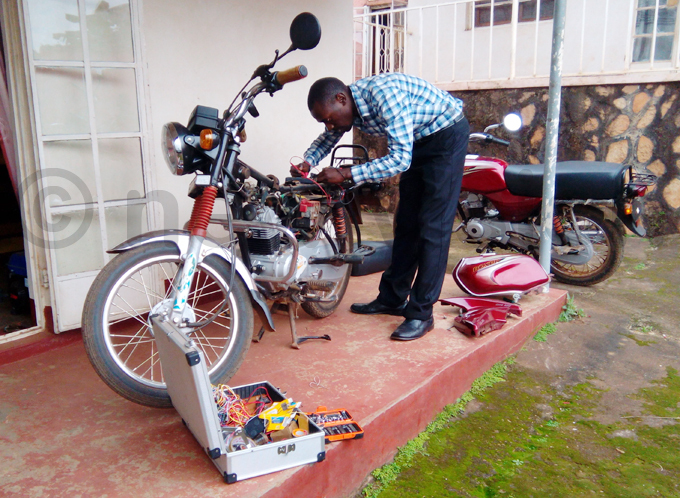 Kamya installs the tracking system in a boda boda. Photo by Billy Rwothungeyo

"Every bike has a key assigned to the starter. The moment another person tries to unlock the bike, the system will notify you."

The system also comes in handy if you want to track the movements of your bike. This tool, Kamya says is popular with owners who give other people to ride their bikes.

"You may tell your driver that your bike should only operate within Kampala. The moment he goes beyond the boundaries of Kampala according to Google Maps, you are immediately notified," explains Kamya.

Already 50 boda boda owners are on board, and Kato says they are only getting started. When New Vision visited JERM Technologies offices in Mengo, two bikes were being fitted with the tracking system.

"One of our clients lent out his bike in Kampala. The person who borrowed the bike turned off his phone, and he parked the motorcycle for over a month. When the battery went off, the tracker also went off, but as soon as he turned on the bike, the system got back on, and we tracked him down.

Kato, who turns 28 in October, says since his start-up is small, he is heavily counting on referrals from motorbike owners who are already hooked onto the service.

Installation fee, inclusive of the device, is sh200,000. Then one has to part with sh20,000 every month, which Kato says is used to maintain the servers.

Kato is using the same idea to develop tracking systems for vehicles, and even for boats on Lake Victoria to curb illegal fishing among others.