The women targeted in a 'black-market baby scam'

"They were unwed women, vulnerable. And the hospital exploited them, offering them secrecy in return for the newborns."

Newly born babies lie in a maternity ward at a government hospital in Gwalior. Police fear staff at the private Palash Hospital were selling babies for as little as 100,000 rupees ($1,500), with agents convincing unmarried mothers to give birth at the facility and then abandon them. (AFP)

"They were unwed women, vulnerable. And the hospital exploited them, offering them secrecy in return for the newborns."

In an intensive care unit, a nurse soothes a crying baby rescued in a raid on a private Indian hospital that police suspect was selling abandoned newborns on the black market.

"She is too weak and needs special care," the nurse said, patting the girl born underweight and premature and receiving treatment at another hospital, run by the government.

"I pray a nice couple adopts her and raises her like their own," the nurse said in the central city of Gwalior.

Police fear staff at the private Palash Hospital were selling babies for as little as 100,000 rupees ($1,500), with agents convincing unmarried mothers to give birth at the facility and then abandon them.

"Their agents meticulously went about searching for pregnant woman who wanted to abort but instead were convinced to give birth," police superintendent Kumar Prateek who led last month's raid and investigating the case told AFP.

"They were unwed women, vulnerable. And the hospital exploited them, offering them secrecy in return for the newborns," he said of the stigma attached to unmarried mothers in socially conservative India.

Police say they have traced five babies born at the now-shuttered Palash -- located just across the road from the government hospital in Gwalior -- and sold illegally to couples in different cities.

However investigators fear the total number could be much higher, with hospital records showing more than 700 babies were delivered there in recent years.

Experts say stealing and selling babies to couples is not uncommon in India, even directly from hospitals where doctors and nurses are sometimes involved in handing them over to criminal syndicates.

But investigators say this was unusual in that agents targeted pregnant women who agreed to check into the facility and go through with the scam.

"Unlike female foeticide and illegal abortions, which are major problems for us, the live births happening at the hospital never raised any suspicion," Anoop Kamthan, Gwalior's chief medical officer, told AFP.

"Mothers were willingly abandoning their babies," he said.

Police were tipped off by a former disgruntled worker, leading to the raid and arrest of two senior hospital officials. 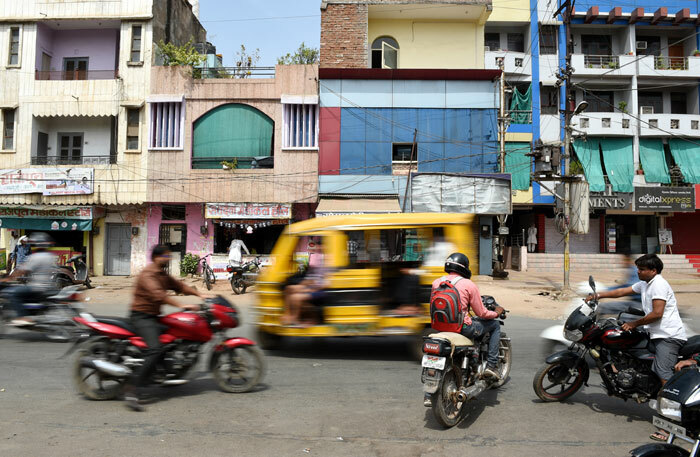 A general view of the now-shut 30-bed Palash hospital (with blue glass)located just opposite the city's main government hospital in Gwalior. (AFP)

Taposh Gupta, hospital director and one of those accused, insists he is innocent of any wrongdoing, pointing the finger at his staff.

"I don't have any knowledge about it. My manager was in control of the adminstration and I am now hearing some eight to nine months ago they sold one or two babies," Gupta told AFP, while in police custody.

Gupta and another face initial charges including of slavery, as police try to piece together details of the racket.

Gupta says he too adopted one of the babies born at the hospital, but stressed that he went through proper legal channels.

Activists say blackmarket adoptions are common in a country with high levels of trafficking of women and children, although there are no official figures.

"We have examples of newborns being fraudulently declared dead and later sold for adoption. These are well-oiled networks spread across the country," said Anjali Pawar who works for international NGO Against Child Trafficking.

Some parents turn to the blackmarket because of the lengthy and frustrating process of legal adoption that has long involved endless red tape, according to experts.

Prime Minister Narendra Modi's government has overhauled the process since coming to power in 2014 in a bid to make it easier and faster, and boost traditionally low official adoption levels.

Some 3,000 legal adoptions took place in 2015, according to government figures. 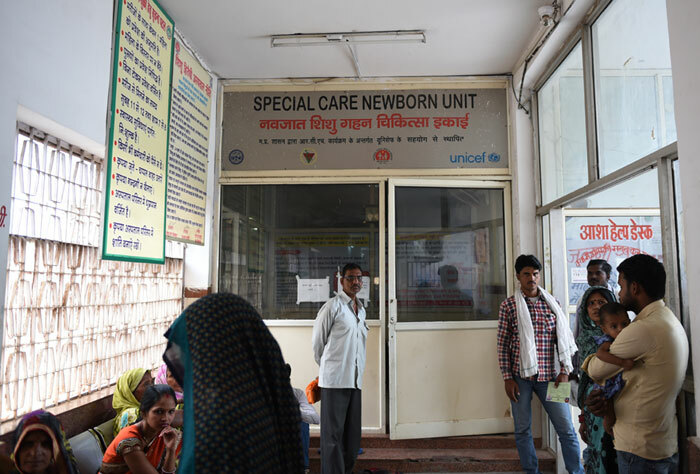 Indian bystanders gather outside a special care newborn unit at a government hospital in Gwalior. (AFP)

'With love and care'

Investigations so far have discovered that the hospital was getting about 100,000 rupees from childless working and middle class families who were desperate to start a family.

One couple say they are devastated after discovering from police that their adopted baby is one of those involved in the hospital scandal. They refused to give details of how they adopted the newborn, but insisted they thought they were acting legally.

"We followed all the procedures and adopted the newborn. They took some money on pretext of documentation and it all looked clean," the father said on condition of anonymity.

"We were raising the child with love and care. Just like we would have raised our own," he said, adding that they opted for adoption after five years of trying to conceive.

The couple are in danger of losing custody as police attempt to track down the baby's birth mother and mull sending the infant to an orphanage.

Back at the intensive care unit in Gwalior, nurses are closely monitoring the one-month-old after another baby, a boy, from the raided hospital, died of unknown causes.

Once strong enough, she too will be sent to an orphanage.

Prioritise anaesthesia on the health agenda