Uganda has potential to develop faith based tourism

Ugands's motto ‘For God and My country' is a testimony of the importance of faith in the cultural, economic and political life of the country.

Uganda is religiously diverse with Christianity and Islam as the dominant religions. At the core of their birth and growth are religious sites.

Over the centuries followers of different sects have made pilgrimages to religious sites. In the biblical times, people travelled to Jerusalem for the Passover festival.

History indicates that the first pilgrimages were made to sites connected with the ministry of Jesus. Those that followed were made to Rome and other sites associated with the apostles, saints, Christian martyrs and places where there had been apparitions of the Virgin Mary.

The Namugongo martyrs shrine is one of the sites for religious tourism in Uganda which attracts people from different parts of the world to learn and pay tribute to the martyrs who were killed by Kabaka Muwanga of Uganda.

For the past years, the biggest number of pilgrims came from Kenya, Tanzania, Rwanda and Democratic Republic of Congo according to Fr. Joseph Mukasa Muwonge, promoter of the devotion to the Uganda martyrs at the Uganda Martyrs Namugongo shrine.

He says that the site receives approximately two million pilgrims on the third of June annually.

The world's largest form of mass religious tourism takes place at the annual Hajj pilgrimage in Mecca which attracts about two million pilgrims annually and about 14 million people in the city.

With the number of pilgrims and visitors, the global economy can no longer ignore their contribution to tourism.

Siima Simon Peter a tour and travel consultant at Prime Safaris & Tours Ltd defines religious tourism as faith based travel by individuals and groups. Most people pay pilgrimage to sites at the center of their faith for spiritual cleansing and material blessings though religious tourism may go beyond pilgrimage to incorporate missionary work and religious conventions.

"For example, Anglicans and Catholics trek from different parts of the country and the region on every 3rd June to follow the footsteps of the Uganda martyrs, commemorating and emulating their profound faith. They feel like if they do so, they will get an opportunity to reach the Namugongo Martyrs Shrine site and a sense of cleansing and remarkable blessing will be upon them," he says.

He observes that with religious tourism, pilgrims are determined and cannot easily be deterred from their purpose unlike wildlife tourism with comprises visiting national parks.

"It can be risky sometimes, for example with huge crowds involved or the Kaaba of Mecca but people would rather die at the sites in quest of their lifetime spiritual fulfillment," he says.

Indeed, during the INDABA annual tourism expo held in Durban South Africa in May, Stephen Asiimwe the Chief Executive officer of Uganda Tourism Board stated that;

"The uniqueness about faith based tourism is that it is an emotional activity and people do not need a lot of convincing. People will go for religious pilgrims in Israel even when bombs are falling around."

However aside from the pilgrimages, Siima says that people visit religious sites for educational and research purposes.

Muwonge clarifies that besides June 3, the Namugongo shrine receives 10,000 visitors throughout the year with the majority coming from Kenya. 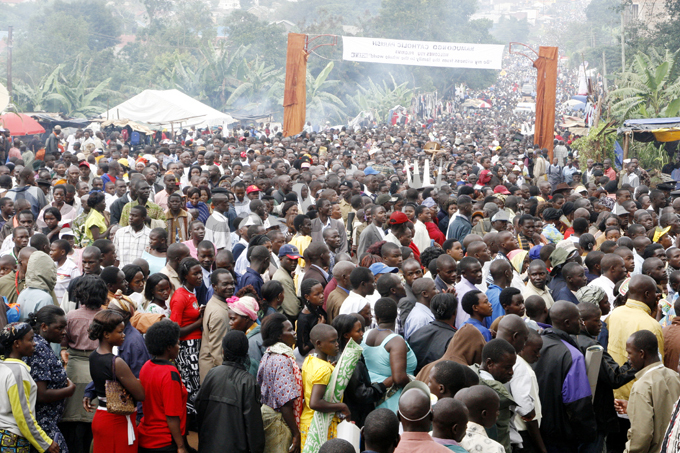 "Usually we organize a session of prayer then take them on a tour of the shrine and explain to them the significance of different objects," he says.

Visitors usually depart with souvenirs from the bookshop and the most purchased items are books, rosaries and documentaries.

Nonetheless, collective statistics of how many religious tourists visit the country are difficult to find due to poor documentation.

"It is hard to quantify the number of pilgrims and visitors that come to Uganda because many faiths do not keep record of them," Vincent Mugaba the public relations officer at Uganda Tourism Board (UTB) says.

"In addition, many of the tourists who visit the different religious sites often have come for a wildlife safari, conference, education purposes, business or any other reason and the visit to the religious site is on the to-do-list," he observes.

Why is it important in a country?

Mugaba explains that faith is one of the cords that binds and will keep us as one people irrespective of our ethnic background.

"It does not matter from which part of the country one comes, when together in our places of worship, we all worship together." He notes.

Aside from the binding factor, Mugaba says that religious tourism allows people to travel and see different parts of the country.

"A few days ago I was travelling from Kabale and I was amazed to see many people taking the annual pilgrimage to Namugongo. For many of these, it was the first time to go out of their home areas," he confides.

Notably, the scenery changes all through the whole journey allowing pilgrims to enjoy and appreciate their country. They will be different people if for nothing else, this journey.

For the communities around Namugongo and Kampala, the millions who are camping in the city need to eat, water to drink, clothes, transport back after the pilgrimage and much more.

"These are opportunities for the businesses that provide services and products to meet this new demand," Mugaba notes.

When well developed, the faith- based tourism has a potential of bringing in millions from Uganda's neighbours, other parts of Africa, and the world.

How is Uganda tapping into other resources?

In 2015 UTB trained home owners in the Namugongo / Kiira area so they could turn their spares rooms into accommodation facilities. The board termed these-homestays.

"This kind of arrangement allows the home owner to earn from the spare or unused rooms, while giving the tourist an affordable place to stay. Both then have extra money to spend thus growing the economy in their locality," Mugaba explains.

The traditional accommodation facilities like hotels and guesthouses also benefit from this influx of visitors from outside of Kampala.

A visit to the Uganda martyrs shows external links to nearby hotels and guest houses.

The transport sector right from the boda boda to taxis, buses and planes all benefit.

Presently, UTB is looking at developing new markets in Africa specifically to grow the faith tourism.

"The benefits of faith tourism are both deep and wide; deep in that the proceeds trickle down through the value chain and wide to involve a cross section of stakeholders across the economy and country," Mugaba explains.

"For example when a refreshment company acquires space to sell its products to pilgrims, they will have enough capital to advertise on media platforms. In turn, the media company will use this revenue, to air the program live thereby allowing someone in Butaleja, Kotido, Hoima and Mukarangye to view the proceedings at Namugongo," He adds.

On the ground, the same drinks company will have wholesalers who will give products to retailers, who from their earnings may buy a rolex or take a bodaboda home instead of walking.

How is Uganda developing her potential for faith-based tourism?

Uganda has hosted three different popes on apostolic journeys with the most recent being Pope Francis on 27th November 2015.  Few countries in Africa have hosted the pope even twice and these are Cameroon, Benin and Angola.

Apart from the Namugongo shrine, the country is home to other significant religious sites like the Bahai temple temple of faith- the only one in Africa, Gaddafi mosque- the second biggest mosque in Africa, the Munyonyo shrine, the Polish church in Masindi and Prayer Mountain in Nebbi-the world's smallest church. Others are Prayer Mountain in Seguku, Mackay's cave in Nateete and the historical Rubaga and Namirembe cathedrals.

All these bring in a number of believers from the countries surrounding us. So how does the country plan on building its potential so as to fully benefit from this advantage?

Well, on 16 May 2016, Yoweri Museveni the President of Uganda officially launched three international firms to promote and market Uganda tourism in USA and Canada; UK and Ireland; and Germany, Austria and Switzerland. The firms' specific job is to promote Uganda tourism; see to it that numbers grow, and tourism investments come into the country. Importantly, Faith-based tourism is one of the experiences and products on these firms will be promoting

Siima says that there should be sustainable religious sites' development like setting up information centres, gift and souvenir shops, maintaining the root of the site for example preserving an ancient cathedral other than demolishing it, preserving worship sites of nearly or extinct religions as living museums like the traditional African shrines not forgetting visitor impact management

Muwonge agrees, adding that the bookshop at the Uganda martyrs shrine has a challenge of out of print publications like Ediini mu Uganda by Joseph Eddiba volume one (1955), volume two (1967) volume three (1969) which has the history of Buganda and Uganda as a whole not restricted to the religious aspect. Another book is Obulamu lwa ba julizzi by monsignor Ssemogerere which has two books.

Muwonge adds that religious sites need to invest in social media because people appreciate it more given the dot com era that we live in presently.

"People also need to visit the websites every now and then so as to keep up with the latest developments at the shrine."

Siima also says that the countries in the East African region are joining forces to market the regions as a single destination under the Joint Tourism Marketing Committee (JTMC) and the Uganda Martyrs day is listed as the annual flagship tourism event for Uganda giving religious tourism a credible lift.

Mugaba explains that under this initiative, the three countries have pooled resources to market the different products in each country. Some of these resources are being used to carry out research in other African markets to find out what tourism products can be promoted there for the benefit of the three East African countries.

"Just last week Rwanda tour operators were in the country to understand Uganda better and include it on their itinerary," he says.

Muwonge notes that pilgrims also have a role to play and that is ensuring that they adhere to the instructions of the security organs so that they can have a peaceful time.

Tourism is currently the number one foreign exchange earner for Uganda and faith- based tourism should grow to make its contribution to this.