Al-Shabaab leader 'presumed killed' in US ...
Next Story

The suspected architect of the bloodbath in Garissa was reported killed in a raid in southwestern Somalia.

The suspected architect of the bloodbath in Garissa was reported killed in a raid in southwestern Somalia.

PIC: A car burning after a terror attack at the Ambassador Hotel, after Somalia's Al-Qaeda-linked Shabaab, launched a deadly attack on a top Mogadishu hotel popular with MPs, setting off a car bomb and fighting security forces inside the complex. (AFP)

A senior Shabaab commander suspected of organising the 2015 attack on Kenya's Garissa University has been killed in a special forces raid in southern Somalia, a local official said Wednesday, as the Al-Qaeda-linked group launched a deadly assault on a top Mogadishu hotel.

At least 10 people, including two lawmakers, were killed in the car bomb and gun attack at the Ambassador Hotel, according to medical and security sources, while dozens more were injured.

Fighting between Somali security forces and Shabaab Islamists at the hotel raged into the evening, some five hours after the attack began.

In the coastal Somali town of Kismayo meanwhile, a local security official said the suspected architect of the bloodbath in Garissa had been killed in a raid in southwestern Somalia in the night from Tuesday to Wednesday.

"Sixteen armed men, four of them senior commanders including Mohamed Mohamud Ali known as Dulyadin... were killed by the Somali commandos and the special forces of the Jubaland," said Abdirashid Janan, minister of state security for Jubaland, an autonomous region in southern Somalia.

Local officials paraded the bodies of the four suspected commanders in the streets of Kismayo.

They were slain in their dormitories or rounded up and executed in a hall of residence.

The operation was carried out by four gunmen from the Shabaab, Al-Qaeda's East Africa branch.

It was Kenya's bloodiest terror attack since Al-Qaeda bombed the US embassy in Nairobi in 1998, killing 213 people.

Last July, the Kenyan government said that Dulyadin -- also known by the aliases of Kuno and Gamadhere -- had been killed in a US drone strike, but it swiftly backtracked on the claim.

There was no immediate confirmation of Dulyadin's death from Kenyan authorities. "It happened in an area which is not under our control," Kenyan military spokesman David Obonyo told AFP late Wednesday.

"Da'ud was one of Shabaab's most senior military planners and served as a principal coordinator of (the group's) militia attacks in Somalia, Kenya, and Uganda," Cook told reporters in San Diego. 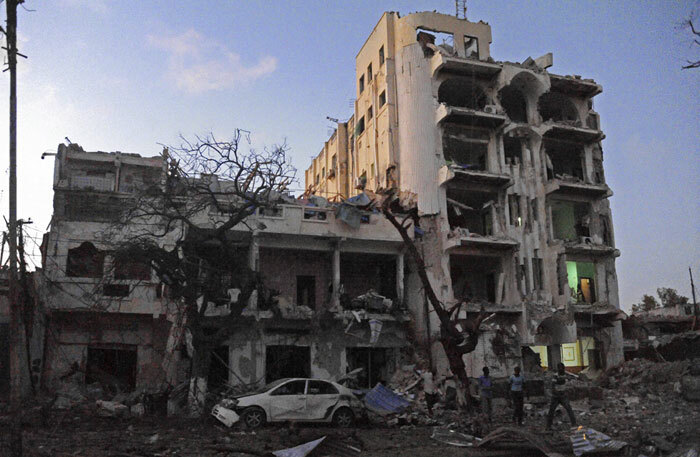 The scene of a terror attack at the Ambassador Hotel on Wednesday. (AFP)

Shabaab fighters were chased out of Mogadishu in 2011 but the group remains a dangerous threat.

It has vowed to overthrow the internationally-backed government in Somalia, which is being buttressed by a continent of some 22,000 troops from the African Union.

It has frequently carried out attacks in neighbouring Kenya and vowed retribution against "Western crusaders" who it says are guilty of offences against Muslims in Somalia.

The Shabaab group was quick to claim Wednesday's assault on the Ambassador Hotel.

"The attack was started with a heavy explosion and members from the Mujahedeen fighters stormed the building," it said in a statement.

"According to latest information received there was a follow-up complex attack and the hotel was penetrated and an ongoing fire fight is in progress," the security source added.

"I was a few metres (yards) away from the hotel when the blast occurred. It was a very heavy one and it destroyed the whole area. I saw the dead bodies of seven people, most of them burned," Mohamed Elmi said.

"The security forces are now inside and the whole area is cordoned off."