The First Son speaks out on the so-called 'Muhoozi Project', leaders warned against dressing shabbily, and plenty more.

The First Son speaks out on the so-called 'Muhoozi Project', leaders warned against dressing shabbily, and plenty more.

Good morning, what's in the paper on this Thursday that's expected to be hot, at least in the capital?

The former MP, who is challenging Oulanyah's election in court, is missing, according to reports. Police and his son have talked to the press. Flip over to page 10 to delve into the details.

One minister who you might have seen a lot more in the news lately is transport and works minister Eng. John Byabagambi. On Wednesday, we had him featured in the commentary section as he was a direct point of reference of columnist Opiyo Oloya's 'Letter from Toronto'.

And today, he is back in the news for pretty much the same subject matter: his work. The minister, in an interview with New Vision, has defended the 9km Kibuye-Busega-Express Highway project, which is going to cost the country sh768b. So why is this road this much a unit of attention? There certainly is one way to find out. Find a whole page on that on page 3.

Meanwhile also another story that has been in our faces lately is of the four Ugandan policemen attacked while patrolling Lake Albert. A team of Uganda government officials have travelled to the Democratic Republic of Congo to discuss the return of their remains back home. That, also in today's New Vision paper. 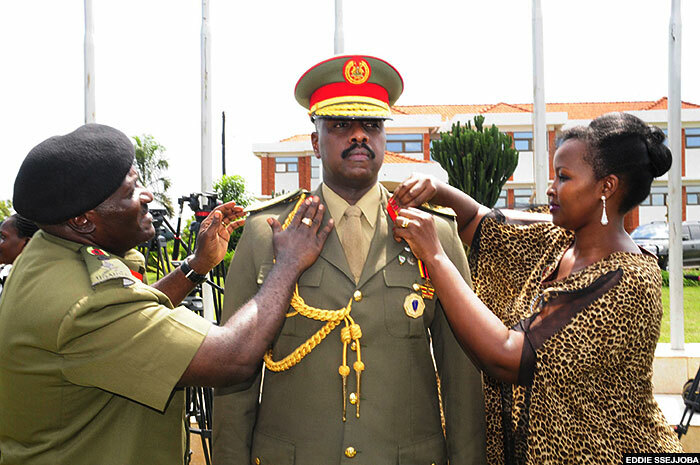 Meanwhile, the commander of the Special Forces Command, Maj. Gen. Muhoozi Kainerugaba, has made it clear he does not harbour presidential ambitions.

Muhoozi, pictured above being decorated by CDF Katumba Wamala and his (Muhoozi's) wife on Wednesday, said he is "happy with being in the military". This, and more from the pipping ceremony, on page 5.


'CHECK WHAT YOU WEAR AND WHAT YOU SAY' 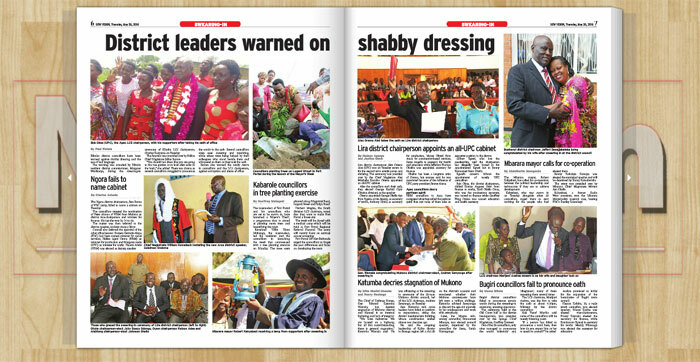 Kibuku district councillors have been warned against dressing shabbily and using foul language. And, Ngora district chairperson, Ben Eumu of FDC party, failed to name a cabinet. 'What's up?' you might wonder. Go to page 6 and 7.

So who is he telling this to? And why? That's one of the stories in our regional section. 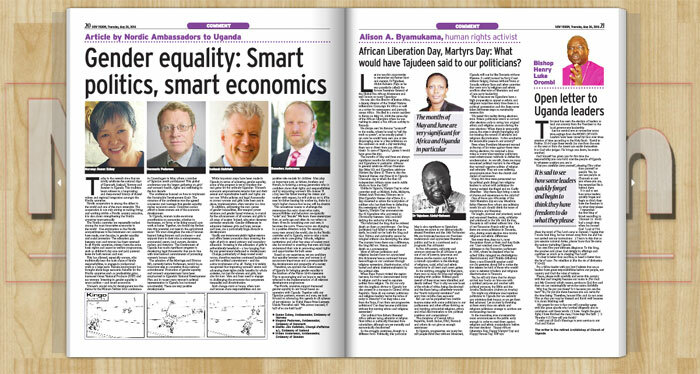 KARUMA DAM AND THE TOWN

This week's special Business pullout leads with the Karuma power dam construction and how it is propelling Karuma town.

Life has never been the same since the 600MW Karuma dam contruction began in Kiryandongo district three years ago, writes Titus Kakembo. In fact, the speculation that the dam would spur Karuma town to gain city status saw people rush there to buy land. 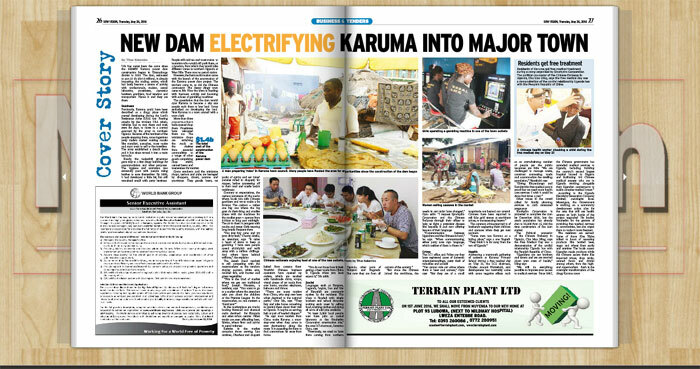 Fancy reading more on this? Flip the pages and get to page 26.

There is also a ton of business news to munch your breakfast tea, toast and cereal over: From Umeme paying out sh49b in dividends to Buganda land tenants registration resuming next month. 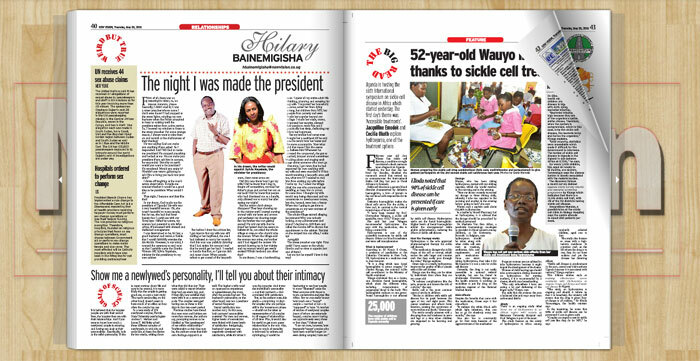 Yes, many of you know him as Dr Love, and he is back with his humorous spin to serious matters in a more palatable way. His article this week is titled 'The night I was made the president'

And in today's back pages, there is a cocktail of both local and international news for you sports lovers.

And one of them is about SC Villa, which has set up a disciplinary committee to investigate match fixing claims involving five of its players. Who are the players plunged into this saga and what are the repercussions? Page 48 is where to find that.

WOULD YOU LIKE TO READ TODAY'S NEW VISION PAPER ON THE GO? CLICK HERE FOR THE E-PAPER