SC Villa edges past Police to end winless ...
Next Story

It is the second largest sports fundraising event in the country

It is the second largest sports fundraising event in the country

Over 3000 runners are expected to participate in the second edition of the Uganda International Marathon due June 5, in Masaka.

Close to 2000 Ugandans will be joined by other international runners for the charity event that will have the top runners walk away with laptops, smart phones and music systems among other prizes including a weekend at the Brovad Sands Lodge on Ssese Island.

Addressing a press conference at Uganda Tourism Board offices yesterday, Andrew Bownds the Community Partnership Manager said the marathon that will have 10, 21 and 42km races is expected to raise close to sh600m.

"All proceeds from the race will go towards community based organisations in the greater Masaka with beneficiaries ranging from disadvantaged children, unemployed youth, the elderly, those with HIV/AIDS and disabled individuals," Bownds said.

The second largest sports fundraising event in the country is developed and funded by the Uganda International Marathon in partnership with CHEDRA; the organizations' local partners in Masaka.

UTB CEO Stephen Asiimwe thanked the organisers for coming up with the brilliant idea that has opened up opportunities for responsible tourism. He said the funds raised will help the youth in the area to gain meaningful employment. 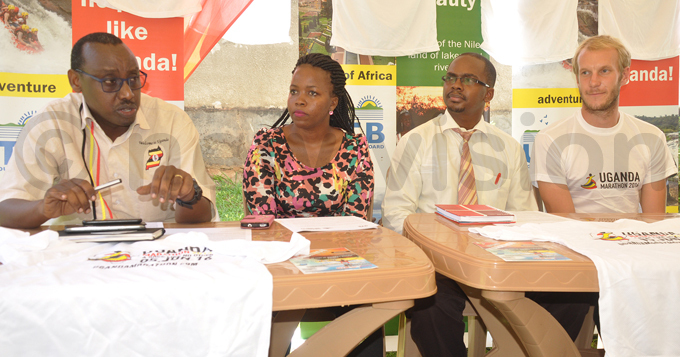 "The fact that we can mobilise people around a very good cause is wonderful for us at UTB and I applaud all sponsors that have come on board to support the noble cause. UTB endorses and supports this activity, and will be part and parcel of it; I ask our visitors to use this activity to sample what the country has to offer in terms of food, scenery," Asiimwe stated.

Sponsors for this year's run include Rwenzori, Coca Cola, Diamond Trust Bank and Movit who were represented at the press conference by Henry Tinkamanyire (UTB) and Doreen Hazel Nyangoma (Brovad Sands Lodge).

Chinese with no passports, work permits arrested in Mayuge