Nigerian government to meet unions over st...
Next Story

Kenyan riot police officers raise batons over a man during a demonstration of Kenya's opposition supporters in Nairobi, on May 16, 2016. Opposition protestors led by former Prime Minister Raila Odinga gathered outside the Independent Electoral and Boundaries Commission building to demand the dismissal of IEBC commissioners, after alleged bias towards the ruling Jubillee Alliance Party. CARL DE SOUZA / AFP

Kenya's police chief ordered an internal investigation Tuesday a day after officers were seen viciously beating an unresponsive fallen protester as they broke up demonstrations.

Some of the demonstrators, who were demanding the dissolution of the commission, threw stones at police.

"I condemn the lawlessness visited on the public by rioters yesterday and an internal inquiry is underway to determine whether any police officer broke any law while quelling the riots," Inspector General of Police Joseph Boinnet told reporters.

A video of the incident shows a man in a green sweatshirt running from police before falling to the ground. Three officers then take turns striking him with batons and kicking his motionless body as it lies slumped on the curb.

Hundreds of protesters were prevented from reaching the offices of the Independent Electoral and Boundaries Commission (IEBC) by police wearing body armour and carrying shields. There have been several such protests in recent weeks. 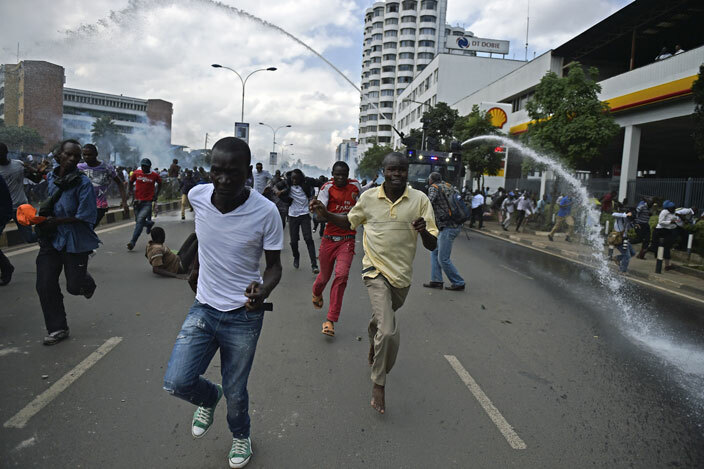 "The officers who have violated the rights of citizens by their brutality must face both disciplinary process and criminal prosecution," said Isaac Okero, president of the Law Society of Kenya, condemning the "bludgeoning of an apparently unconscious and unresponsive, unarmed man".

Raila Odinga, a former prime minister who lost his bid for the presidency in 2013, accuses the election commission of bias towards President Uhuru Kenyatta and has demanded new commissioners to be named ahead of elections due in August 2017.

Odinga and civil society groups accused the electoral commission of a series of irregularities that they said skewed the results.

The election nonetheless passed off peacefully, in contrast to the country's disputed 2007 elections which degenerated into fierce inter-ethnic violence that killed more than 1,100 people after Odinga's supporters challenged his defeat by Mwai Kibaki.

The next election is shaping up as a rematch of 2013, with 71-year-old Odinga aiming to unseat Kenyatta, 54.

"At this time all the country's leaders, now more than ever, must engage in dialogue that will help keep this nation peaceful," Okero said.

"They must desist from inflammatory statements that appear to sanction either excessive and violent police action or criminal conduct by citizens. They owe this to all of us."