"A full inquiry is required to urgently find out how this happened, why it happened and who will be held accountable," he said.

"A full inquiry is required to urgently find out how this happened, why it happened and who will be held accountable," he said.

Greater Manchester's mayor slammed the abandonment of Manchester United's game with Bournemouth on Sunday over what turned out to be a fake bomb as "outrageous", and called for a full inquiry.

Army bomb disposal experts carried out a controlled explosion of a suspicious package which was later revealed to be a dummy left behind by a private security company following a training exercise.

Prior to the detonation, the Stretford End and Sir Alex Ferguson Stand were evacuated, before the rest of United's 75,600 capacity Old Trafford ground was cleared as well, with the Premier League match against Bournemouth called off 20 minutes before Sunday's scheduled 1400 GMT kick-off.

With cities across Europe on high alert for terror attacks following fatal attacks in Paris and Brussels, Greater Manchester Police intially said they had discovered an "incredibly lifelike explosive device".

But Tony Lloyd, Greater Manchester's mayor and the elected police and crime commissioner for the region, said: "It is outrageous this situation arose.

"A full inquiry is required to urgently find out how this happened, why it happened and who will be held accountable.

"This fiasco caused massive inconvenience to supporters who had come from far and wide to watch the match, wasted the time of huge numbers of police officers and the army's bomb squad, and unnecessarily put people in danger, as evacuating tens of thousands of people from a football stadium is not without risk."

He added: "Whilst this in no way demeans the professionalism of the police and stewards responsible for getting the fans out, or the supporters' calmness and cooperation during the evacuation, it is unacceptable that it happened in the first place."

Evacuation 'right thing to do' 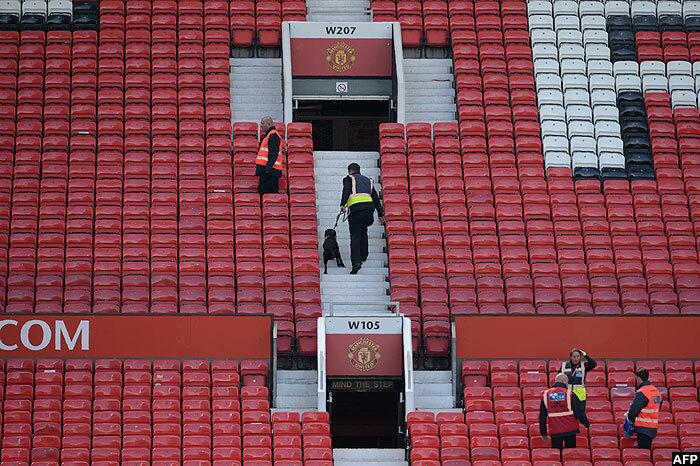 Greater Manchester Police (GMP) assistant chief constable John O'Hare said: "Following today's controlled explosion, we have since found out that the item was a training device which had accidentally been left by a private company following a training exercise involving explosive search dogs.

"Whilst this item did not turn out to be a viable explosive, on appearance this device was as real as could be, and the decision to evacuate the stadium was the right thing to do, until we could be sure that people were not at risk."

"It shows that it does work and it might be a pointless exercise for potential hoaxers, or even potential terrorists, to make a target of a football stadium," he told BBC Radio.

Manchester, one of England's major cities, was the setting last week for a series of mock terror attacks designed to test the response from emergency services.

One of those exercises involved staging a mock terror attack in the northwest hub's Trafford Centre -- Britain's second-largest shopping centre.

But police were accused of anti-Muslim prejudice after the fake bomber was heard to shout "Allahu Akbar" (God is great). They later apologised.

The postponed match, the two clubs' final Premier League game of the season, will now take place on Tuesday, May 17 at 1900 GMT.

Jamila loved God and people around her

He kept me in school when others lost hope in me