Residents banished him from the village shortly after police rescued him

The old woman is jursing injuries at Nkozi Hospital. Photo by Paddy Bukenya

Residents banished him from the village shortly after police rescued him

A 19-year old man had his leg hacked by a baying mob after he attacked his 80-year old grandmother over a plot of land.

Fred Ssentume, a resident of  Buwere village, Buwama sub county, Mpigi district was attacked by residents after his grandmother, Maria Nakafeero, raised an alarm for help.

Ssentume had attacked the hapless old woman with a panga after she reportedly refused to give him a piece of land.

He was only rescued by police from Buwama that responded to a frantic call.

Ssentume is reported to have attacked his grandmother after she refused to give him a plot of land part of which she had apportioned him. 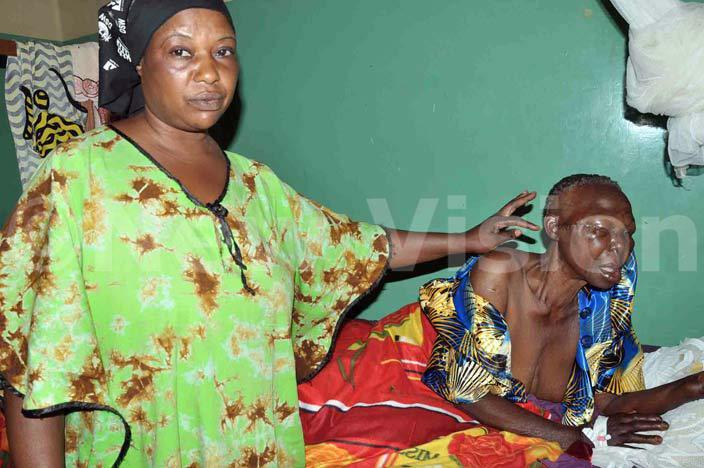 The old woman with her daughter at Nkozi hospital

He claimed he had right to the land since it had belonged to his late father, Gregory Ssentamu.

Residents, who accused him of smoking marijuana, said it could have been the motivation behind his senseless attack on his grandmother. They also banished him from the village shortly after police rescued him.

Wailing in pain, the grandmother lamented: "I raised this boy after his father passed away when he was still a child. Ever since I gave him part of my land and he built a house he has been wishing for my death so he can take the land."

The old woman spoke from her bed at Nkozi hospital where she is nursing injuries.

Police whisked SSentume to Butabika hospital for treatment and mental checkup before they proceed with charging him.

Yuasa sued over the death of eleven people