EAC thanked Germany for its support

Egon Kochanke stressing a point during to the discussion with the EAC Secretary General , Liberat Mfumukeko.

EAC thanked Germany for its support

The Ambassador of the Federal Republic of Germany to the United Republic of Tanzania, and also accredited to the EAC bloc, H.E. Egon Kochanke, on Monday paid a courtesy call to Liberat Mfumukeko, the Secretary General of the East African Community.

The Secretary General and his guest discussed a wide range of issues geared towards deepening cooperation between Germany and the East African Community.

Speaking during the discussion, the  EAC Secretary General, Mfumukeko, thanked the Government of the Federal Republic of Germany for its support to the EAC spanning the years since the re-establishment of the Cooperation between the three founding EAC Partner States to the present, when the Community has expanded to include the republics of Rwanda, Burundi and South Sudan.

On Burundi peace process, Mfumukeko briefed Kochanke that Burundi has made substantial progress in establishing and maintaining peace and stability. 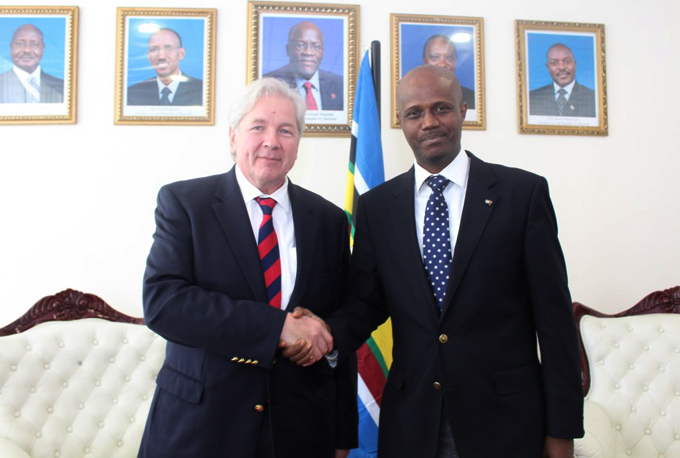 The  EAC Secretary General informed the Germany Ambassador that  South Sudan has been given six month to complete the ratification process of the Accession Treaty signed on 15th April 2016, after which the country will be a full member of the EAC.

On his part, Kochanke  congratulated Mfumukeko for his appointment and noted the impressive progress in the EAC integration process and re-affirmed to the Secretary General his country's continued support to the EAC Project and programs.

"We are very happy with our relationship with EAC and I am looking forward to a strong partnership in the development of the regional bloc", asserted the Germany Ambassador.

Present at the meeting were the EAC Deputies Secretary General in charge Planning and Infrastructure, Dr Enos Bukuku, and that of Political Federation, Charles Njoroge, and other officials from the EAC Secretariat.

Uganda Lobbies To Be On Williamses Tour

Here is the next tennis star