Afridi, believed to be in his mid-50s, has no access to a lawyer, and his appeal against a 23-year prison sentence has stalled

This file photograph taken on May 2, 2011 shows s crashed military helicopter is near the hideout of Al-Qaeda leader Osama bin Laden after a ground operation by US Special Forces in Abbottabad. Five years ago, elite United States forces shot and killed Osama bin Laden, ending a manhunt that began in earnest after his Al-Qaeda operatives hijacked planes and flew them into buildings in New York and Washington in September 2001. AFP PHOTO / STR

Afridi, believed to be in his mid-50s, has no access to a lawyer, and his appeal against a 23-year prison sentence has stalled

Five years after his fake vaccination programme helped the CIA track and kill Osama bin Laden, Pakistani doctor Shakeel Afridi languishes in jail, abandoned by the US, say supporters, in its bid to smooth troubled relations with Islamabad.

Afridi, believed to be in his mid-50s, has no access to a lawyer, and his appeal against a 23-year prison sentence has stalled.

"I have no hope of meeting him, no expectation for justice," his elder brother Jamil told AFP.

The former senior surgeon lives in solitary confinement in a small room, according to his lawyer, able to see his immediate family no more than six times a year.

Afridi's role in one of the most famous assassinations of recent decades is murky. 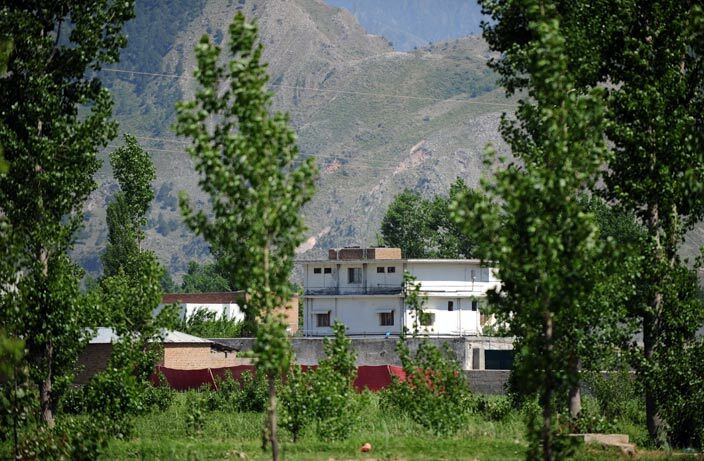 This file photograph taken on May 2, 2011, shows the hideout of Al-Qaeda leader Osama bin Laden after he was killed by US Special Forces in a ground operation in Abbottabad. Five years ago, elite United States forces shot and killed Osama bin Laden, ending a manhunt that began in earnest after his Al-Qaeda operatives hijacked planes and flew them into buildings in New York and Washington in September 2001. / AFP PHOTO / Farooq NAEEM

Details of how he was sought out by the Central Intelligence Agency are unclear -- Pakistani reports suggest officials at Save the Children acted as go-betweens, though the charity denies involvement.

What is known is that Afridi's job was to run a fake Hepatitis C vaccination program with the aim of obtaining genetic samples from Abbottabad, a garrison city and home to the Pakistan Military Academy, the country's answer to Westpoint.

It was there that Al-Qaeda chief bin Laden and his family had set up home in the mid-2000s, under the noses -- and some say protection -- of senior Pakistani military officers.

In the darkness of May 2, 2011, two helicopters full of elite Navy Seals touched down inside the compound.

In a dramatic raid just one kilometre (half a mile) from the military academy, they fought their way in and surprised the terror mastermind.

They shot him in the head and fled with his body, abandoning a damaged Black Hawk helicopter.

The killing was a huge success for US President Barack Obama, whose country was profoundly scarred by the attacks on New York and Washington of September 2001.

But it drove a wedge between Islamabad and Washington, with lingering suspicions that the Pakistanis had for years been covering up the whereabouts of one the world's most wanted men.

Weeks after the raid, Afridi was arrested and thrown in jail, accused of having ties to militants, a charge he has always denied.

Commentators believe Pakistan opted to punish Afridi in this way, rather than try him for treason -- aiding a foreign power -- because that would have entailed a public trial that would thrown a spotlight on Islamabad's role in harbouring bin Laden.

A furious US senate committee voted to cut aid to Islamabad by $33 million -- $1 million for each year of his original sentence.

The sentence was later cut by 10 years. This photograph taken on April 15, 2016, lawyer Qamar Nadeem, who represents Pakistani jailed doctor Shakil Afridi who was recruited by the CIA to help find Osama bin Laden, speaks in Peshawar. Five years after his fake vaccination programme helped the CIA track and kill Osama bin Laden, Pakistani doctor Shakil Afridi languishes in jail, abandoned by the US, say supporters, in its bid to smooth troubled relations with Islamabad. AFP PHOTO / A MAJEED

But since then, US pressure for Afridi's release has tapered off, and analysts say Washington has dropped the issue, preferring to concentrate on what its sees as more pressing matters -- such as negotiating with Islamist extremists in Afghanistan.

"The Taliban talks have taken priority over everything. The Americans don't want to muddy the water by raising other issues that are contentious," says Ahmed Rashid, a Pakistani author and security expert.

Qamar Nadeem, Afridi's lawyer who has been denied access to him for the past two years, believes his client's best hope for early release is US pressure, "But so far they have not shown their support," he says.

He is allowed to see his wife and children every two months or so, according to Nadeem. But an appeal against his sentence that began in 2014 is bogged down in adjournments and an uncooperative government.

Though elder brother Jamil and his siblings won a Peshawar High Court decision granting them visiting rights, that verdict has not been implemented, and he has been told by his lawyer that pursuing the matter could result in harm to the doctor.

"They are not admitting the High Court decision. What can I say? I am pessimistic," he said.

Author Rashid says justice for Afridi has gone by the wayside for the US, which would rather Pakistan use its influence with the Afghan Taliban to encourage them to restart peace talks with Kabul.

"The Americans have ceased to criticise Pakistan on many fronts," he said.

But Michael Kugelman, an analyst at the Woodrow Wilson Center in Washington said all hope is not lost for Afridi.

He said, rather than having abandoned him, the Americans may have decided that shouting about it is not going to work.

"In Washington the issue has likely moved off the front burner because it's clear that Pakistan isn't willing to play ball and negotiate an arrangement that could set him free," he said.

"(But) the Afridi issue has never really gone away, and my sense is that US officials quietly press Pakistan about it from time to time."

President says Kyotera is a backbone of NRM