Trump hits out at Clinton and Cruz ahead of Indiana primary

Donald Trump hit out hard at Hillary Clinton and Ted Cruz on Sunday, sounding unapologetic two days ahead of a key primary in Indiana he says will decide the Republican presidential race.

Speaking on "Fox News Sunday," Trump concentrated on attacking Clinton, doubling down on his much-criticized statement that the likely Democratic nominee's only appeal to voters is the "woman's card."

"She's done a lousy job in so many ways and even women don't like her," he said. "But it is the woman's card and she plays it and I will let you know in about six months whether or not she plays it well, but I don't think she'll play it well."

"If she were not a woman, she wouldn't even be in this race," he added.

Clinton dismissed his comments on CNN.

"I have a lot of experience dealing with men who sometimes get off the reservation in the way they behave and how they speak," she said, going on to criticize a talk Trump gave this week, billed as his first major foreign policy speech.

"I found it disturbing," she said.

With a path to the Democratic nomination for her rival Bernie Sanders virtually impossible, Clinton sounded confident looking ahead to November's general election, saying she would work with him to shape her party's platform.

The Vermont senator who calls himself a Democratic socialist wasn't throwing in the towel, however. He told CBS on Sunday that he could still win a majority of delegates: "It is difficult, it is not impossible."

The large support for him among young voters "means that our ideas are the future of the Democratic Party," he said. 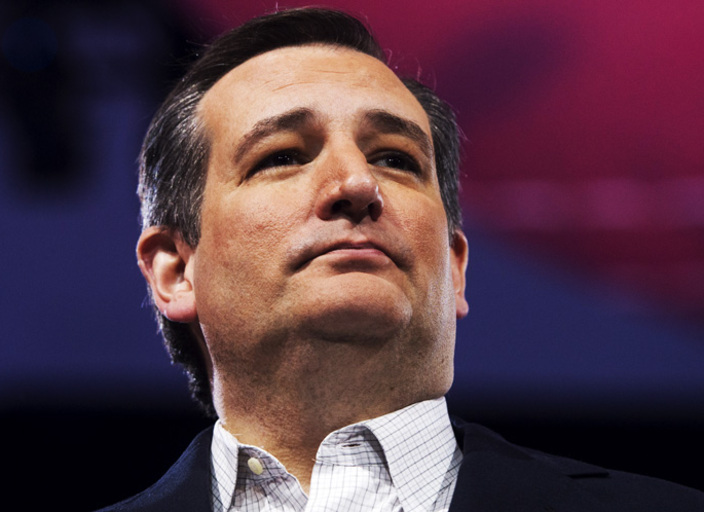 "No big deal, I didn't have a meeting or anything, I haven't seen Mike in years," the real-estate billionaire said on Fox.

Asked whether a victory for Trump in Indiana on Tuesday would clinch the nomination for him, Trump said, "Yes, it's over," adding, "I think it's over now."

The survey gave him 49 percent of likely Republican primary voters, followed by 34 percent for Cruz and 13 percent for the third-place candidate, Ohio Governor John Kasich.

Although Trump has beamed with confidence at his Indiana rallies, the GOP battle is going down to the wire.

The debate over Trump is focused on whether he can win a majority of the 2,472 delegates who choose the nominee at the Republican convention in July.

Should he reach the magic number of 1,237, the nomination is his because nearly all delegates are bound to vote for their candidate in the first round.

If Trump falls short before the convention, Cruz hopes to snatch the nomination on a second ballot when most delegates become free to vote for whomever they choose.

Trump currently has 1,002 delegates, compared to 572 for Cruz and 157 for Kasich, according to a CNN tally.

Speaking on ABC's "This Week," Cruz dismissed the contention that with it being "mathematically impossible" for him to clinch the nomination in the first ballot, winning on the second ballot would be seen as stealing the nomination.

"Nobody's going to clinch it on the first ballot," the conservative US senator from Texas said. "It's why Donald Trump is so desperate to say the race is over now."

Cruz fired back at Trump, saying on CBS's "Face the Nation" that the tycoon "is attempting to perpetuate one of the greatest frauds in the history of modern elections, which is he is trying to convince people that he's some sort of outsider."

"Donald and Hillary are really flip sides of the same coin," he added. "If we end up in the general election having two candidates on the ballot who are both big government, rich New York liberals, we will have profoundly failed this country."

Cruz evaded questions about whether he would bow out of the Republican contest if he loses in Indiana.