The handbook is an excellent guide in improving the delivery of justice to children, strengthening child protection structures and helping build a protective environment for children

The handbook is an excellent guide in improving the delivery of justice to children, strengthening child protection structures and helping build a protective environment for children

The Government of Uganda and UNICEF on Wednesday launched a child-friendly justice handbook to guide prosecutors and other actors in the criminal justice system, in handling child-related cases in a child-friendly and gender responsive manner.

The UK government provided financial support to the process through UNICEF.

The handbook will be used by prosecutors and other state as well as non-state actors and institutions in the criminal justice system.

Mike Chibita, the Director of Public Prosecutions, says the handbook is an excellent guide in improving the delivery of justice to children, strengthening child protection structures and helping build a protective environment for children.

Chibita adds that it will subsequently lead to the rehabilitation and reintegration of children in conflict with the law. 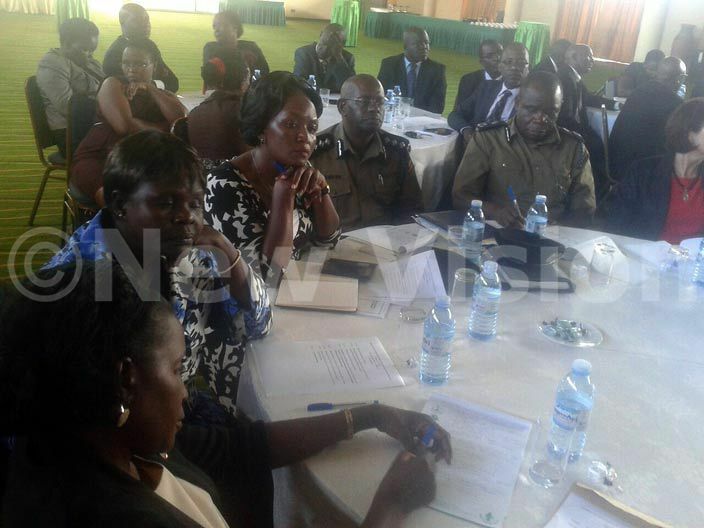 Guests at the launch of the Child Friendly Justice Handbook at Golf Course Hotel. Photo by Ramadhan Abbey

Also as part of the process of the development of the handbook, the Director of Public Prosecutions appointed a task force consisting of prosecutors and members of the DPP policy unit that conducted field consultations, which identified gaps and challenges in the implementation of a child friendly criminal justice system.

The consultative meetings established that one of the main problems faced by prosecutors, adjudicators and investigators was the failure to understand and therefore apply the concept of "child friendly justice".

In 2012, the Uganda Police Force arrested an average of six juveniles per 100,000 of the child population.

However, the report noted that more often than not, prior to sentencing, child offenders are held with adults, due to lack of separate holding facilities at police stations, which increases the risk of violence, abuse and exploitation.

The report also laments of that conditions of detention are sometimes sub-standard, overcrowded and deny children their rights, such as the right to legal representation, parental access, and appropriate standards of health.

The UN Convention on the Rights of the Child (UNCRC) which Uganda signed recognises the importance of child friendly justice.

In addition, the African Charter on the Rights and Welfare of the Child also highlights the right of the African child to special treatment in a manner consistent with the child's sense of dignity and worth and which reinforces the child's respect for human rights and fundamental freedoms of others.

It prohibits child labour and harmful cultural practices that put children at risk. At national level, the Constitution of Uganda sets out rights of children, including of those in conflict with the law.

The Children's Act Cap 59 further makes specific provision on the processes of arrest and charging; pre-trial detention and hearings, adopting the child rights based approach.

However, despite the existence of the mentioned legal frameworks, the justice system in Uganda is still faced with severe constraints especially as far as child protection and justice is concerned.

With the existing system, children are marginalised by the limited application of a child-rights based approach by relevant institutions charged with child justice and inadequate systems and procedures for justice for children.

Noreen Prendiville, the UNICEF Deputy Representative in Uganda emphasised that "no matter how children come into contact with judicial or non-judicial proceedings, their rights have to be protected from the time they enter into the formal justice system to completion."

Regarding sexual violence, the Government of Uganda has undertaken steps to address sexual violence by enacting a gender sensitive constitution and drafting laws that prohibit violence against women and children, including the 2007 Penal Code Amendment Act No. 8, the Domestic Violence Act, the Prevention of Trafficking in Persons Act 2009 and The Prohibition of Female Genital Mutilation Act 2010.