The DPC of Kaberamaido inspects the abandoned Rocket Proprelled Grenade (RPG) in his office. It was found in a local garden. (Credit: Michael Onyinge)

An abandoned bomb has been found in a garden in Apokor village, Oyomai parish, Kakure sub-county in Kaberamaido district.

The District Police Commander, Ahmed Madiri, said the bomb was seen by local people who were ploughing their garden.

He said the bomb is suspected to have been abandoned by either the Lord's Resistance Army (LRA) rebels or by the UPDF during their fight in the area in 2003.

One of the men who found the bomb said they initially thought it was a cassava tuber.

"My friend first told me it was a cassava tuber but upon close checking, we discovered it was a different thing. This made us to report the matter to police and even abandoned ploughing," said Pius Elelu.

When the report came through, Madiri said he dispatched his team to rush to scene for immediate verification and picking the said bomb.

"This is one of the most dangerous bombs. It is used mainly for hitting where many enemies are gathered together or for hitting moving vehicles," he said inside his office on Tuesday.

He said the grenade will be taken to experts to find ways of destroying it. 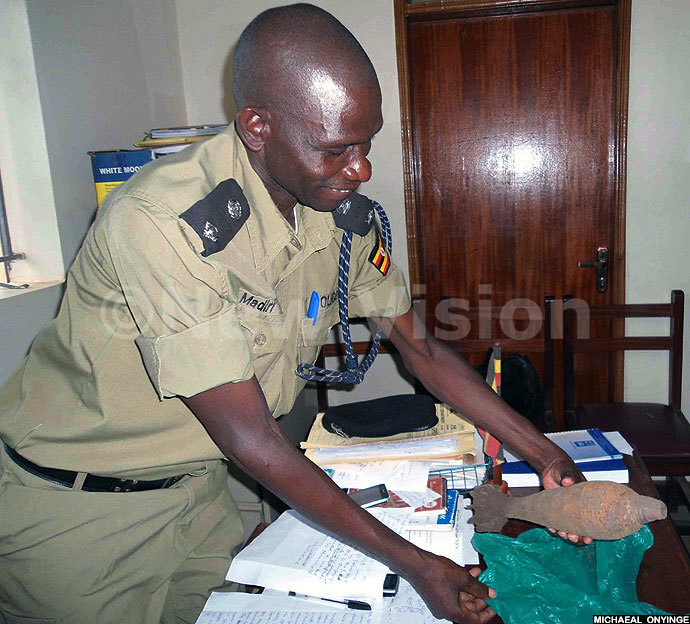 With the insurgency that occurred in the district in 2003 when the LRA invaded Teso and Kaberamaido districts in mind, Madiri suspected that it is what could have led the bomb to be abandoned.

He said the grenade was likely launched but failed to explode or it just fell from one of the patrolling soldiers.

"We have always advised our local people during community policing that whenever anything is got and it is suspected to be a bomb, it should be reported to the authorities immediately for an appropriate action to be taken," he said.

Madiri also had this warning call: "Nothing should be taken for granted. Whether it is a wrapped polythene bag or a metal, as long as people suspect it to be a bomb, it should be reported immediately."

Only last week, a suspected bomb was reportedly sighted at Lira main market, causing fear among the locals.

But after police investigations, it was found that it was not a bomb.

Meanwhile, the LC3 chairperson of Kakure sub-county, Willy Ebayu Echengu, said it was the second time that an abandoned bomb had been recovered in his sub-county.

"This was a battle ground between LRA rebels and Arrow Boys who helped the UPDF. I believe some more [bombs] could still be there buried in the ground."