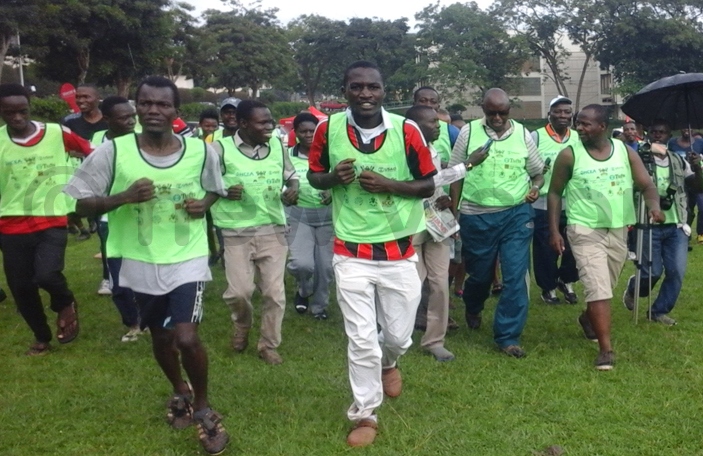 The Ministry of Agriculture, Animal Industry and Fisheries in partnership with Makerere University College of Veterinary Medicine, Animal Resources and Biosecurity (COVAB) , is set to carry out free rabies vaccinations for dogs and cats in 50 districts.

The vaccination exercise kicks off Tuesday with the five divisions of Kampala. The divisions include Rubaga, Kawempe, Nakawa and Makindye.

Speaking while flagging off the One Health Run at Makerere University ahead of World Veterinary day, the State Minister for Agriculture, Maj. Bright Rwamirama stressed that more than 70 % of the diseases in humans are of animal origin.

He said Rabies and brucellosis diseases are the commonest diseases affecting people. He said this year's theme 'continuing education with one health' will bring medical doctors and veterinarians work together.

"Working together is the way we can effectively deal with some of the challenges," he noted.

Early this year government procured 3000 dosages of vaccines to vaccinate dogs and cats across the country. Other districts to benefit from vaccinations include Mityana, Wakiso, Mpigi, Arua, Moyo and Bundibugyo.

Rabies is caused by a virus that affects the central nervous system, particularly causing inflammation in the brain. The virus is transmitted to humans via bites and scratches from infected animals. According to ministry of health weekly reports, over 30 cases of dog bites are registered.

Prof. Lawrence Mugisha from the department of Wildlife and Aquatic Resources COVAB said the highest cases of rabies are reported in Arua, Kasese and Mitooma districts.

"Recently a family of five was affected with rabies in Arua district" he said.

Mugisha noted that once a person begins to exhibit signs of the disease, survival is rare adding that the victim can die within eleven days.

The first symptoms of rabies may be very similar to those of the flu including general weakness or discomfort, fever, or headache, biting objects and running mad among others.

According to the World Health Organization (WHO), up to 59,000 people worldwide die from rabies every year. Ninety nine percent of them have been bitten by a rabid dog.

Domestic dogs, cats, and rabbits, and wild animals, such as skunks, raccoons, and bats, are able to transfer the virus to humans via bites and scratches.

Meanwhile cases of Brucellosis are on the rise in the cattle corridor.